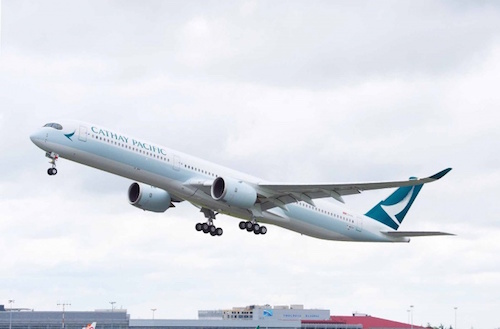 Cathay Pacific Airways has become the second airline to operate the A350-1000, the world’s newest long range widebody airliner.

The airline took delivery of the aircraft at a special event in Toulouse, France. The aircraft is the first of 20 A350-1000s ordered by Cathay Pacific and will join the carrier’s growing fleet of A350 XWB aircraft, which already includes 22 A350-900s. Both aircraft are complementary and provide for maximum commonality with improved operating efficiencies.

With its true long-range capability, the A350-1000 will form an important part of Cathay Pacific long-haul operations. The aircraft will be deployed on the airline’s new non-stop route from Hong-Kong to Washington DC, representing the longest flight – approximately 17 hours – performed by any airline out of Hong Kong.

Paul Loo, Cathay Pacific chief customer and commercial officer, said: “We already have one of the youngest long-haul fleets in the sky, and with the arrival of the A350-1000, our fleet is only going to get younger.

“The aircraft follows the successful entry of the A350-900 variant which has enabled us to expand our long-haul network at a near unprecedented rate.

“The A350-1000 has an incredible range, is remarkably fuel efficient and quiet, provides customers with an unsurpassed cabin environment and has extremely attractive operating economics.”

The A350-1000 is the latest member of Airbus’ leading widebody family, showing high level of commonality with the A350-900 with 95 per cent common systems part numbers.

As well as having a longer fuselage to accommodate 40 per cent larger premium area (compared to the A350-900), the A350-1000 also features a modified wing trailing-edge, new six-wheel main landing gears and more powerful Rolls-Royce Trent XWB-97 engines.

Eric Schulz, Airbus chief commercial officer, said: “We are proud to deliver the A350-1000 to our long-standing customer Cathay Pacific.

“Bringing major advantages in fuel and cost efficiency along with unrivalled passenger comfort, the A350-1000 is the perfect platform for Cathay Pacific to increase capacity on some of its longest routes.

“The combination of the world’s newest widebody and Cathay Pacific’s world famous in-flight service will ensure that the airline can strengthen its position even further as one of the world’s leading international carriers.” 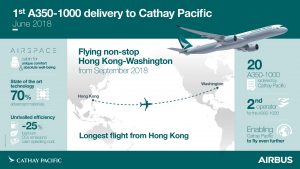