Airbus has revealed the A220 at a ceremony held at its Henri-Ziegler Delivery Centre, near Toulouse, France. Witnessed by Airbus employees and members of the global news media, the A220-300 landed directly from the painting at 12:25 am CEST wearing its new Airbus name and colours.

“Everyone at Airbus has been looking forward to this historic moment. Today, we are thrilled to welcome the A220 to the Airbus family and are honoured to see it wearing its new Airbus colours for the first time,” said Guillaume Faury, Airbus President Commercial Aircraft, “I pay tribute to all the women and men at Bombardier and the supply chain who have strived over the past years to bring this fantastic aircraft to the world. The A220 now enters a new phase in its career with all Airbus’ ressources behind it to further its commercial success worldwide.”

Eric Schulz, Airbus Chief Commercial Officier, added: “We are enthusiastic about selling the A220 thanks in particular to its technology which gives it a decisive edge in a very competitive market. I have received a lot of positive feedback from customers regarding the aircraft’s outstanding passenger experience, its lower fuel burn, lower weight and quieter engines. All these reasons contribute to my optimism that Airbus will support to make the A220 a great commercial success.”

A European-Canadian partnership
Airbus’ global reach and scale combine with Bombardier’s state-of-the-art jet aircraft in the A220 Family, now being produced in a partnership between Airbus and Bombardier.

Airbus manufactures, markets, and supports A220 Family aircraft under the aegis of the Airbus-Bombardier partnership, with Bombardier’s two jetliners – previously designated the C Series – being brought into the Airbus commercial aircraft line-up.

These airplanes fill an important niche – covering the segment that typically accommodates 100-150 seats – and responding to a worldwide aviation market for smaller single-aisle jetliners estimated at some 6,000 such aircraft over the next 20 years.

High efficiency, low risk
A220 Family aircraft have been specifically designed for the 100 -150 seat market, resulting in efficiencies inherent in purpose-built aircraft with an unmatched environmental scorecard. What’s more, the A220-100 and A220-300 have over 99 percent parts commonality between them, as well as the same pilot type rating, facilitating the family’s addition to an airline’s fleet.

Up to 5,440 kg lighter than their competitors, A220 Family jetliners were designed using state-of-the-art computational aerodynamics combined with 21st century supercomputing capability; the result is a family of aircraft with optimal aerodynamic performance and reduced drag. Powering the aircraft are twin Pratt & Whitney PurePower PW1500G geared turbofan engines specifically designed for this jetliner product line. With a bypass ratio of 12:1 – one of the highest of any turbofan engine in the world – the engines feature 20 percent lower fuel burn per seat than previous generation aircraft, half the noise footprint, and decreased emissions.

Together, the A220 Family represents the most efficient aircraft in the skies in their class, with up a low cost per trip, as well as the lowest noise levels of any commercial jet in production. This makes the A220 Family aircraft ideal for urban operations and noise-sensitive airports.

Superior single-aisle comfort
A220 Family aircraft are designed to deliver the feel of a widebody jetliner in a single-aisle aircraft. The cabin provides space where it matters the most, leading to an unparalleled passenger experience.

Overhead bins, with the largest stowage capacity in their class, are easily accessible. The windows, extra large and plentiful with more than one at each row, are positioned high on the cabin sidewall to provide an optimal viewing angle and an abundance of natural light. Wide seats –18 inches or more – provide personal space without compromise, and the newly designed engines contribute to the quietest cabin in the A220 Family category. 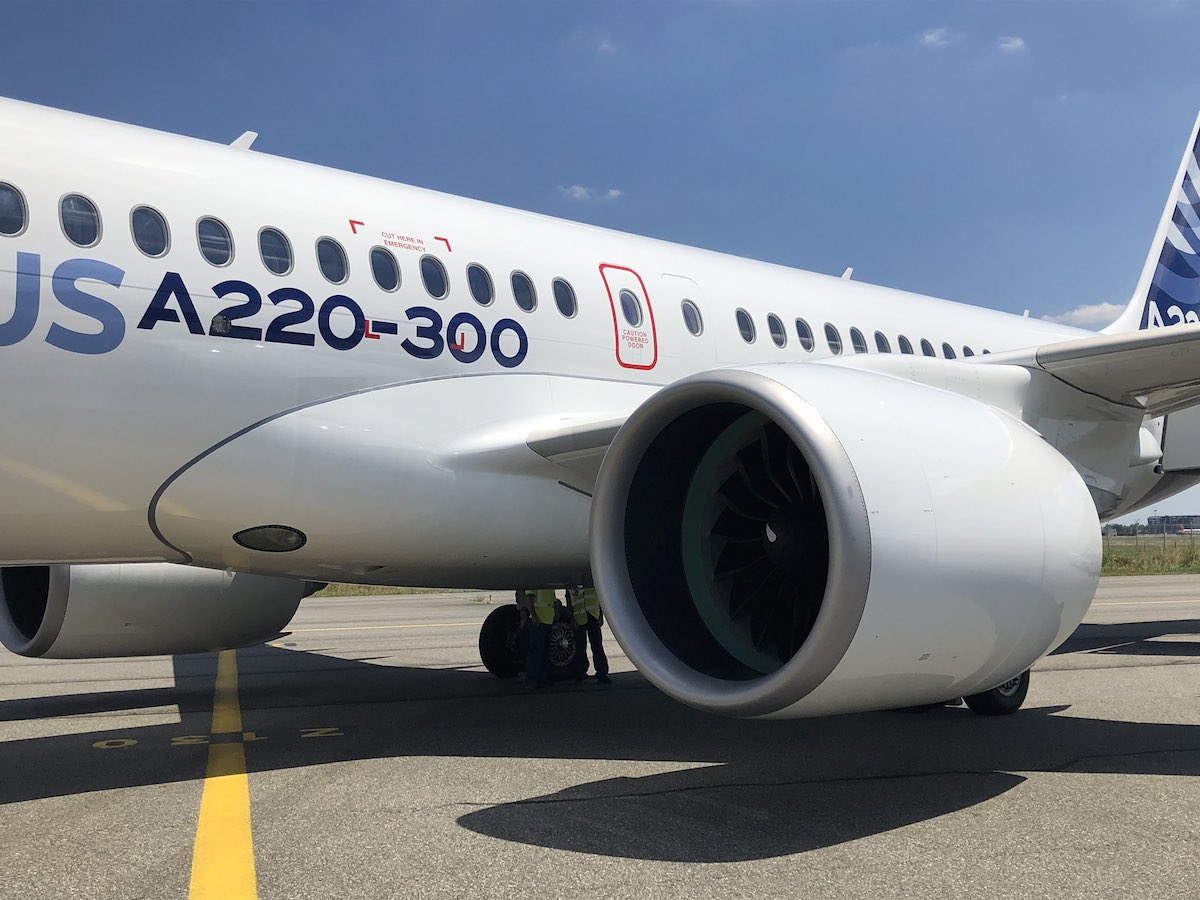 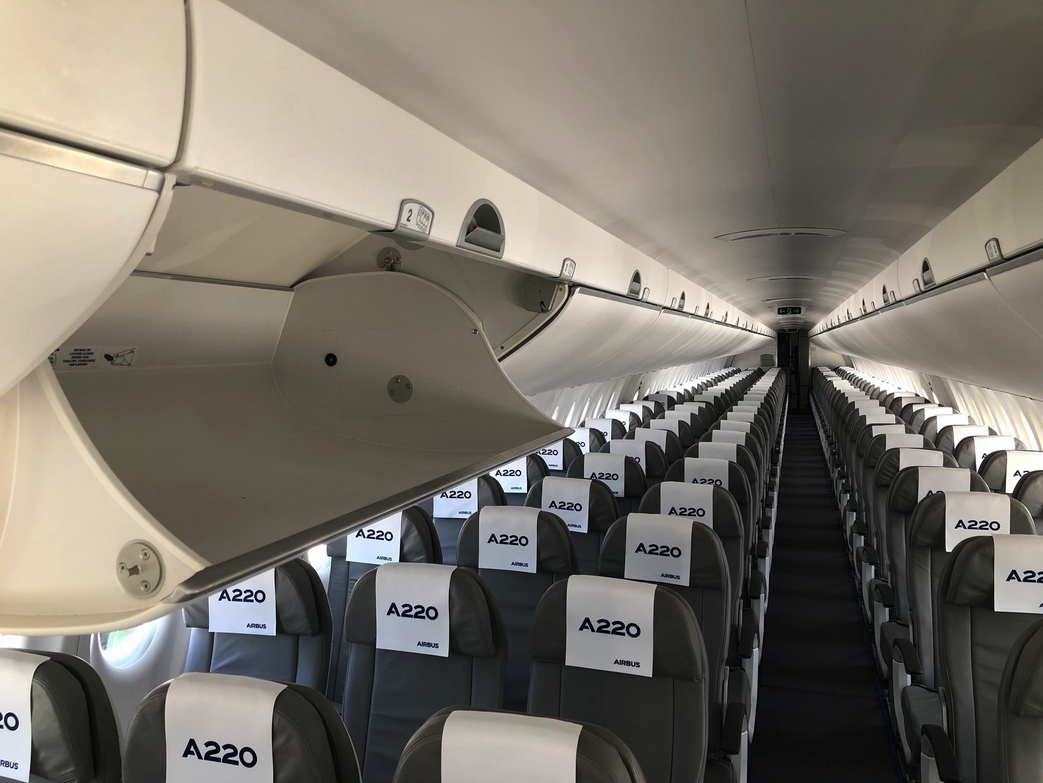 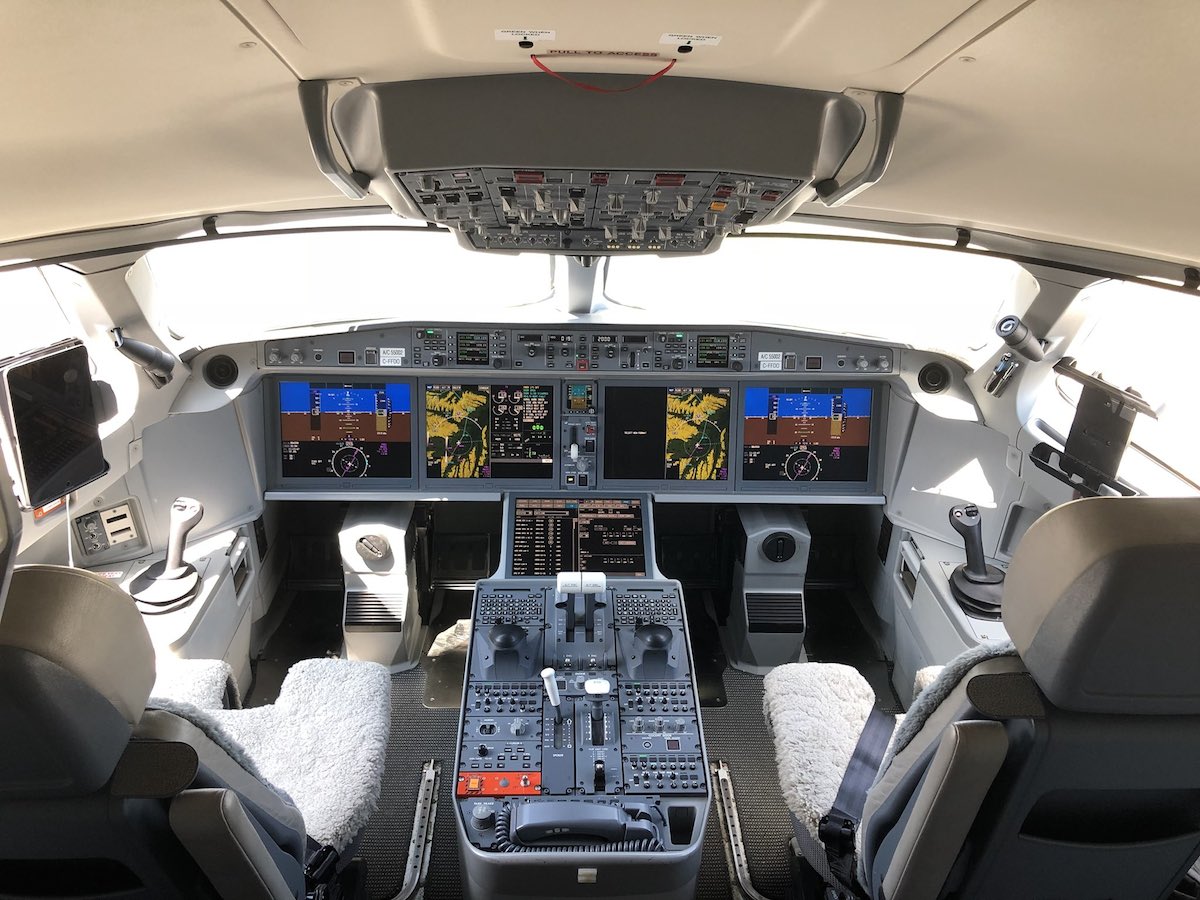