The national carrier of the State of Qatar flies hand-painted aircraft in FIFA livery to Moscow for 2018 FIFA World Russia Finals and Semi-Finals.

Qatar Airways, an Official Partner and the Official Airline of FIFA, has taken its celebration of the 2018 FIFA World Cup Russia to the skies with a specially-branded Boeing 777 aircraft painted in FIFA livery, ahead of the tournament’s Semi-Final and Final match.

The bespoke aircraft, which features distinctive FIFA branding, was hand-painted in Ireland and flown to Doha, where a press conference was held at Hamad International Airport before the aircraft flew to Moscow just in time for the tournament’s Semi-Final and Final matches. 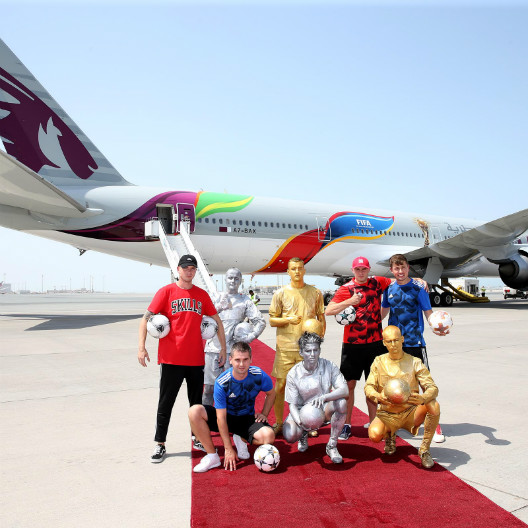 Qatar Airways Group Chief Executive, His Excellency Mr. Akbar Al Baker, said: “We are tremendously excited to celebrate our passengers’ love for football by bringing this unique, one-of-a-kind aircraft to Moscow. As Official Partner and Official Airline of FIFA, we are proud to be able to unite football fans from around the world in Russia, helping them to experience the magic of the FIFA World Cup. This beautiful aircraft further cements our commitment to our important partnership with FIFA, as well as our loyalty to millions of football fans around the globe who have gathered in Russia to cheer their teams on”.

“We look forward to celebrating in the upcoming days with fans, both in Russia and around the world.”

Engr. Badr Mohammed Al Meer, Chief Operating Officer at Hamad International Airport stated: “As we prepare for the 2022 FIFA World Cup Qatar, we are thrilled to witness our national carrier celebrate the 2018 FIFA World Cup Russia with this truly unique and spectacular aircraft. This moment encapsulates the spirit of the FIFA World Cup, celebrating football, art and culture on an international scale.”

Qatar Airways kicked off its celebration of the tournament by teaming up with singer and TV star Nicole Scherzinger for a re-recording of the classic song ‘Dancing in the Streets’, which resulted in an upbeat and infectiously fun-filled ‘musical’ style TV commercial. The song expresses the airline’s firm belief that sport is a universal language, which has the power to inspire and encourage people to follow their dreams, with the commercial having a global reach to date of 2.6 billion people.

In December 2017, Qatar Airways launched daily services to the cultural capital of Russia, St. Petersburg, doubling the number of Russian routes operated by the carrier. The addition of St. Petersburg to Qatar Airways’ route map demonstrates the importance of the Russian market to the carrier, which has been flying to Moscow since 2004. The award-winning airline currently operates three daily flights between Moscow and Doha, in addition to a daily flight between St. Petersburg and Doha.

In April, Qatar Airways signed an MoU with Moscow’s Vnukovo International Airport, Russia’s third-largest airport, committing to a potential acquisition of up to 25 per cent of the airport’s total shares, complementing the strong ties established with the country, and in support of the airline’s existing investment strategy.

To celebrate the Year of Culture between the State of Qatar and Russia, the airline also earlier this year announced a five-year partnership with Cosmoscow International Contemporary Art Fair, a prestigious event that unites the contemporary Russian art market and helps its contributors establish contacts with the international art community.

Qatar Airways proudly flies one of the youngest fleets in the skies, featuring the world’s most technologically-advanced aircraft. In February, the airline was the global launch customer for the A350-1000, the latest member of Airbus’s wide-body aircraft portfolio. The A350-1000 offers cutting-edge lightweight carbon composite design, as well as incredibly fuel-efficient Rolls-Royce Trent XWB-97 engines, bringing major advantages in fuel and costs efficiency.

Leading the host of awards received by the airline last year is the prestigious accolade of 2017 ‘Airline of the Year,’ awarded by the 2017 Skytrax World Airline Awards, which was held at the Paris Air Show. This is the fourth time that Qatar Airways has been given this global recognition. In addition to being voted Best Airline by travellers from around the world, Qatar’s national carrier also won a raft of other major awards at the ceremony, including ‘Best Airline in the Middle East,’ ‘World’s Best Business Class’ and ‘World’s Best First Class Airline Lounge’.

Qatar Airways recently revealed a host of upcoming new global destinations, including the announcement that it will be the first Gulf carrier to begin direct service to Luxembourg. Other exciting new destinations to be launched by the airline include Tallinn, Estonia; Valletta, Malta; Cebu and Davao, Philippines; Langkawi, Malaysia; and Da Nang, Vietnam.