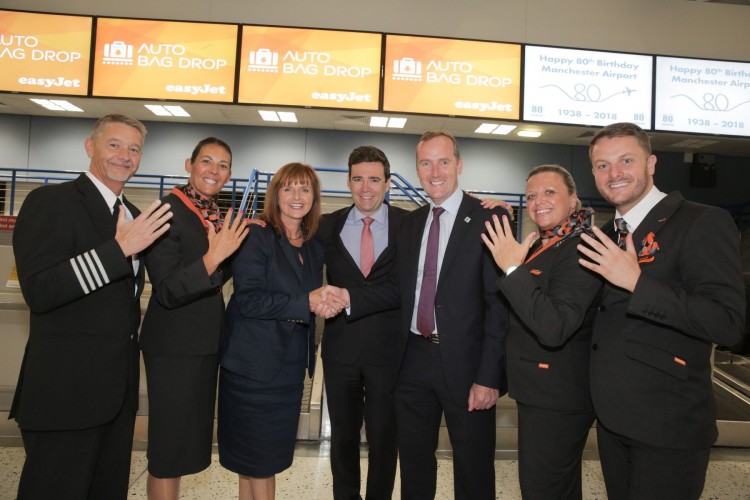 easyJet, Europe’s leading airline, has today announced that it’s to undertake its largest ever expansion at Manchester Airport in winter 2018 which will see the airline adding five new aircraft, carrying an extra 1.5m passengers annually and launching five new routes.

With the expansion easyJet will create 175 direct jobs and it’s estimated the move will also lead to 1500 indirectly*, providing a boost to the economy of Greater Manchester with new economic connections for the region to new destinations of Innsbruck, Lanzarote, Faro, Barcelona and Bordeaux – the 1000th for the airline. On sale today the new routes will commence from 2 November 2018.

easyJet flew over 3.5 million passengers from Manchester last year alone, having flown over 10m since the airline commenced operations in 2008. The increase in capacity from 12 to 17 aircraft to 5m passengers a year following expansion represents a 40% increase in growth.

The aircraft will include easyJet’s new A320neo’s which were introduced to the airport last year and enable a 15% reduction in fuel burn, a 15% reduction in CO2 emissions and a 50% noise footprint reduction during the landing and take-off phases compared to the current generation A320 aircraft thereby significantly reducing our impact on local communities.

The airline has flown to and from Manchester for the past 10 years and this expansion will mean more choice for passengers, more regular services to popular destinations and more affordable fares.

“This announcement to expand our operations in Manchester is fantastic news for the North West and will create thousands of new jobs supporting the local economy and both inbound tourism as well as even more choice for consumers in the North West.

“Our growth of an additional five aircraft next summer will be the biggest single investment easyJet will make in the entire network in 2019, and reflects our commitment to Manchester, providing customers even better connectivity with new NEO aircraft to new destinations and more choice than ever before.”

“We’re delighted to see easyJet’s commitment to Manchester Airport and the region with the announcement of five new aircraft and five new routes. It will provide our passengers with even greater choice when they come to book their holidays.

“Their growth will also create hundreds of jobs, which along with the £1bn investment we are making in the transformation of the airport, demonstrates the various ways in which the region benefits from having a thriving international gateway.”

“This expansion by easyJet is to be welcomed and is clear evidence that Greater Manchester is a globally-facing city-region that’s open for business. It is vital that Greater Manchester remains a well-connected travel hub and the creation of five new routes from Manchester Airport will provide us with new business opportunities as well as exciting new travel destinations.

“easyJet’s endorsement of the Airport as the base not only for new routes but their milestone 1,000th route demonstrates Greater Manchester is one of the world’s most outward-facing, dynamic and thriving city-regions. We look forward to continuing to welcome visitors from across the globe.”

In 2017 almost 3.5 million passengers flew with easyJet to and from the airport – a figure which is expected rise to 5 million next year.