Swiss International Air Lines (SWISS) is to become the first passenger airline in the world to take advantage of the new AeroSHARK aircraft skin technology by applying the innovative riblet film to its Boeing 777-300ER passenger aircraft fleet. Its investment in this new technology will enable SWISS to substantially reduce its Boeing 777 fleet’s carbon dioxide (CO2) emissions and fuel consumption. AeroSHARK is a new biomimetic film which has been jointly developed by Lufthansa Technik and BASF. The film features millions of ‘riblets’ – small protrusions just 50 micrometres high – which replicate the highly hydrodynamic skin of sharks, and thus reduces an aircraft’s aerodynamic drag wherever it is applied.

Annual CO2 emission savings of up to 15,200 tonnes 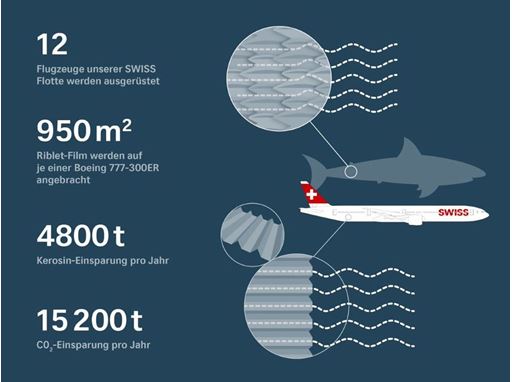 By applying a total of 950 square metres of AeroSHARK riblet film to the fuselage and engine nacelle surfaces of a Boeing 777, fuel savings of some 1.1 per cent can be achieved. This will reduce its annual fuel consumption by over 4,800 tonnes and the total annual carbon dioxide emissions of the SWISS Boeing 777 fleet by up to 15,200 tonnes – the amount emitted respectively by some 87 long-haul flights from Zurich to Mumbai.

“Reducing its environmental footprint is one of the greatest challenges ahead for the aviation sector, and being carbon-neutral in our flying by 2050 is a key SWISS strategic objective,” says SWISS CEO Dieter Vranckx. “We put a major emphasis at SWISS on actively promoting and making targeted investments in new technologies. And we’re delighted that, in becoming the world’s first passenger airline to use the innovative AeroSHARK technology, as we’ll be doing with our Boeing 777 fleet, we’ll now be making a further substantial contribution to ensuring more sustainable travel.”

SWISS will successively install the new AeroSHARK riblet film on its Boeing 777 fleet from mid-2022 onwards. The work will be performed when each aircraft’s downtimes permit.

SWISS involved in AeroSHARK’s development, too

SWISS has also supported Lufthansa Technik and BASF in their development of the AeroSHARK film for the Boeing 777. Back in summer 2021, the aerodynamic performance of a Boeing 777 wing was precisely monitored throughout a scheduled SWISS Zurich-San Francisco flight. The data collected have enabled Lufthansa Technik to devise high-precision 3D airflow simulation models which will be used in the near future to develop the AeroSHARK riblet film for additional application to the Boeing 777’s wings, to tap further fuel and emission savings potential.

The adoption of the new AeroSHARK technology is a key initiative in SWISS’s broader endeavours to minimize its carbon dioxide emissions. It also underlines the company’s commitment to promoting the use of innovative technologies. SWISS has set itself the objectives of halving its net CO2 emissions from their 2019 levels by 2030 and of making its business and operations carbon-neutral by 2050.