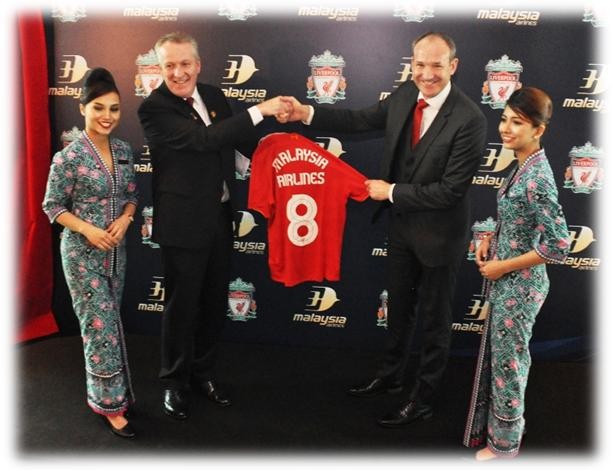 Under the partnership, Malaysia Airlines will be exclusively designated as the “Official Global Airline Partner of Liverpool Football Club”.

The deal will provide Malaysia Airlines numerous benefits including: LED and static board brand exposure at each home game at Anfield stadium, and exposure on the Liverpool FC website, publications and Facebook page, besides co-branding opportunities in merchandising rights and customer engagement via experiential experiences, such as pitch side access, in Liverpool with players and legends.

The airline will also have access to players to be featured as ambassadors and in all related communication materials.

Record winner of eight League Cups, Liverpool FC is one of the best-supported clubs worldwide and allows Malaysia Airlines to reach an international audience of more than one billion.

This is especially so in key markets such as China where Liverpool has around 40 million followers. Additionally, Malaysia Airlines will benefit from football clinics with Club International Academy coaches delivering coaching and coach education programmes both on and off the pitch.

This enables the airline to provide exposure to young Malaysian players, providing them access to both the best coaching environment and coaching expertise possible, following the same curriculum that is delivered to Liverpool stars.

“Both brands have a long and illustrious history with similar cultures rooted around a sense of family.  Liverpool FC is one of the most followed clubs in the world, including around 100 million in south-east Asia and 40 million in China, our key markets.

“Additionally, the partnership will go a long way in increasing awareness of Malaysia, as a tourist destination, to a huge global audience.”