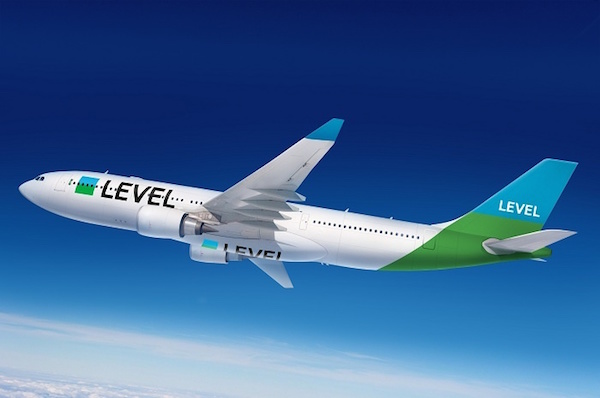 The carrier will take to the skies in June, with flights from Barcelona to Los Angeles, San Francisco (Oakland), Buenos Aires and Punta Cana. LEVEL will fly two new Airbus A330 aircraft branded in its own livery and fitted with 293 economy and 21 premium economy seats.

Initially it will be operated by Iberia’s flight and cabin crew and will create up to 250 jobs based in Barcelona. Barcelona has been chosen as the first European city for the launch of IAG’s new operation but LEVEL will look to expand its flights from other European cities.

Checked luggage (in addition to a free cabin bag), meals, seat selection and the latest movie releases will be complimentary for customers flying in premium economy. Those travelling in economy can chose what they want to buy based on a menu of choices. All customers will have access to next generation inflight technology with a wide range of on-board entertainment options. High speed internet connectivity will also be available.

Willie Walsh, IAG chief executive, said: “LEVEL is an exciting new IAG airline brand which will bring a stylish and modern approach to flying at prices that are even more affordable. It will benefit from having the strength of one of the world’s largest airline groups behind it.”

“LEVEL will become IAG’s fifth main airline brand alongside Aer Lingus, British Airways, Iberia and Vueling. It will complement our existing airline portfolio and further diversify our current customer base. Barcelona is Vueling’s home base and this will allow customers to connect from Vueling’s extensive European network onto LEVEL’s long-haul flights. This is just the start.”

“We’re really excited about the opportunities for expansion and we plan to bring LEVEL to other European destinations.”

LEVEL’s customers will be able to earn and redeem Avios – the loyalty currency for IAG’s airlines. This will give them the opportunity to fly to 380 destinations across the group’s network.