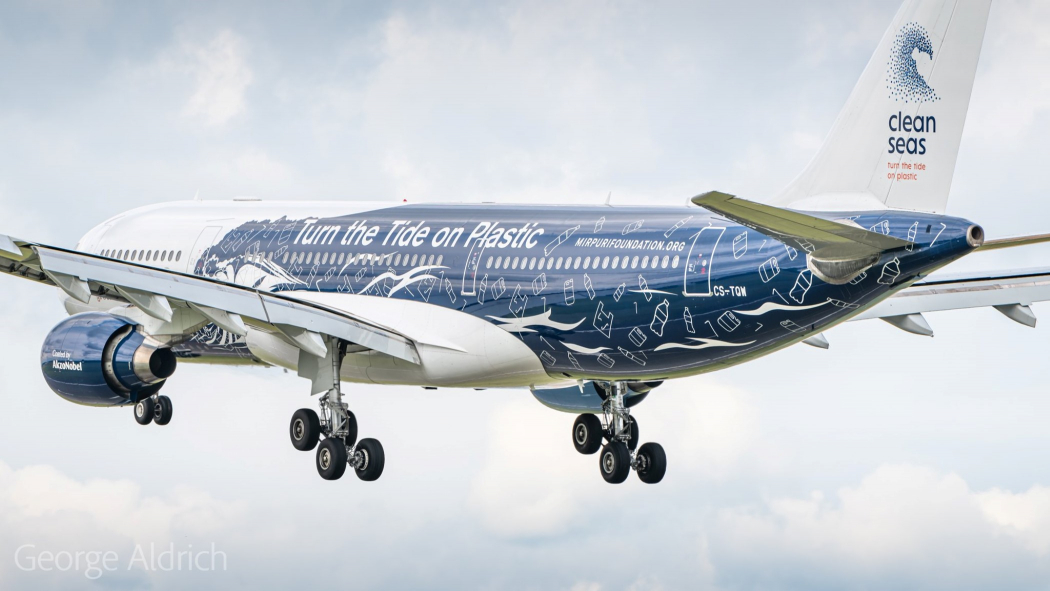 With close to 20 months now proudly decorated in the livery of the campaign with the ‘Turn the Tide’ message boldly displayed on its fuselage, the aircraft has already travelled to all five continents, taken more than 600 flights and landed in over 60 destinations worldwide.

While in Africa, Tunisia, Morocco, Nigeria, Ruanda, Madagascar, Guinea, the Congo, Senegal, Kenya, and Mauritius have all welcomed Hi Fly’s themed Airbus A330, as have some of the world’s most spectacular destinations such as Reunion Island, the Dominican Republic, French Polynesia, Cuba and Jamaica.

On the American continents: the USA, Canada and Brazil, Argentina, Panama, Venezuela and Guyana have also received a visit from the plane, while in Asia, travellers in India, China, Thailand, Tajikistan, Afghanistan and Russia, may well have seen the painted jet as it carried its message on sustainability to the four corners of the earth.

The Middle Eastern nations of Jordan, Saudi Arabia and Iraq have also been visited, but the region that has seen the most of the inspiring jetliner was Australasia, where it flew between Australia and New Zealand.

The Airbus A330-200 is painted on both sides, matching the Mirpuri Foundation sponsored ‘Turn the Tide on Plastic’ racing yacht – one side in dark blue indicating ‘pollution’ and the other in light blue ‘clean seas’ image. The idea behind the initiative, was for Hi Fly and the Mirpuri Foundation to raise global awareness of the unprecedented campaign to rid our oceans of the scourge marine litter and plastic pollution.

The team supported the United Nations ‘Clean Seas’ campaign, and highlights the extraordinary fact that unless action is taken, there will be more plastic items than fish in the world’s oceans by 2050.

The liveried plane was just one of many initiatives undertaken by Hi Fly and the Mirpuri Foundation in order to raise awareness of sustainability issues. Hi Fly has announced its plan to be the first airline to be completely ‘single-use plastic-free’ by the end of this year. As well as the ‘Turn the Tide on Plastic’ A330 the company painted its Airbus A380 in a coral themed livery to highlight the critical state of the world’s coral reefs. This way, Hi Fly aims to involve and inspire the industry to become more environmentally conscious by protecting the health of our oceans and the planet as a whole.