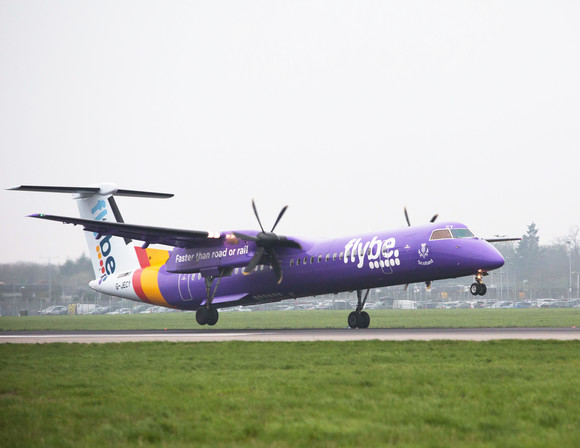 Flybe staff in Exeter have been placed under consultation over the future of job roles as the firm scales back flights at Exeter Airport.

It was confirmed earlier this week that the regional airline will scrap all of its 118-seat Embraer 195 planes from Exeter from the start of the 2019-20 Winter programme as part of a ‘base restructuring programme’.

Cardiff, Norwich and Doncaster airports will also be affected by these jet closures, putting jobs at risk.

Flybe confirmed that no pilots of the propeller Q400 planes or cabin crew will be affected by the announcement, although the airline did not make it clear if all cabin crew at Exeter have their jobs secure.

A spokesperson said: “No Q400 Pilots or cabin crew in Exeter are affected by yesterday’s announcement and Flybe will be working with the jet pilots affected to agree how they can be redeployed within the company to best suit their professional careers.”

Exeter Airport meanwhile has reassured passengers that the summer schedule will not be affected by the changes.

A spokesman said: “We understand Flybe is in the process of consulting with a number of its employees, including its crew at multiple bases across its network, which includes Exeter.

“Flybe’s plan to restructure and reduce its jet operations across many bases is part of the company’s long-standing objective to ensure the business has a long term and successful future.

“We are working closely with Flybe to ascertain its plans moving forward and the role it will continue to have in connecting Exeter with key routes in the UK and Europe. The winter programme will be launched shortly, but in the meantime, we would reassure passengers that the summer schedule is underway and operating as normal.

“If passengers have any queries, they should contact Flybe in the first instance.”

Explaining the reasons behind the restructuring, a Flybe spokesperson said: ” We are doing our best to mitigate the impact of the current situation that has arisen due to a combination of factors including seasonality, pilots’ end of leave year, Easter holidays, base restructuring and the shortage of pilots across the industry that Flybe has highlighted over recent months.“