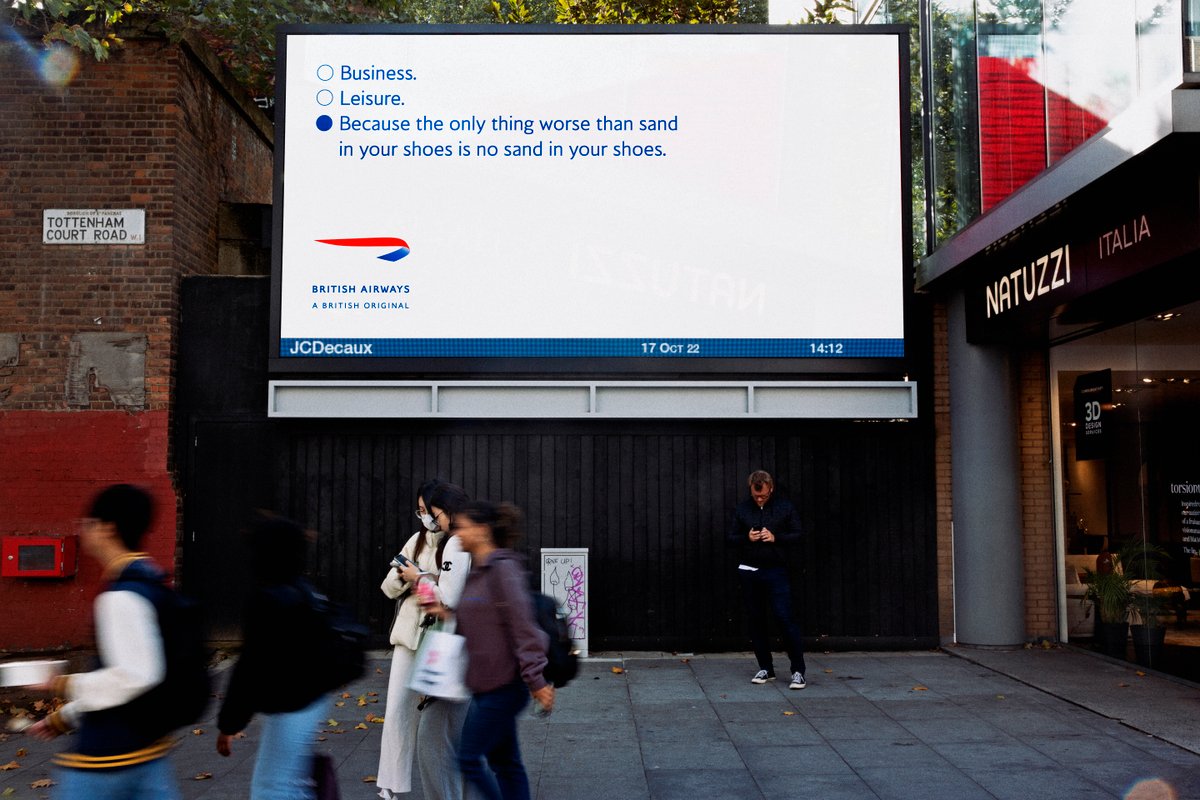 British Airways is launching its newest multi-channel advertising campaign and also its first with Uncommon Creative Studio and MG OMD.

The new positioning, ‘A British Original’, is a celebration of British Airways’ people, its customers and the nation, which has helped make British Airways, a British Original. It explores the individual and original reasons people travel, whether to reconnect with loved ones, take some time out or to immerse themselves in a different culture.

The campaign is centred around the common question travellers are frequently asked when they land in a new destination: ‘What is the purpose of your visit?’ but instead of ticking the standard boxes of ‘business’ or ‘leisure’, viewers see more meaningful and relatable answers for travel, reflecting each and every one of us. Sometimes funny, sometimes moving, but always celebrating originality in all its incredibly personal guises. Showing that British Airways recognises each of its customers as individuals.

The airline’s people are at the heart of this campaign, featuring throughout both the static imagery and the short films. One of the static shots shows a British Airways cabin crew member peering out of the window, followed by his motivation for doing what he loves, ‘the office view’. Similarly, one of these short films focuses on a British Airways’ pilot, fondly rocking his daughter to sleep before heading off to work. The film ends on Anthony’s reason for doing what he does every day, which is ‘for her’.

The campaign includes an original approach both in creative and media, bringing to life reasons for travel in a record-breaking number of executions. Encompassing over 500 unique print, digital and outdoor executions and over 32 different short films all running over the course of a month.

The print, digital and outdoor imagery embodies a stripped back approach embracing negative space, simply showing a tick box. This series will include over 500 different and uniquely written copy lines, showing viewers an original reason for travel across every media site. Some of the examples of reasons to travel include ‘because I have too much on my plate, none of it seafood’ and ‘To feed the social feed’. These will continue to adapt according to location, time of day, weather and what’s happening in the news. The copy will also sometimes relate directly to the medium with playful bus wraps and press ads adopting a battenburg approach with adjacent placements that have interacting reasons for why we travel.

MG OMD handled all planning and buying for the campaign, providing strategic insight across media executions, creating a truly original and dynamic media campaign, marking its most bespoke project to date. The campaign will appear across TV, video on demand, cinema, radio, print, display, social and out of home, including iconic sites including Piccadilly Lights and Heathrow.

The TV campaign launches in peak programming across ITV, Channel 4 and Sky, with BA top and tailing ad breaks in key primetime shows including “The Return of Friday Night Live”, “Gogglebox” and “Rob and Romesh vs”.

Hamish McVey, Head of Brands and Marketing at British Airways, said: “We really wanted this campaign to celebrate the originality of our customers and our people. Every time a customer boards a plane, they are doing so for a unique reason, and we know that those journeys are so important. We are working hard on making positive changes across our airline and this brand campaign allows us to showcase our motivation, which is our customers and our people.”

Lucy Jameson, Co-founder at Uncommon Creative Studio said: “Both Britain as a nation and British Airways as a brand have a deep history of originality. From scheduling the first commercial service to Little Simz; originality drives us forward. It’s at the core of our pioneering spirit.

We wanted to celebrate British originality at a time when we’ve never needed to rediscover it more. ‘A British Original’ champions people, not planes. We’ve started by shining a light on all the original reasons we fly – both for customers and British Airways’ people – but this is just the beginning. We hope that, going forward, each and every interaction with the brand feels as original as each and every one of the hundreds of original executions we’ve produced for the launch.”

Glenn Burchnall, Executive Director, Client Team at MG OMD said: “We are incredibly excited to be involved in such a unique and original campaign, working in partnership with British Airways and Uncommon to deliver our most dynamic and fully bespoke campaign ever; which sees us take the iconic brand of British Airways into original territories, environments and audiences, bringing the campaign to life through contextually relevant creative and cutting-edge activation.”

Anthony Oliver, British Airways 777 pilot, said: “Every day I get to play my part behind the controls of a British Airways’ aircraft, taking customers on some of the most important journeys of their lives. I hear so many incredible stories and reasons for customers travelling, so it is heart-warming to be able to celebrate them. I couldn’t be prouder to feature in this campaign alongside one of my two children and show the world my motivation, my little ones.”

The airline’s customers can also expect to see the celebration of originality throughout the customer journey, including menus focusing on British provenance. The airline is also working on a new safety video which will showcase British Airways’ people, alongside some of the most well-known and much loved British talent.