All Nippon Airways (ANA), Japan’s largest and 5-Star airline for nine consecutive years will feature the art and characters of the anime TV series “Demon Slayer” through a special limited promotion. In addition to a specially painted aircraft depicting characters from the show, domestic flights will offer Demon Slayer-themed paper cups and special paper toys for children. As part of the collaboration, planned for one year beginning from Dec. 1, 2021, episodes of the show will also be available as in-flight entertainment on domestic and international flights.

“We are excited to partner with Demon Slayer to generate excitement and share Japanese culture with a wider audience,” said Junko Yazawa, Senior Vice President, Customer Experience Management & Planning of ANA. “At ANA, we are constantly looking for ways to improve the travel experience, whether that be through the expansion of our award-winning service, the extension of our hygiene protocols or new entertainment experiences. We are confident that when our Demon Slayer-themed aircraft enter service in January 2022, they will offer a unique flight experience.”

1. Specially painted aircraft: “Demon Slayer” Jet (To be introduced from end of Jan. 2022 on domestic flights)
The special livery will be on the B767-300ER (aircraft number: JA616A) aircraft, and to commemorate this special collaboration, the design will feature the characters of the anime. In-flight services include a limited edition headrest cover and aprons for the cabin attendants, and unique in-flight announcements by the characters. While the design and aircraft type is yet to be decided, a second jet will enter service within this fiscal year. A scenic flight is also planned for the future as well. *The aircraft to feature this special design is subject to change. 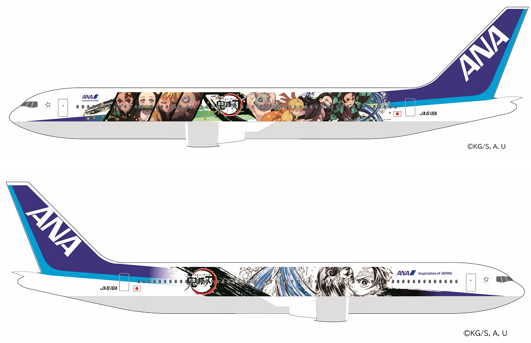 2. Specially designed in-flight paper cups and toys (available from Dec. 1, 2021)
On domestic flights (economy class only), specially designed cups and paper toys (18 varieties) for children will be rolled out.

3. Special in-flight entertainment (available from Dec. 1, 2021 on domestic and international flights)
Video program: 26 episodes of the “Demon Slayer” TV anime available.
Audio program: 5 songs from the TV anime series original soundtrack and the “Demon Slayer” orchestra concert will be availabl
*The content will vary depending on the time of the flight.

4. ANA and “Demon Slayer” special goods (campaign to open on Nov. 15, 2021) For customers traveling on ANA domestic flights
A lottery for original collaboration goods will be held for those traveling on ANA domestic flights during the target period.
The first round will be for a set of 5 badges for 1,000 customers.
Lottery registration period: November 15, 2021 – January 31, 2022
Boarding period: December 1, 2021 – January 31, 2022

About “Demon Slayer”: A TV anime series based on the manga by Koyoharu Gotouge, published by Shueisha Jump Comics, which has sold over 150 million copies in its first 23 volumes. The story, featuring a boy named Tanjiro Kamado, whose family has been killed by demons and becomes a demon slayer in order to bring his sister, who has been turned into a demon, back to human form, has gained popularity for its story, and has become a hit series not only in Japan but all over the world. From October 16, 2020, “Demon Slayer: Kimetsu no Yaiba – The Movie: Mugen Train” which is the continuation of the TV animation was released as a theatrical animation, and from December 5, 2021, the new TV animation series will be broadcast.
Official website: https://kimetsu.com/