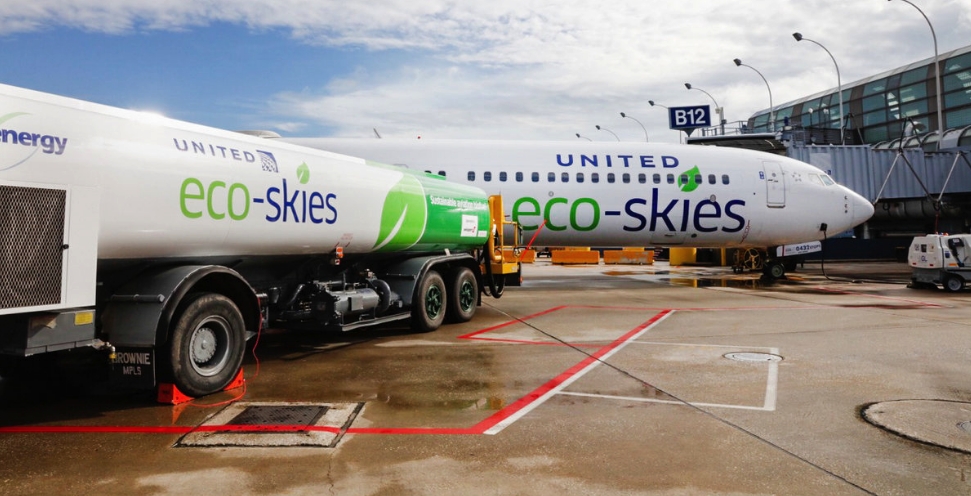 United Airlines, a longstanding leader among all global carriers in environmental sustainability, made history today – World Environment Day – with the departure of the Flight for the Planet, the most eco-friendly commercial flight of its kind in the history of aviation. On the Flight for the Planet, United became the first known airline to demonstrate all of the following key actions on a single commercial flight: utilization of sustainable aviation biofuel; zero cabin waste efforts; carbon offsetting; and operational efficiencies.

United is using the Flight for the Planet to evaluate key measures of flying as sustainably as possible using the airline’s current technology, resources and fuel-saving procedures. The flight departed from gate B12 at United’s hometown hub of Chicago O’Hare for its “eco-hub” in Los Angeles, where sustainable aviation biofuel has helped power all the airline’s flights from the Southern California hub since 2016.

“The historic Flight for the Planet showcases United’s philosophy of working together to find new and innovative ways to lead us into a more sustainable future,” said Scott Kirby, United’s president. “As an airline, we see our environment from a unique perspective every day and we know we must do our part to protect our planet and our skies.”

The Flight for the Planet further illustrates United’s commitment to its bold pledge to reduce its carbon footprint by 50% by 2050.

United is powering the Flight for the Planet using a 30/70 blend of low-carbon, sustainable aviation fuel provided by Boston-based World Energy, and traditional jet fuel. The biofuel alone achieves a greater than 60% reduction in greenhouse gas emissions on a lifecycle basis compared to traditional jet fuel, and using biofuel is one of the most effective ways an airline can reduce its impact on the environment.

In the Economy cabin, United is swapping traditional snack options with a complimentary plated service featuring fully recyclable or compostable serviceware, including a test of an industry-first, recyclable-paper, hot beverage cup.

In the premium cabin, United is continuing to use reusable service ware and swap plastic lids for beeswax food wrappers. The airline is also removing the paper wrapping from silverware roll-ups. United has already eliminated non-recyclable stirring sticks and cocktail picks on aircraft systemwide and replaced them with an environmentally-friendly product made of 100% bamboo.

United is offsetting the remainder of the flight’s emissions via the airline’s new carbon offset provider, Conservation International. Conservation International now partners with United on the airline’s consumer carbon offset program – Eco-Skies CarbonChoice – and together the two allies will focus on CI’s mission to promote nature-based solutions to climate change.

United has made significant investments in a modern, fuel-efficient fleet while implementing operational and procedural changes to drive fuel conservation. The Flight for the Planet is demonstrating single-engine taxiing, Air Traffic Control prioritization and a continuous descent approach into Los Angeles, which saves fuel while also reducing noise impact to the city. United is operating the flight using its Eco-Skies livery Boeing 737-900ER, which on average carries passengers 77 miles on a single gallon of fuel.

Additionally, 40% of United’s eligible ground service equipment (GSE) is electric-powered, with more than 70% of the airline’s ground operation at its Los Angeles eco-hub utilizing electric GSE equipment. United is the first airline to use new ITW 7400 electric ground power units that drastically reduce workplace noise pollution and cut carbon emissions by 90%. United is also using electric-powered ground equipment to service the Flight for the Planet at the departure and arrival gates.