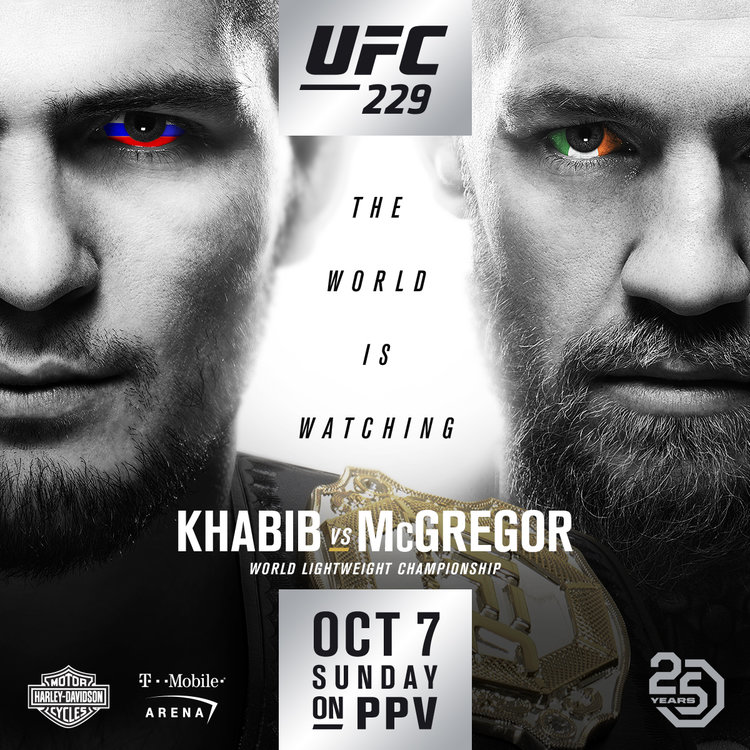 UFC® the world’s premier mixed martial arts organisation continues to push the boundaries with AirAsia as its brand partnership takes on new life via the biggest fight in MMA history, as UFC lightweight champion Khabib Nurmagomedov (26-0, fighting out of Dagestan, Russia) battles former two-division UFC champion Conor McGregor (21-3, fighting out of Dublin, Ireland) in the main event of UFC® 229: KHABIB vs. McGREGOR, presented by Harley-Davidson, on Saturday, October 6 at T-Mobile Arena in Las Vegas.

The match-up is the most anticipated in MMA history, the event will see UFC and  AirAsia deliver unprecedented branding inside the world-famous Octagon®. The famed red corner will be taken over by AirAsia creating unparalleled visibility for the airline brand on fight night.

“AirAsia is one of the most widely recognized brands throughout Asia – Pacific and they are a perfect partner to help us build positive brand awareness for UFC,” UFC President Dana White said. “This partnership is a great fit and we look forward to launching more exciting experiences for our fans.”

In the lead up to this colossal event, AirAsia’s cabin crew will join UFC’s Octagon Girls on stage during the official ceremonial weigh-ins, as one of the many highlights of a UFC fight week which sees thousands of fans in attendance and millions watching around the world.

Through this multi-facetted partnership, AirAsia will extend its brand presence on a global scale with asset integration across UFC’s social, digital, and Pay-Per-View broadcast of the event.

“We are thrilled to be part of a UFC world first,” said Tan Sri Tony Fernandes, Group Chief Executive Officer of AirAsia. “AirAsia and UFC share the same values and vision, and we see the weigh-in and Octagon takeover as a perfect opportunity to leverage this affinity and connect with MMA fans around the world. We look forward to having amazing athletes fight out of the AirAsia red corner.”

Beyond UFC 229, AirAsia will continue to activate across UFC properties including the organisation’s inaugural event in Beijing later this year, when UFC returns to China for UFC® FIGHT NIGHT: BLAYDES vs. NGANNOU 2, presented by General Tire. To further cement its status as the first Official Airline partner of UFC, the AirAsia Airbus 330-300 decorated with UFC branded livery will fly to Beijing during fight week.

Earlier this year, AirAsia announced its support to develop the next generation of MMA athletes in Asia, by sponsoring Indonesia’s One Pride strawweight champion, Linda Darrow, as the inaugural recipient of the first UFC Training Scholarship, for a month-long program at the UFC Performance Institute®, the world’s first mixed martial arts multi-disciplinary research, innovation and performance center.

UFC’s commitment to the Asia-Pacific region is driving exponential brand growth with increases seen in fandom, live events and athletes as the organization continues its investment across the MMA ecosystem. Fans across Asia can tune in to watch UFC® 229: KHABIB vs. McGREGOR, presented by Harley-Davidson, on Sunday, October 7, please check local TV listings for more information.

UFC® is a premium global sports brand and the largest Pay-Per-View event provider in the world. Celebrating its 25th Anniversary in 2018, UFC boasts more than 284 million fans worldwide and has produced over 440 events in 22 countries since its inception in 1993. Acquired in 2016 by global sports, entertainment and fashion leader Endeavor (formerly WME | IMG), together with strategic partners Silver Lake Partners and KKR, UFC is headquartered in Las Vegas with a network of employees around the world. UFC produces more than 40 live events annually that consistently sell out some of the most prestigious arenas around the globe, while programming is broadcast in over 160 countries and territories to 1.1 billion TV households worldwide in 40 different languages. UFC FIGHT PASS®, a digital subscription service, delivers exclusive live events, thousands of fights on-demand and original content to fans around the world. For more information, visit UFC.com and follow UFC at Facebook.com/UFC, Twitter, Snapchat and Instagram: @UFC.