The Auxiliary Air Transport Services, or Ground Handling, responsible for 42 thousand direct jobs and fundamental for the sustainable development of the sector, will be one of the themes presented in IBAS – International Brazil Air Show 2019.

Aviation growth requires that the supply chain also prepare for this challenge by investing in specialized equipment and manpower to meet growing demand, with emphasis on quality and competitive pricing. In this sense, ground handling companies play a fundamental role in the sustainable development of the sector, currently serving 40% of flights in Brazil, according to the Brazilian Association of Auxiliary Air Transport Services Companies (ABESATA). 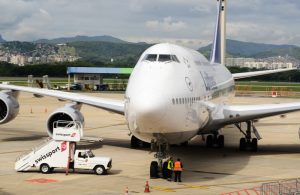 The worldwide average for the activities of Esatas companies, according to ABESATA, is 50%, demonstrating that the country is on track to reach the brand. Compared with May 2016 and December 20, 18, there is a 30% increase in the segment. Brazil has 120 Esatas companies that, together, are responsible for generating more than 42 thousand direct jobs. Services such as luggage handling, aircraft cleaning, safety inspections, X-ray, check-in, fueling, transportation and crew support, among other activities, are part of the activities of ground handling companies.

According to the president of ABESATA, Ricardo Aparecido Miguel, the expansion of the Air Transport Auxiliary Services Companies (ESATAs) in recent years has been very significant. So much so that it attracted the world’s leading players in the sector and today we have companies in the country with Arab, French, American and Chinese capital.

“The privatization of the airports has boosted the sector, since ground services can be carried out by airlines (internalized), airport operators (x-ray, baggage inspection and others) or Esatas. With the investments made in some airports, the demand for auxiliary services also increased, and the new administrators quickly saw the advantages in contracting Esatas. In some large airports in Brazil, almost 100% of the auxiliary services are provided by Esatas”, he said.

Miguel also points out that, in recent years, the ground handling segment has gained space and has become part of the main committees and groups responsible for Brazilian aviation. At the same time, it approached airport concessionaires, after the privatization process, and adopted as a practice the so-called Collaborative Decision Making, a world-renowned concept that provides for airport decisions to be made taking into account all parties involved in the operation-airport, airlines and handling. “We are seeing Brazil approach international standards and delegate services to specialized companies only. The gain of scale of an Esata, when serving more than one airline with the same equipment and the same equipment, is huge, represents cost reduction fundamental to the aviation industry”, concludes ABESATA president.

Gru Airport’s director of airport operations, Commander Miguel Dau, ground handling companies are one of the most important variables in the efficiency of airport operations, reflecting the speed of all GRU Airport practices. “The airlines’ investments in efficiency, for example, would not do any good if the ancillary services did not work as they should. Currently, GRU Airport has 40 companies in this sector and we require a minimum standard of training and infrastructure to operate, resulting increasingly in the improvement of services”, he said.

During IBAS – International Brazil Air Show 2019, will be presented as ground handling companies can contribute to the growth of aviation in Brazil.