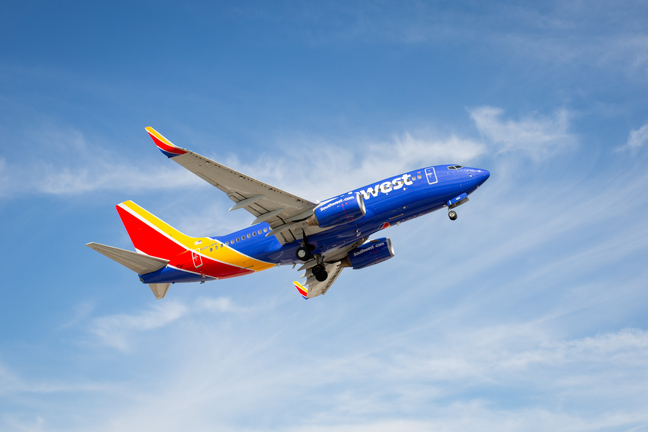 Southwest Airlines Co. is excited to announce it has joined the Vision 2045 campaign, a collaboration among multiple organizations and companies to share films and resources that aim to inspire businesses and people to take action toward a more sustainable future.

“Southwest® is honored to be part of the Vision 2045 campaign showcasing how the Company is making sustainability a priority through a series of near-term actions and long-term goals, while being the airline with Heart,” said Stacy Malphurs, Vice President of Supply Chain Management and Environmental Sustainability for Southwest Airlines. “We’re thrilled to join other organizations from across the globe that are telling their stories and highlighting the collective effort through this innovative campaign.”

Sustainability is a priority for Southwest, and the Vision 2045 campaign highlights the Company’s initiatives to address its environmental impact. This includes a 10-year plan to maintain carbon neutral growth to 2019 levels while continuing to grow its operations, and a long-term goal to achieve carbon neutrality by 2050.

Southwest is one of the most honored airlines in the world and strives to maintain a steadfast focus on a triple bottom line: People, Performance, and Planet. Learn about Southwest’s citizenship efforts and how the carrier gives back to communities across the world by visiting Southwestonereport.com.

ABOUT SOUTHWEST AIRLINES CO.
Southwest Airlines Co. operates one of the world’s most admired and awarded airlines, offering its one-of-a-kind value and Hospitality at 121 airports across 11 countries. Celebrating its 50th Anniversary in 2021, Southwest took flight in 1971 to democratize the sky through friendly, reliable, and low-cost air travel and now carries more air travelers flying nonstop within the United States than any other airline1. Based in Dallas and famous for an Employee-first corporate Culture, Southwest maintains an unprecedented record of no involuntary furloughs or layoffs in its history. By empowering its more than 55,0002 People to deliver unparalleled Hospitality, the maverick airline cherishes a passionate loyalty among as many as 130 million Customers carried a year. That formula for success brought industry-leading prosperity and 47 consecutive years3 of profitability for Southwest Shareholders (NYSE: LUV). Southwest continues to develop tangible steps toward an environmental sustainability goal of achieving carbon neutrality by 2050, including offering an opportunity for Customers to contribute toward helping Southwest offset its carbon emissions. For more information, please visit Southwest.com/wannaoffsetcarbon. Learn more at Southwest.com/citizenship about how Southwest Airlines leverages a unique legacy and mission to serve communities around the world.