SAUDIA is the first airline in Europe, the Middle East, Africa and Asia regions to introduce a complimentary social media messaging plan onboard flights. 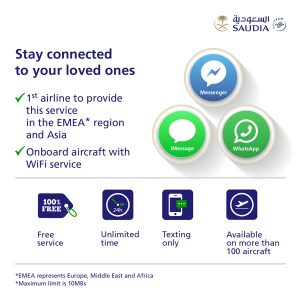 Guests travelling with SAUDIA onboard all flights enabled with WiFi connectivity, will be able to access the social messaging plan through a simple three-step process. To select the service, guests can connect their device to the “SAUDIA_ONAIR” network, and then select the plan and provide an email address in order to activate.

Once the social messaging plan is selected, it will be available for the flight duration*.

More than 100 aircraft in the airline’s fleet feature SAUDIA’s latest state-of-the-art inflight entertainment systems and features, including onboard WiFi and more than 4000 hours of Hollywood premiere and latest television shows, box sets, music, multi-language, international and children’s programming, as well as digital and audio books, and much more.

SAUDIA flies to more than 90 destinations worldwide, with a modern fleet of 155 narrow and widebody Airbus and Boeing aircraft. The airline’s growing route network and double-digit growth has resulted in highest-ever passenger numbers – flying more than 20 million guests from the beginning of the year until end of July this year.