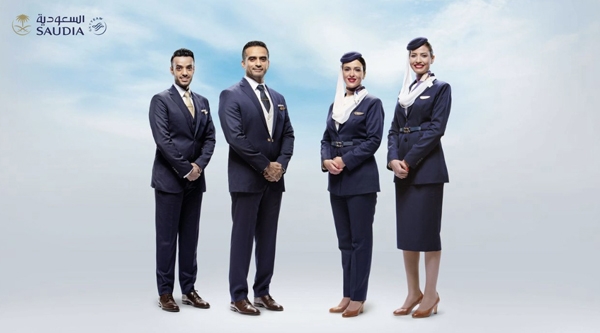 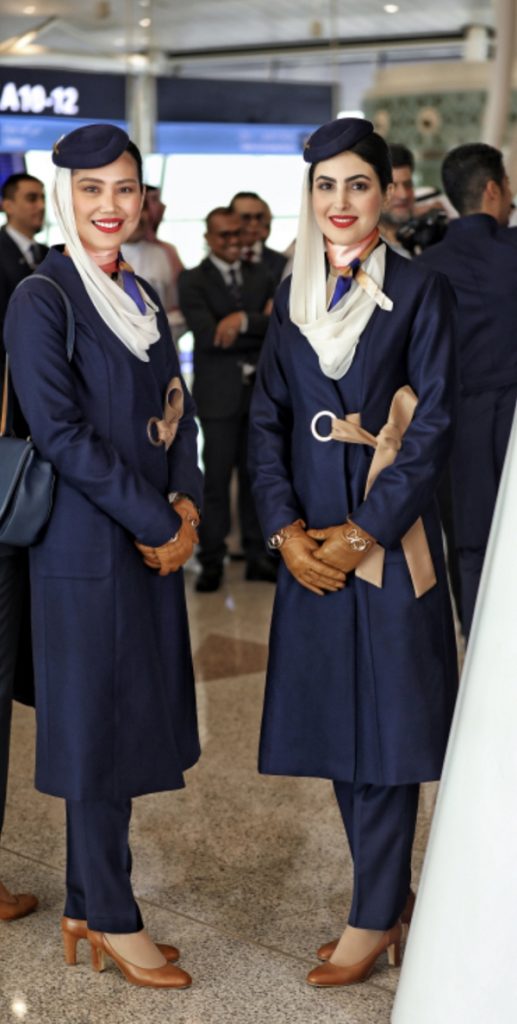 Saudi Arabian Airlines (SAUDIA) the national flag carrier of the Kingdom of Saudi Arabia, announces the rollout of its new cabin crew uniforms, featuring a refined, new take on the attire designed for all members of the hospitality team onboard.

SAUDIA began the preview of the new uniform on the airline’s Paris Charles de Gaulle and London Heathrow routes, with plans to add the rest of the airline’s route network before mid-next year.

The unfolding of the new cabin crew overall look and image comes as part of the cabin enhancements and hospitality additions; it is a reflection of the airline’s global expansion in  recent years. Guests have been warmly receptive to the recent changes and the cosmopolitan, hospitable nature of the onboard service.

The new uniforms feature a color palette that includes shades and hues of purple, beige, gold and royal blue. Arabesque designs and accents feature all throughout defined touches, from the pins to the ladies’ scarf, fabrics, signature blazers and more.

Inspiration from the nation’s culture and landscapes influenced the new designs, encompassing the heritage, colors and identity of Saudi Arabia.

A consortium of designers and product specialists within the airline designed the new custom SAUDIA cabin crew apparel, which took roughly 18 months from design concept phase to launch.

In the development phase of the uniform, SAUDIA incorporated input from its team members, including their perspectives on: ease of wear, material comfort, and sustainability. The valuable support and insights from the inflight services team contributed immensely to the final product, ensuring that design and practicality coincide harmoniously.

The materials used include a selection of fabrics; mixed poly-wool and elastane. Previously, SAUDIA made slight modifications to the previous uniform look in 2012 for the gentlemen, and 2014 for ladies. Now, more than six years later, a full rollout of the new uniform is taking place, giving a completely revitalized look from the name badge, to cuff links, belts, suit, hat, pin, shoes and travel bag.

Starting initially with the onboard team, the new designs will also be applicable to the ground services team members at airports within the Kingdom and abroad.

An award-winning carrier, SAUDIA is one of the Middle East’s largest airlines, operating a fleet of more than 170 narrow and widebody aircraft.

In recent years, SAUDIA has invested significantly in its fleet, acquiring state-of-the-art new aircraft and now operates one of the three youngest fleets in the skies with an average aircraft age of less than 5 years.

The airline route network includes 95 destinations across four continents to all 28 domestic airports in the Kingdom of Saudi Arabia, and carries more than 32 million passengers annually.