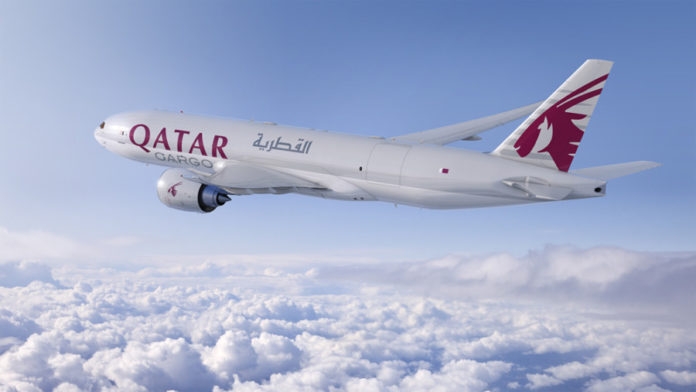 Qatar Airways Cargo has announced a significant new order for five Boeing 777 freighters in a packed press conference at the Paris Air Show in the presence of the Minister of Transport and Communications for the State of Qatar, His Excellency Mr. Jassim bin Saif Ahmed Al-Sulaiti.

The five new Boeing 777 freighters will propel the airline’s growth and give a huge boost to its capacity, enabling it to add new freighter routes while also increasing capacity on key trade lanes. The three new transpacific freighter routes are in addition to the existing and immensely successful Macau – Los Angeles service launched six months ago.

His Excellency Mr. Akbar Al Baker, said “I am pleased that Qatar Airways has today signed this landmark order for five new Boeing 777 freighters to add to our cargo fleet. It will increase our Boeing 777 freighter fleet by a full 20 percent, enabling us to further develop our business and offer new customers the chance to experience a truly first-class logistics service. This is an order that will propel our growth and, I firmly believe, confirm us as the leading cargo operator in the world.”

Qatar Airways Chief Officer Cargo, Mr. Guillaume Halleux, added: “We are very excited about these announcements. The addition of the five Boeing 777 freighters will be beneficial for our customers’ business as we can offer them greater capacity and increased frequencies on high demand routes. The three new routes add to our expanding global network operated by one of the youngest and most modern fleets in the industry. Echoing the words of His Excellency Mr. Akbar Al Baker, ‘we are a customer-centric business obsessed with perfection“.

The Boeing 777 freighter has the longest range of any twin-engined freighter and is based around the Boeing 777-200 Long Range aircraft operating on the airline’s ultra-long-haul routes. With a payload capacity of 102 metric tonnes, the Boeing 777F is capable of flying 9,070 km. The aircraft’s range capability translates into significant savings for cargo operators, fewer stops and associated landing fees, less congestion at transfer hubs, lower handling costs and shorter delivery times. The aircraft’s economics makes it an attractive addition to the airline’s fleet and will operate on long-haul routes to the Americas, Europe, the Far East, Asia and some destinations in Africa.

The carrier’s cargo volumes increased by 10 per cent in 2018 over 2017 and its products have also performed exceptionally well with positive tonnage growth and several enhancements introduced. The carrier added belly-hold cargo capacity to several key destinations in its network and also received two brand new Boeing 777 freighters in 2018. It introduced freighters to two new destinations in May 2019; Guadalajara in Mexico and Almaty in Kazakhstan.

Qatar Airways Cargo, the freight division of Qatar Airways has witnessed significant growth over the past years, faster than any of its competitors. From three Airbus 300-600 freighters in 2003, today it is one of the top cargo carriers globally with a fleet of 23 freighters and over 250 belly-hold cargo aircraft. Cargo is a very important, profitable division of the Qatar Airways Group and makes an essential and paramount contribution to the group.

A multiple award-winning airline, Qatar Airways was named ‘World’s Best Airline’ by the 2019 World Airline Awards, managed by international air transport rating organisation Skytrax. It was also named ‘Best Airline in the Middle East’, ‘World’s Best Business Class’ and ‘Best Business Class Seat’, in recognition of its ground-breaking Business Class experience, Qsuite. Qatar Airways is the only airline to have been awarded the coveted “Skytrax Airline of the Year” title, which is recognised as the pinnacle of excellence in the airline industry, five times.

Qatar Airways currently operates a modern fleet of more than 250 aircraft via its hub, Hamad International Airport (HIA) to more than 160 destinations worldwide. The airline will add a number of new destinations to its extensive route network in 2019, including Izmir, Turkey; Rabat, Morocco; Malta; Davao, Philippines; Lisbon, Portugal; Mogadishu, Somalia and Langkawi, Malaysia.