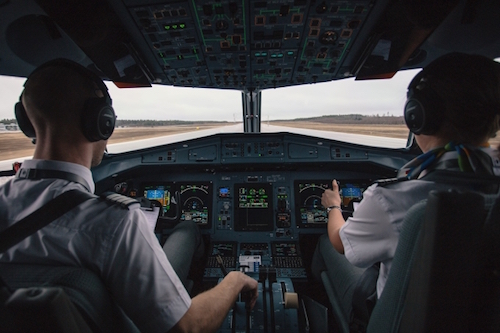 Why did the first officer on Air India IX-812 fail to take over the controls from the captain after asking for a go-around 3 times? While multiple factors led to the accident, the crew interaction and personalities definitely played their part as well. I will get back to this later.

Most of my days on the job are characterised by good crew interaction where synergy seems to flourish in the cockpit, but some days are just more of a struggle to get through.

This leads to the question: Do different personalities in the cockpit impair our performance?

• do first officers at times tailor their behaviour to meet the captain’s expectations?

• do some captains feel too challenged by the first officer’s behaviour?

• can different personalities disrupt the synergy in the crew interaction?

From the psychological point of view, there are different opinions on the matter of whether we actually can be put in specific boxes of personalities. There seems, however, to be a consensus that we all have five personality traits in common.

A personality trait is a habitual pattern of behaviour, thoughts, and emotions.

We possess all five traits, but they vary in degree from person to person. They are relatively stable throughout our lives and are valid across gender, culture etc. Based on the trait theory from psychology, these are known as The Big Five:

Conscientiousness: Organized and mindful of details, with good impulse control and goal-directed behaviour, well-prepared. People who dislike structure and schedules usually score low on this trait.

Agreeableness: Trustworthiness, altruism, kindness, affection. Those low on this trait tend to be more competitive and even manipulative.

Neuroticism: Sadness, moodiness, emotional instability. People with low scores are emotionally stable, deal well with stress, are relaxed and do not worry much

Is there such a thing as a pilot personality?

According to a NASA research based on 93 commercial pilots from 2004 the pilot personality profile is: “An emotionally stable individual who is low in anxiety, vulnerability, hostility, impulsiveness and depression. This person also tends to be very conscientious; being high in deliberation, achievement, competence and dutifulness. He also tends to be trusting and straightforward. Finally, he is an active individual with a high level of assertiveness.”

This research is a bit dated, and based on 93 pilots it may not give us the full picture. Maybe this is how we would like it to be in order to meet the common expectation of a pilot rather than how he really is.

Though I do see sense in the NASA pilot personality, I have also flown with colleagues who were competitive, had mood swings, who strived to be the center of attention, and some who never said a word beyond the checklist, and who took little interest in others. So, are we actually able to put today´s commercial pilots into a specific box of personality? I have my doubts. I think commercial pilots today come in all colours and shapes.

Are there personality traits that impair the performance in the cockpit?

There exist, in my opinion, some of the invisible human mechanisms that influence how we perform. I have met first officers telling me how they would tailor their behaviour in order to keep the captain “happy”. I have also heard from captains how some first officers can challenge them to a point, where the crew interaction would end up being more of a struggle than a flow.

Looking at personality traits, I would like to focus on extraversion versus introversion. In my opinion, here is an expectation and acceptance of a pilot being of the more extroverted type, maybe especially the pilot in the left seat. A behaviour that might be more difficult for an introvert captain to comply with. Let´s assume that you have an introverted captain, flying with a highly extroverted first officer. One might imagine that this could cause some disruption in the crew interaction and this, in turn, might lead to errors. Or perhaps that two extroverts in the cockpit could create a more competitive atmosphere, which might influence the cockpit gradient.

One might ask whether the expectation of a pilot being more of the extrovert type is a paradigm that does not represent the reality of pilot personality? Is it time also to appreciate the more introvert type in the job and in training? So, how can we use this knowledge in the cockpit?

In my opinion, personality awareness is all about knowing your strengths and your weaknesses and not being afraid to admit when you make mistakes or when you are at your limit. Secondly, being able to read the people around you might just help you avoid misunderstandings, conflicts, feeling annoyed and enhance your ability to use “all available resources” around you, creating an open atmosphere for crew interaction by including the qualities of both the extrovert and introvert types.

In the Air India IX-812 case from 2010 one of the conclusions were that the first officer failed to take over the controls after having asked for a go-around 3 times. The captain chose to continue the approach leading to a touch down 5400ft down the runway, leaving only 2800 ft left of the runway in Mangalore. After full reverse on the Boeing 737, he tried to initiate a go-around, but the aircraft continued off the runway leading them to crash into the surrounding terrain.

During the investigation, the colleagues of the captain and first officer were asked to describe their characters. The captain was known as friendly and helpful, but also as an assertive type who always wanted to be right. The first officer was known to be meticulous in his adherence to procedures. A man of few words. This could suggest that the captain was of the more extroverted type, and the first officer of the more introverted type. This might have led to personality discrepancies being a part of the error chain.

One of the conclusions were: “Many aspects of how these two pilots communicated to perform routine tasks, suggested that the pilots were not working in harmony.”

I believe personalities can definitely impair the performance in the cockpit. A situation with a tense atmosphere can cause uncertainty in both pilots. Situations may range from a “bad” landing, caused by the “pilot flying” over-focusing on making a good impression, to multiple errors caused by resources being tied up in the atmosphere rather than on the task at hand. Addressing personalities is, in my opinion, a vital part of CRM training but maybe even more so in simulator training sessions, where it quite often becomes more obvious because pilots are under pressure. Very often people are not really aware of how their personality affects others around them.

Harvard psychologist Amy Cuddy states that people size you up in seconds when they first meet you by judging two criteria:

– Can I trust this person?

– Can I respect this person?

This might be worth thinking about, when you meet up with your colleagues. It might also be worth asking yourself, whether the person in front of you is extrovert or introvert, as it might help you to be more open-minded and understanding towards the other person. There might be some truth in Will Rogers words when he said: “You never get a second chance of making a first impression”.

Gitte Furdal Damm is an experienced flight captain with a demonstrated history of working in the airlines/aviation industry. She is also the owner and CRM Instructor at About Human Factors, providing courses within aviation, such as Initial CRM, Recurrent CRM, Conversion Courses, Commander Upgrade, Teaching and Learning and individual coaching to pilots.