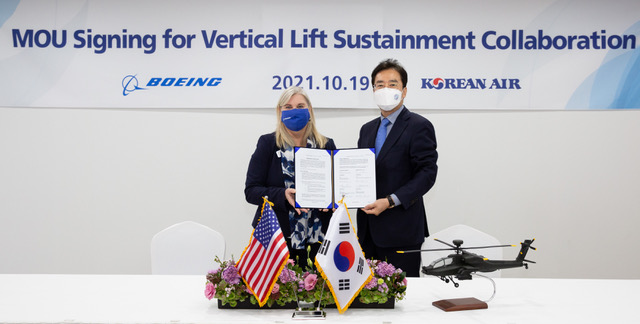 Korean Air has signed a memorandum of understanding (MOU) with Boeing regarding a technical cooperation to enhance maintenance capabilities for the Republic of Korea military’s vertical lift aircraft.

Through the agreement, Korean Air and Boeing will cooperate in the maintenance, repair & overhaul (MRO) business with the main goal of upgrading domestic maintenance capabilities of rotary-wing aircraft, especially of the Apache Guardian and Chinook helicopters. 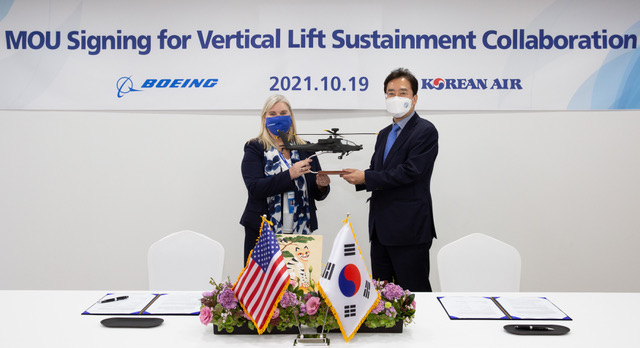 Maria Lane, Vice President of International Sales at Boeing, also emphasized, “Considering today’s security environment, not only is the introduction of the aircraft important, but also, stable management and efficient operation technologies are critical.”

On top of providing support for Apache and Chinook helicopters, the two companies plan to jointly participate in the Korean rotary wing aircraft project, as well as actively expand its cooperation in other technical fields for the Korean military and overseas markets.

About Korean Air
Korean Air, established in 1969, is one of the world’s top 20 airlines and carried more than 27 million passengers in 2019, pre-COVID. The airline serves 120 cities in 43 countries on five continents; it has a modern fleet of 156 aircraft and employs over 20,000 professional employees. Its global hub is at Incheon International Airport (ICN) and its core businesses are passenger, cargo, aerospace, and aviation maintenance and repair.

the SkyTeam airline alliance – 19 member airlines working together across an extensive global network to welcome 676 million customers each year on more than 15,445 daily flights to 1,036 destinations in 170 countries (pre-COVID.)