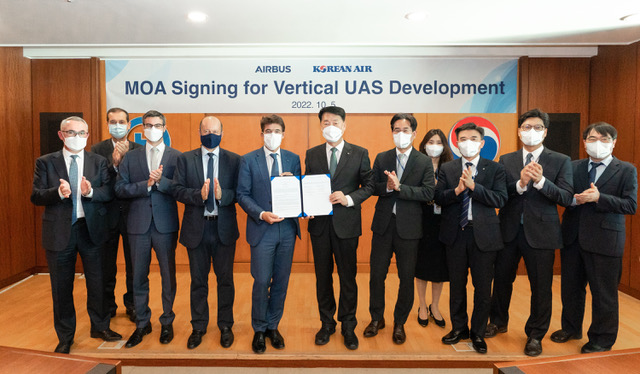 As highlighted in the MOA, Korean Air and Airbus Helicopters will develop unmanned aerial systems (UAS) for the ROK Navy: a ship-borne reconnaissance UAS and a UAS to surveil Korea’s northwest islands. Korean Air will combine its experience and know-how in UAS development with Airbus Helicopters’ expertise in UAS design and manufacturing, and knowledge gained from their inhouse VSR700 UAS program.

Korean Air is leading the Korean unmanned aerial system market with its 20 years of experience and expertise. Through this partnership, Korean Air plans to strengthen its position in the global VUAS market.

In June, Korean Air established a next-generation stealth drone R&D center, and in August, the company was also selected as the preferred bidder for the Korean Agency for Defense Development’s (ADD) “stealth UAV squadron development.”

About Korean Air
Serving the world for more than 50 years, Korean Air is one of the world’s top 20 airlines, carrying more than 27 million passengers in 2019, pre-COVID. With its global hub at Incheon International Airport (ICN), the airline serves 120 cities in 43 countries on five continents with a modern fleet of 155 aircraft and over 20,000 professional employees.

The airline’s outstanding performance and commitment to the highest level of safety and customer service was further highlighted during the pandemic, granted numerous awards including 2021 Airline of the Year and 2022 Cargo Operator of the Year by Air Transport World, and a 5-star COVID safety rating from Skytrax. Korean Air is a founding member of the SkyTeam airline alliance, and has grown into one of the largest transpacific airlines through its joint venture with Delta Air Lines. Dedicated to providing Excellence in Flight, Korean Air’s vision is to be a respected leader in the world airline community.