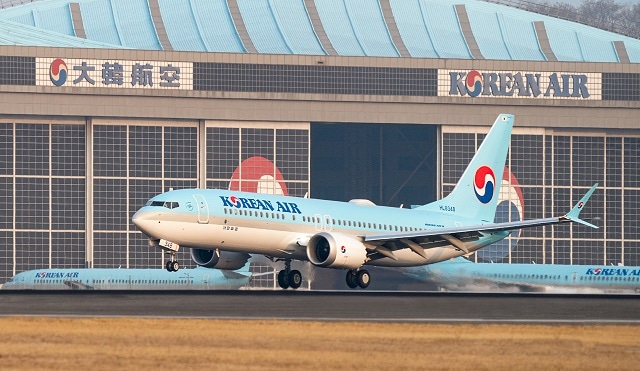 Korean Air announced that its first Boeing 737-8 was delivered to Incheon Airport on February 13. The newly introduced Boeing 737-8 is scheduled to begin operations from March 1 after undergoing standard safety procedures such as an airworthiness test.

Kicking off with its first delivery of the 737-8, Korean Air is slated to receive a total of six aircraft this year. In November 2015, Korean Air signed an agreement to acquire 30 737-8s.

The 737-8 is a next-gen, eco-friendly aircraft with superior efficiency, reliability and operational capabilities. Powered by the latest CFM International LEAP-1B high-tech engines, the fleet also features the split-scimitar winglets that reduce aerodynamic drag and decrease necessary fuel amounts by 1.8%. These new advanced technology winglets are manufactured by Korean Air’s Aerospace Division and supplied to Boeing.

The aircraft can operate on 15% less fuel compared to similar aircraft, lowering per-seat operating costs by 12%. Carbon emissions will also be reduced by 13% compared to the Boeing 737 Next Generation.

The cabin is equipped with the Boeing Sky Interior, which offers customers a roomy and comfortable space with its streamlined ceiling and overhead bins. The LED lighting system also allows for lighting to be adjusted to match phases of the flight for better ambience.

Korean Air offers a total of 146 seats, including 8 in Prestige class and 138 in economy class on its new model.

Since 2019, the 737-8 has obtained airworthiness from 188 countries, after its various safety devices and software systems were strengthened through thorough inspection and upgrades. A total of 36 airlines around the world, including American, United and Singapore, operate the 737-8.

The 737-8 has demonstrated high operational reliability, with a 99.38% on-time performance over the 898,737 flight hours logged so far.

“The 737-8 will enable Korean Air’s continued growth through improved efficiency and operational cost performance,” said Ihssane Mounir, senior vice president of Commercial Sales and Marketing. “This milestone delivery will further enhance Korean Air’s domestic and regional capabilities and we are dedicated to supporting the airline as they integrate these new airplanes into their world-class fleet.”

Korean Air highlighted that its crew are fully trained and prepared to operate the 737-8. “We have sent our mechanics to other overseas airlines that already operate the aircraft and adapted our own maintenance manual for training so that our team can perform standardized maintenance under any circumstances. We have also updated the flight operation manuals to prepare against all possible situations during flight, and have conducted pilot training for these situations using our own 737-8 simulators.”

The Ministry of Land, Infrastructure and Transport (MOLIT) plans to carry out special management for the safe operation of 737-8 aircraft by providing full support to Korean Air and other airlines operating the 737-8 in the future such as through participating in simulator training, reviewing observations and engaging in test flights.