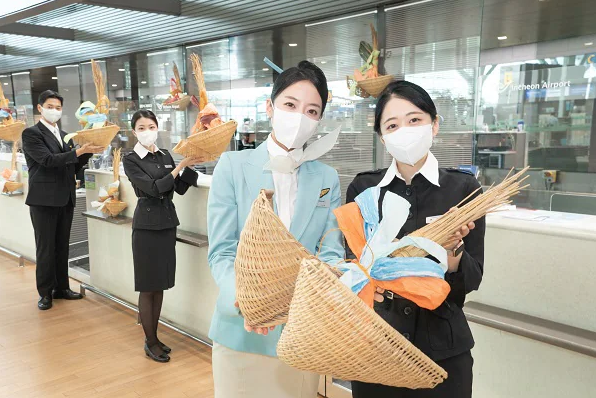 To celebrate the Lunar New Year, Korean Air will display Bokjori, a decoration of good fortune, at various company sites from January 25 to February 7.
Bokjori is a bamboo strainer shaped like a dipper. Hanging up Bokjori to welcome the Lunar New Year is a Korean tradition. The strainer is believed to filter bad luck and only leave good luck.

Korean Air displays Bokjoris every Lunar New Year at various locations, including domestic airport check-in counters and lounges, to both wish customers good health and blessings, and preserve this Korean traditional custom.
Korean Air will continue to promote diverse aspects of Korean culture both at home and abroad.

About Korean Air
On March 1, 1969, Korean Air started off as a small airline in Asia, with only eight planes. Since then, we have striven to develop new markets and improve customer service through continuous changes and investments.

“To be a respected leader in the world airline community.” This is the vision we announced in 2004 to celebrate Korean Air’s 35th anniversary. Under the slogan, “Excellence in Flight,” we have been endeavoring to provide our customers with safer and more distinguished services than any other airline in the world.

In 2019, Korean Air celebrated its 50th anniversary. With the love of our customers and trust of our nation, Korean Air has soared to greater heights as a leading global airline. We will never forget that our roots lie in the support and trust shown by our customers, who have been calling us the “Wings of the People” over the past half a century.

Korean Air is taking the next step and flying towards another 100 years. We will be reborn as the “Wings of the World” and contribute to creating a better society for all.

Under the core values of “safety” and “customer satisfaction,” we will continue dedicating the utmost effort to establishing Korean Air, an airline everyone wants to fly with, as a respected leader in the global aviation industry.