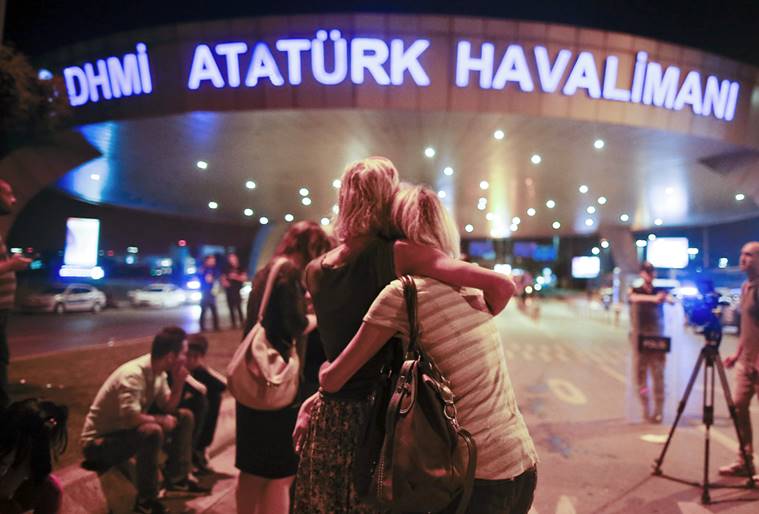 A gun and bomb attack on Istanbul’s Ataturk international airport has killed 36 people and injured more than 140 others, officials say.

Three attackers began shooting outside and inside the terminal late on Tuesday and blew themselves up after police fired at them, officials say.

Recent bombings have been linked to either IS or Kurdish separatists.

Ataturk airport has long been seen as a vulnerable target, our Turkey correspondent adds, reporting from a plane stuck on the tarmac in Istanbul.

There are X-ray scanners at the entrance to the terminal but security checks for cars are limited.

Pictures from the airport terminal showed bodies covered in sheets, with glass and abandoned luggage littering the building.

Turkish President Recep Tayyip Erdogan said the attack should serve as a turning point in the global fight against militant groups.

“The bombs that exploded in Istanbul today could have gone off at any airport in any city around the world,” he said.

The US called the attack “heinous”, saying America remained “steadfast in our support for Turkey”.

Speaking several hours after Tuesday’s attack, Mr Yildirim said at least 36 people were killed and many wounded, some seriously, with foreigners likely to be among the victims.

He said the attackers had arrived at the airport in a taxi.

Footage on social media shows one of the attackers running in the departure hall as people around him flee. He is shot by police and remains on the ground for about 20 seconds before blowing himself up. All three attackers were killed.

Justice Minister Bekir Bozdag put the number of injured at 147.

Taxis were used to rush casualties to hospital after the attack. Desperate relatives of those missing later gathered outside a local hospital where many victims were taken. Some expressed anger about the lack of information.

Flights in and out of the airport were suspended after the attack. The US Federal Aviation Administration initially grounded all services between the US and Istanbul but the stoppage was later lifted.

Flights have now resumed at the airport, but information boards showed about one-third had been cancelled, with many delays.

Paul Roos, who was due to fly home to South Africa, told Reuters he saw one of the attackers.

“He was wearing all black. His face was not masked. We ducked behind a counter but I stood up and watched him. Two explosions went off shortly after one another. By that time he had stopped shooting.

“He turned around and started coming towards us. He was holding his gun inside his jacket. He looked around anxiously to see if anyone was going to stop him and then went down the escalator. We heard some more gunfire and then another explosion, and then it was over.”

Charles Michel, the Prime Minister of Belgium whose capital city was targeted by bombers in March, tweeted from the EU summit in Brussels: “Our thoughts are with the victims of the attacks at Istanbul’s airport. We condemn these atrocious acts of violence.”

In December, a blast on the tarmac at a different Istanbul airport, Sabiha Gokcen, killed a cleaner. That attack was claimed by a Kurdish group, the Kurdistan Freedom Falcons (TAK).

More than 61 million passengers travelled through Ataturk airport in 2015.

However, security concerns and a Russian boycott over last year’s downing of a Russian military jet on the Turkey-Syria border have hit the Turkish tourist sector this year.

A US state department travel warning for Turkey, originally published in March and updated on Monday, urges US citizens to “exercise heightened vigilance and caution when visiting public access areas, especially those heavily frequented by tourists.”