Low-fare carrier, Frontier Airlines, introduced the newest aircraft tail to its fleet on 31st October, Wellington the Black-Footed Ferret. The addition of the Airbus A320neo aircraft, Wellington, grows Frontier’s fleet to 95 Airbus aircraft. The tail’s namesake calls attention to the town in Larimer County, Colorado and the local recovery efforts for one of the most endangered species in North America.

“We’re excited to welcome Wellington the Black-Footed Ferret to our fleet,” Barry Biffle, President and CEO of Frontier Airlines said. “The animals on the tails of our aircraft are part of Frontier’s DNA and Wellington is a special addition to the fleet because of its connection to Colorado and its endangerment. As America’s Greenest Airline, we feel a great responsibility to support the efforts of the National Black-Footed Ferret Conservation Center and we look forward to continuing our partnership with them.”

“It’s incredible to see how far we’ve come together on our journey to bring this species back from the brink of extinction,” said Noreen Walsh, Regional Director for the U.S. Fish and Wildlife Service. “This success is due in large part to the strength of our partnerships with states, local communities, tribes, ranching families, and now, Frontier Airlines.”

“On behalf of the town of Wellington I would like to say thank you to Frontier Airlines for choosing Wellington the Black-Footed Ferret as the animal on the tail of its newest aircraft”, Mayor of Wellington, Troy Hamman said. “It’s an honor for me as the town mayor of Wellington to help represent our black-footed ferret and an awesome airline such as Frontier.” 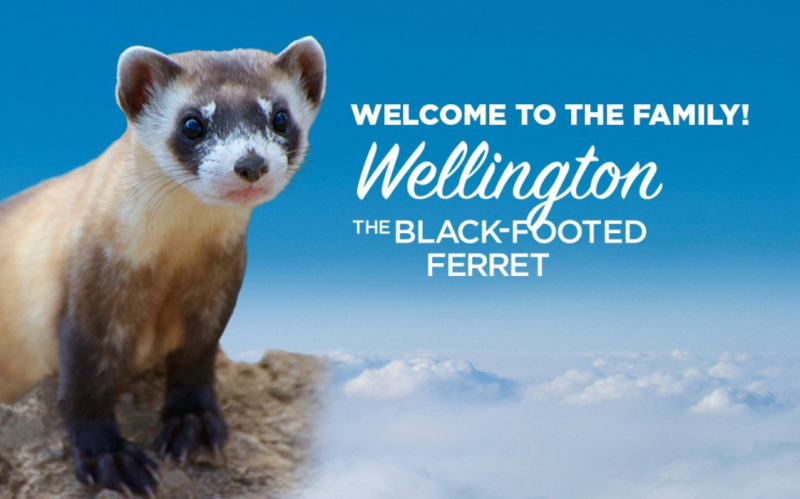 Black-footed ferrets are the only ferret native to North America. The U.S. Fish and Wildlife Service’s National Black-Footed Ferret Conservation Center, along with many partners, coordinates efforts to recover the species and monitor overall population health.

Frontier Airlines has partnered with the conservation center to support their efforts and call attention to endangered species. To learn more about the center and about black-footed ferrets, visit www.blackfootedferret.org.

Frontier operates 95 A320 family aircraft and has the largest A320neo fleet in the U.S., delivering the highest level of noise reduction and fuel-efficiency, compared to previous models. The use of these aircraft, Frontier’s seating configuration, weight-saving tactics and baggage process have all contributed to the airline’s average of 39% fuel savings compared to other U.S. airlines (fuel savings is based on Frontier Airlines 2018 fuel consumption per seat-mile compared to the weighted average of major U.S. airlines). More information about Frontier’s green commitments are available at FlyGreener.com.

With over 150 new Airbus planes on order, Frontier will continue to grow to deliver on the mission of providing affordable travel across America. Frontier’s young fleet also ensures that the company keeps fares low and that customers will enjoy a pleasant and reliable experience flying with the airline.