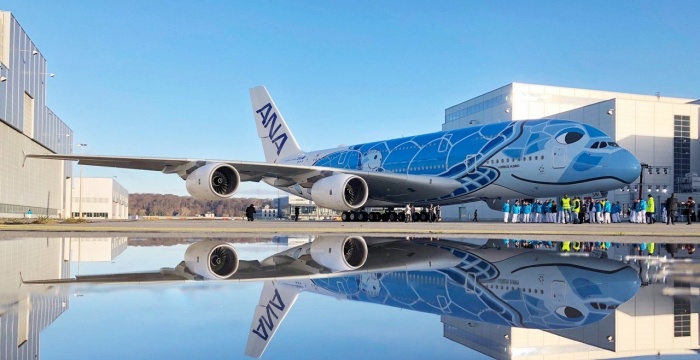 The first A380 for All Nippon Airways (ANA) has rolled out of the Airbus paint shop in Hamburg, Germany, bearing the airline’s distinctive and unique Hawaiian Green Sea Turtle livery.

ANA has firm orders for three A380s, becoming the first customer for the superjumbo in Japan. The airline will take delivery of the first A380 at the end of Q1 2019 and will operate the aircraft on the popular leisure Narita-Honolulu route.

The three ANA A380s will be painted in a special livery depicting sea turtles which are native to Hawaii. The first aircraft is blue, the second will be green and the third orange. The ANA A380 livery is one of the most elaborate ever painted by Airbus. It took 21 days for the Airbus team to paint a surface of 3,600m2 using 16 different shades of color.

The aircraft will now have completion of its cabin and enter a final phase of ground and flight tests in Hamburg, during which all cabin systems will be thoroughly tested, including air flow and air conditioning, lighting, galleys, lavatories, seats and in-flight entertainment. In parallel, Airbus will also undertake advanced aircraft performance tests before it flies back to Toulouse for preparation of its delivery and ferry flight.

As one of the world’s most prestigious airlines, ANA will be able to benefit from the A380’s proven operating economics and unrivalled passenger appeal. Offering more personal space than any other aircraft, the A380 is the most efficient solution to meeting growth on the world’s most heavily travelled routes, carrying more passengers with fewer flights at lower cost and emissions.

At the end of November, Airbus has delivered 232 A380s, with the aircraft now in service with 14 airlines worldwide.