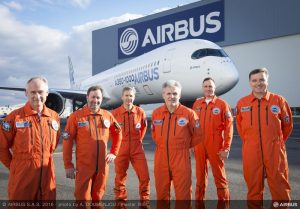 Monitoring all the test parameters at the Flight-Test-Instrumentation (FTI) station behind the cockpit are Patrick du Ché, Head of Flight & Integration Tests; Emanuele Costanzo, Head of A350 Development Flight Tests; and Stéphane Vaux, Flight-Test Engineer.

Airbus said that benefitting from the experience of the original A350-900 test campaign (accomplished in 2014), the A350-1000’s development programme will be shorter – under one year for the three aircraft. The overall campaign will culminate in the type’s certification followed by its entry into airline service scheduled for the second half of 2017.

The aircraft has a longer fuselage to accommodate 40 more passengers than the A350-900 and features a modified wing trailing-edge and new six-wheel main landing gears.

The company claimed that to date 11 customers from five continents have placed orders for a total of 195 A350-1000s.