Emirates Engineering has successfully completed the reconfiguration of the second Boeing 777-200LR aircraft in its fleet. The conversion of the aircraft from three to two cabin classes was executed fully in-house at the Emirates Engineering hangars in Dubai. The reconfigured aircraft also features new, wider Business class seats in a 2-2-2 format, a new social area in business class, as well as a fully refreshed Economy class providing customers a superior inflight experience.

Working with internal stakeholders as well as external suppliers, it only took Emirates Engineering 22 months from the time the decision was made to reconfigure the airline’s Boeing 777-200LR fleet to the first reconfigured aircraft rolling out of the hangars ready for its first commercial flight.

Emirates Engineering undertook a complex process to ensure that the job was completed successfully and on time. This included detailed work to outline specifications, review designs and layout, manage procurement and contracts with suppliers, secure regulatory approvals, maintain a stock of raw materials, and the management of workflows, timelines and resources in the run up to grounding the aircraft and converting the interiors.

Finalising the design was core to the reconfiguration process and the layout of the cabin that was finally chosen was one of eight proposed blueprints. The engineering team also had to secure approvals from regulatory authorities including the GCAA and the FAA in order to modify the aircraft from its original design.

Once the design was finalised Emirates Engineering worked with suppliers to ensure that all the necessary parts and spares were available to complete the reconfiguration of the aircraft. In total, the team had to work with over 30 suppliers and had to manage more than 2,700 parts and spares at any one point of time. Key suppliers such as Boeing, Jamco, Panasonic, Rockwell Collins, Zodiac, and ATG were present on-site to provide assistance.

The next step in the process was to ground the aircraft for cabin reconfiguration. During this time the original interiors of the aircraft cabin were completely stripped and rebuilt. The reconfiguration not only involved the installation of new seats but also a number of other changes including new wiring for the lighting systems, raising the ceiling height in the business class cabin, and modifying the aircraft galleys to incorporate the new social space in business class.

It took Emirates Engineering 55 days of ground time to reconfigure the first aircraft. However, as a result of the learnings and efficiencies achieved during the first conversion, the reconfiguration of the second aircraft was completed in just 35 days.

A battery of tests had to be conducted on the aircraft at various stages to ensure its safe operations. The four major types that had to be conducted included: prototype testing where the design was validated for regulatory compliance; functional testing of cabin components; EMI Electro-magnetic interference (EMI) and air-flow testing inside the cabin, and a five hour test flight with the simulation of various flight scenarios and in-flight fire and smoke testing.

Overall, the Emirates Engineering team invested the equivalent of over 16,000 collective man hours in the design and implementation of this aircraft reconfiguration project.

Emirates Engineering operates modern and extensive technical facilities in Dubai to maintain its fleet of over 260 aircraft. Spread over 136 acres, the support infrastructure includes seven heavy maintenance hangars and four light maintenance hangars, all of which are capable of servicing the Airbus A380, the world’s largest passenger jet. Leveraging on its experience as the world’s largest operator of the Airbus A380 and the Boeing 777 aircraft, Emirates Engineering provides Maintenance, Repair and Overhaul (MRO) services selectively to external parties.

Watch a video of how the Emirates Engineering team executed the reconfiguration. 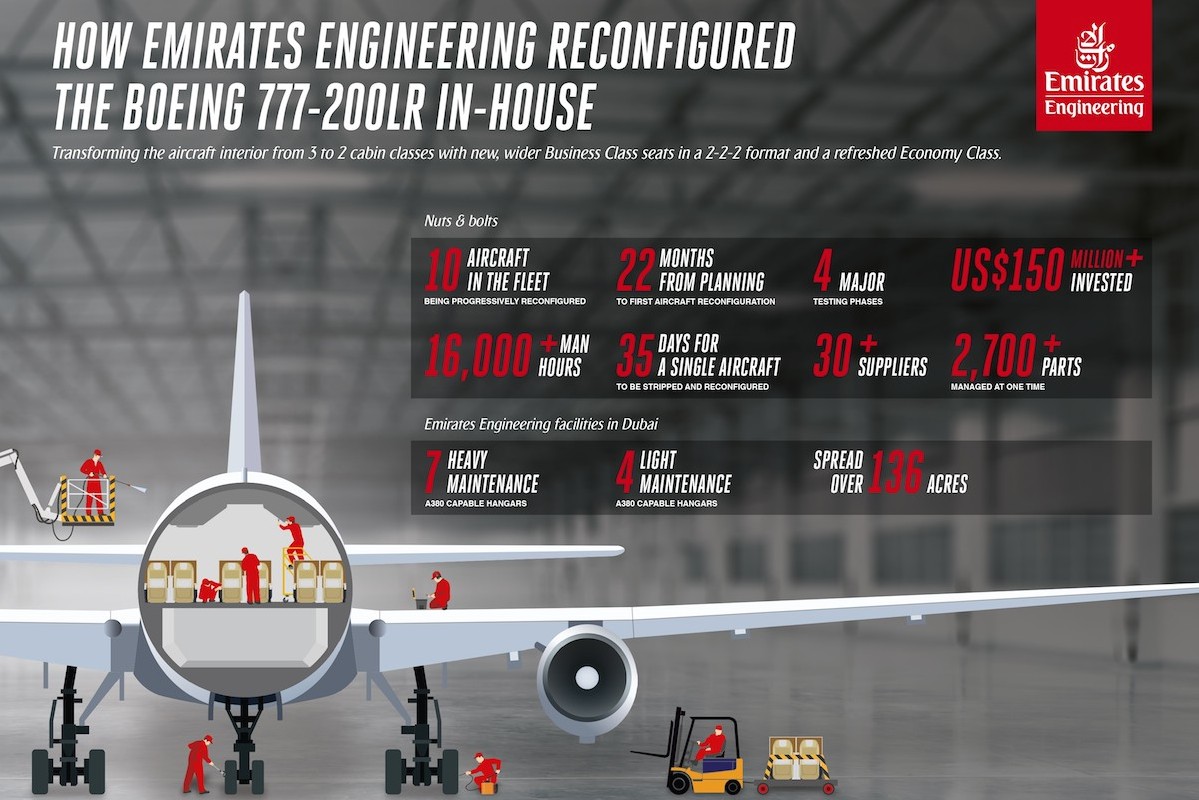 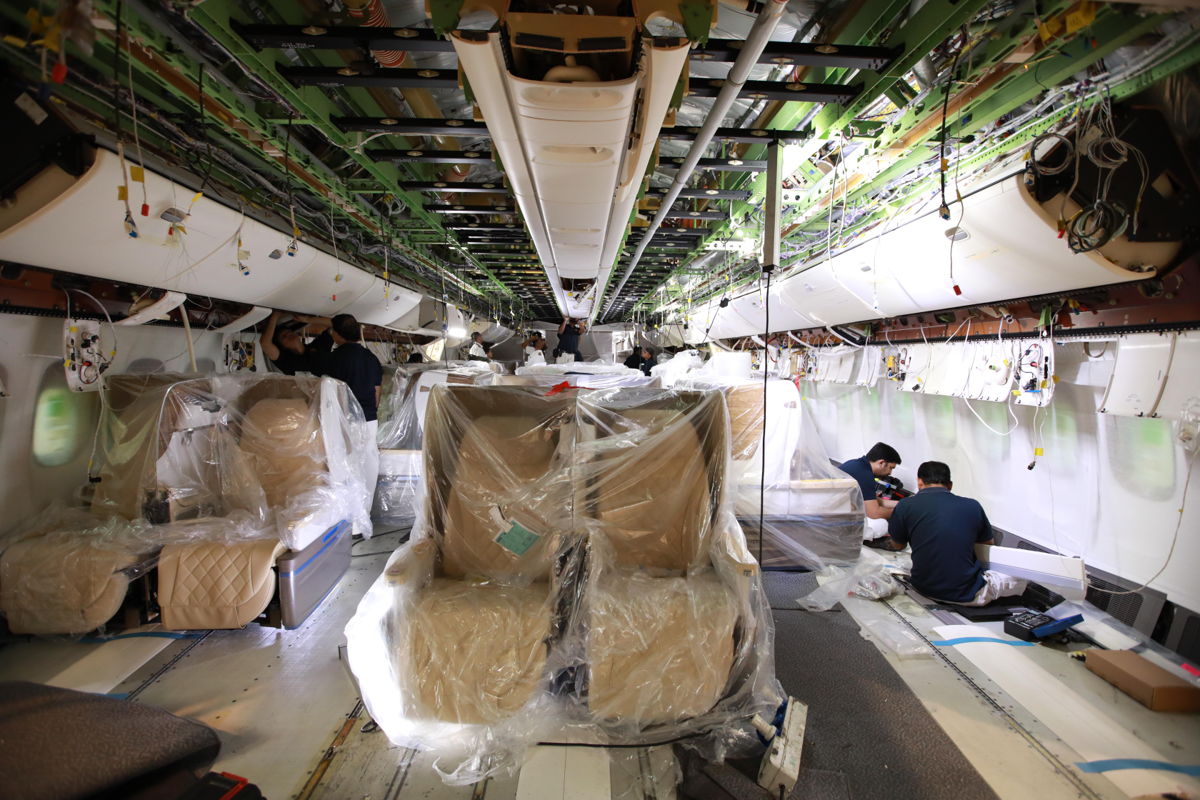 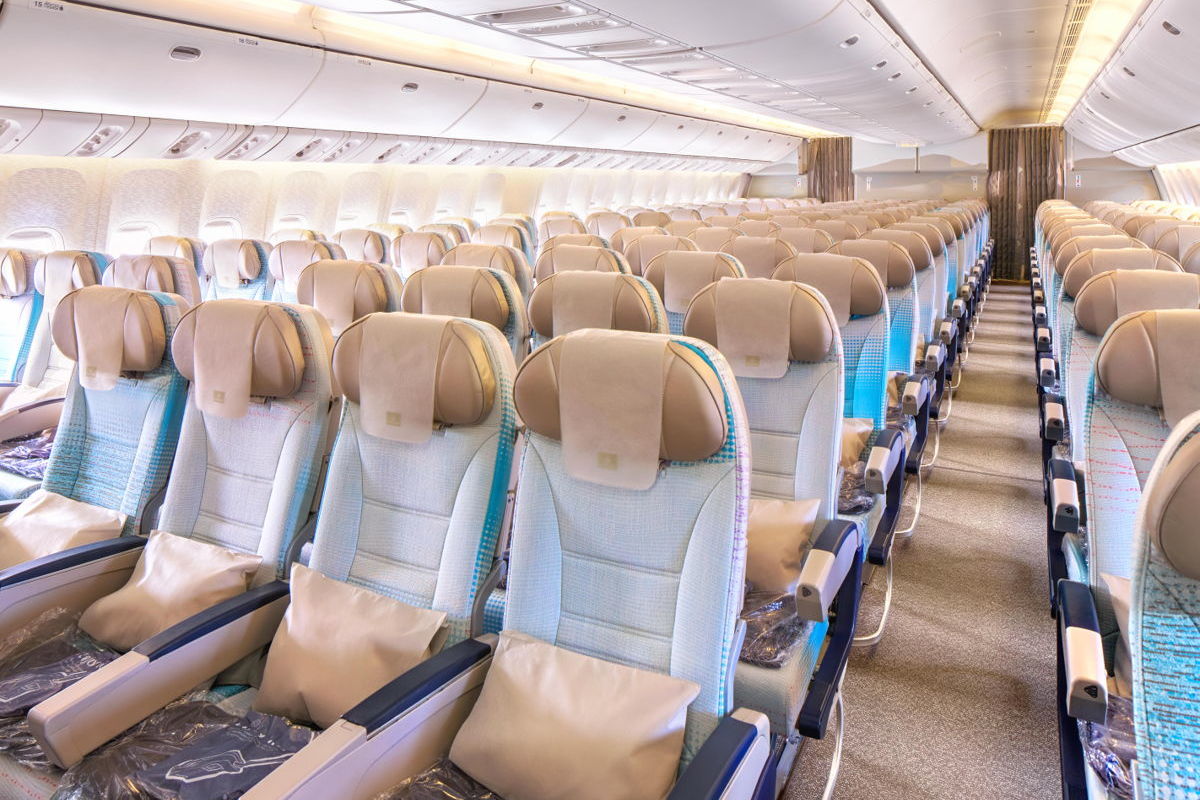