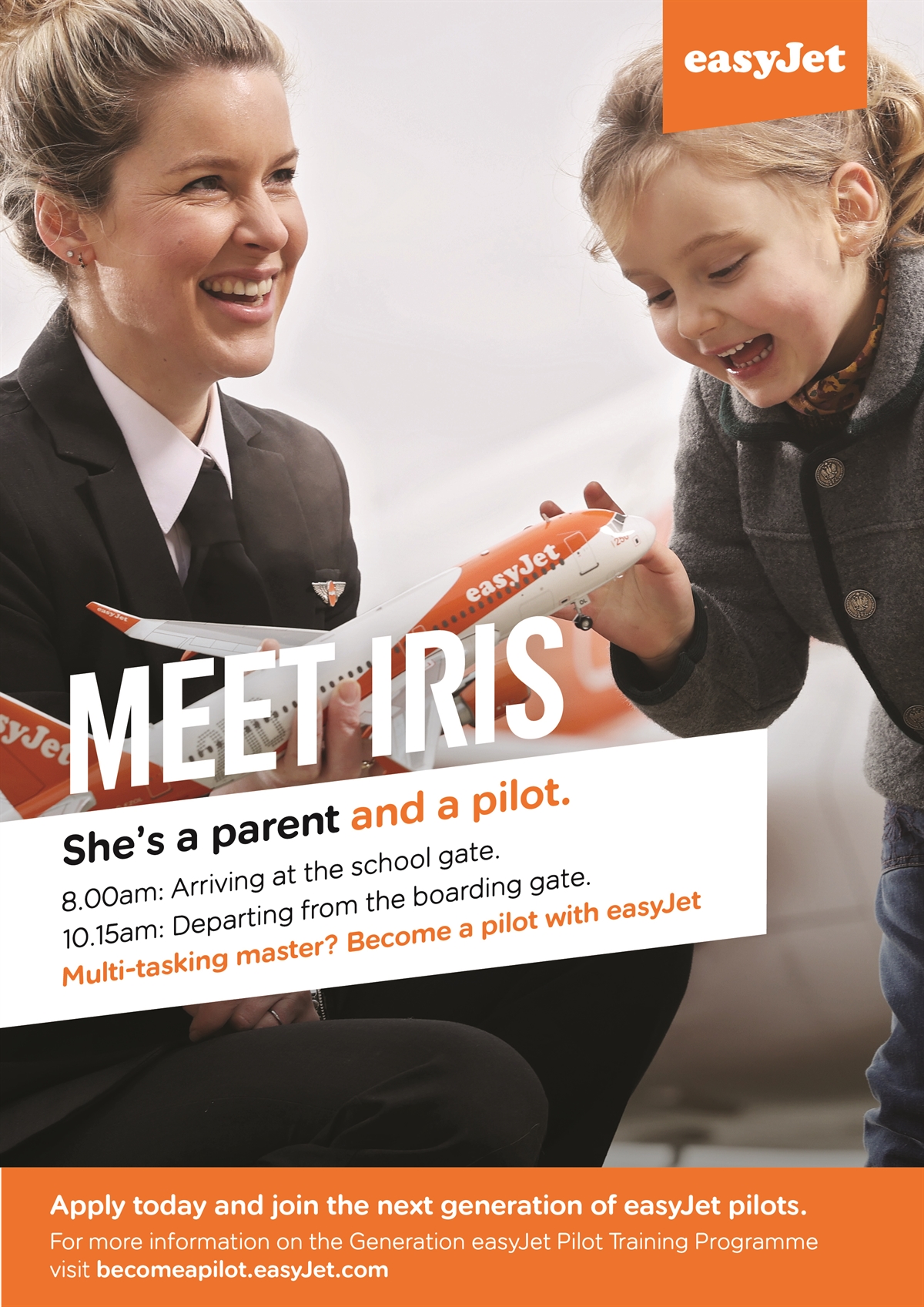 A parent, a former gymnast and DJ are the stars of a new easyJet recruitment campaign, encouraging people from all walks of life to train to become an airline pilot.

For the first time since the beginning of the pandemic, easyJet is re-opening its pilot training programme. To support future growth opportunities, the airline is recruiting over 1000 new pilots over the next five years.

The new ad campaign, featuring multi-talented, real-life easyJet pilots, aims to highlight that everyone has the potential to turn their skills and passions towards becoming an airline pilot.

Mother of two, Captain Iris de Kan, is seen in one of the ads with 5-year-old daughter Kiki. The ad serves to communicate that those with incredible multi-tasking skills could make for excellent pilots. While many parents wish they had eyes in the back of their head, it’s a common misconception that 2020 vision is required to become an airline pilot.

easyJet Senior First Officer Aaron Moseley, a former resident DJ, transitioned from the club decks to the flight deck by training to become a pilot for easyJet seven years ago. His hands-on practical skills have enabled him to switch records for runways.

The new recruitment ad campaign is part of easyJet’s efforts to find the next generation of easyJet pilots, with a continued focus on encouraging more women to become an airline pilot to address the gender imbalance in the industry.

“We are delighted to be reopening our pilot training programme again for the first time since the pandemic hit and will see us recruit over 1000 new pilots in the coming years. easyJet has long championed greater diversity in the flight deck and this series of ads aims to highlight the extraordinary breadth of skills our pilots have and show that pilots can be found in all walks of life, in a bid to attract more diverse candidates.

“We continue to focus on challenging gendered stereotypes of the career having doubled the number of female pilots flying with us in recent years. We also acknowledge that whilst we have made progress, there is still work to do. Increasing diversity in all of its forms in the flight deck is a long-term focus for easyJet and so we will continue to ensure we lead the industry on this issue.”

“It’s important that girls have visible role models so we can combat job stereotypes and show that anyone with the motivation and passion can turn their skills to being an airline pilot. I love the responsibility and challenge that comes with my job – but it’s not as challenging as juggling the demands of a five-year old and a little baby at home!”

“I’m really proud to be a black man who is also a role model for the next generation. Growing up, I never had the chance to see or know a black airline pilot. I’m proud to be able to go into schools to talk to young people and show that you can develop skills through all kinds of experiences like music and sport that they can channel into becoming a pilot, and have the opportunities to achieve their dreams too.”

“Combining my love of travel with the practical skills I learnt on the gym floor really does make being a pilot the perfect match! I love my job and would really encourage anyone who loves a challenge – and of course great views – to consider it!”

Since the launch of the airline’s Amy Johnson Initiative in 2015, easyJet has almost doubled the number of female pilots in its ranks. Like many industries, the impact of the pandemic meant that the airline had to pause bringing new recruits onboard.

But now aiming to be back to near pre-pandemic levels this summer and much sooner than industry predictions suggested, easyJet has reopened its pilot training programme to bring 1000 new pilots onboard over the next five years. This will provide an opportunity to encourage even more women to consider the career and join the airline over the coming years. Many newly qualified female pilots are also now set to join the airline in coming months, with flying set to ramp up for the summer and beyond.

The airline continues to showcase inspiring role models like Iris, Nina and Aaron in its recruitment campaigns and get young people thinking about the career through its pilot school visits programme.

Over the last five years easyJet pilots have visited over 500 schools, colleges, and youth groups. Last year, as part of its continued work under its Amy Johnson Initiative, easyJet launched virtual school visits whilst the country was in lockdown meaning that when in person visits haven’t been possible, schools could request a virtual visit from an easyJet pilot to join classrooms via video link, providing young people across the UK with the opportunity to find out what the job of a pilot is really like. Many of the airline’s female pilots have been fronting the visits, aiming to show that it truly can be a job for everyone.

To apply to the Generation easyJet Pilot Training Programme, aspiring pilots will need to be aged 18 or over by the time they begin training and have a minimum of 5 General Certificate of Secondary Education (GCSE) of Grade C or above (or equivalent), including Mathematics, Science and English language – no higher qualifications or degrees are required. The Generation easyJet Pilot Training Programme takes aspiring pilots from little to no flying experience, to operating a commercial passenger jet in around two years with its intensive, industry-leading training course.

The campaign launches from today across easyJet’s social media channels across the UK and Europe.

Aspiring pilots can find out more and apply today via becomeapilot.easyJet.com