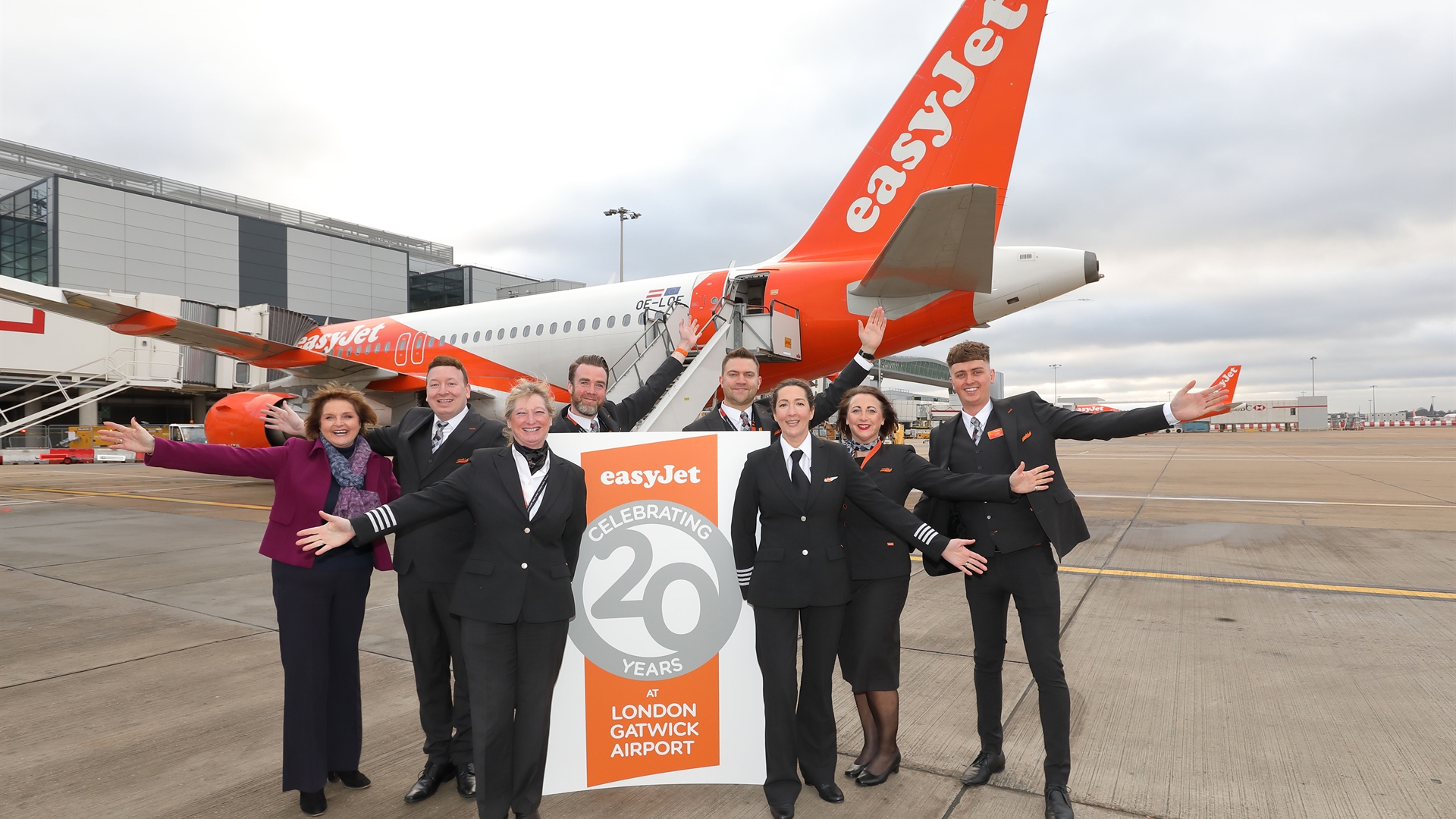 easyJet, Europe’s leading airline, is celebrating the 20-year anniversary of its base at London Gatwick airport.

The start of easyJet’s operation with a single Gatwick-based aircraft and locally employed crew began with just a handful of routes – the first being Barcelona on 1st February 2002 which was later joined by new routes to Edinburgh, Zurich, Malaga and Palma throughout the same month. Previously, flying had only been in bound from its bases in Geneva, Nice and Amsterdam.

Since then the airline has grown to become Gatwick’s largest and also easyJet’s largest base on its entire network. The airline will operate 79 aircraft from the airport next summer and now serves over 120 routes across Europe, North Africa and the Middle East.

EZY813 from London Gatwick to Barcelona was the very first flight operated by London Gatwick-based crew on a Boeing 737 aircraft which departed at 11:15 on 1st February 2002 with 137 passengers onboard. Since then the airline has flown over 200 million passengers to and from the airport. easyJet now has an all Airbus A320 family fleet including the more efficient neo type which both more fuel efficient and quieter and introduced its first ever A321 neo into the fleet in 2018 which was also based  Gatwick.

easyJet flew around 19m passengers to and from the airport in 2019 and continues to grow. The airline has just added over 1.1 million additional seats on sale from the airport next for summer meaning passengers have an even greater choice of low fared flights when choosing where to take their next trip.

easyJet will also be introducing a new route for customers next summer from Gatwick. On sale later this week, Krk, the largest Island in the Adriatic sea, nestled off the coast of Croatia, is a brand new destination in easyJet’s network and will provide a unique summer holiday hotspot for customers looking to explore beyond the mainstream Mediterranean destinations.  The new route will operate on Tuesdays and Saturdays, starting 3rd May.

“easyJet is delighted to be celebrating 20 years at our London Gatwick base, our largest base in the network. Over the last two decades we have remained committed to providing even more choice for our customers travelling to and from the airport, growing our operation to become Gatwick’s largest airline.

“And we remain focussed on growth at Gatwick; we recently added  over a million extra seats from the airport for next summer and new routes such as our new flights to Krk off the coast of Croatia, continuing to provide passengers with an ever-greater range of destinations all with a convenient schedule, low fares and great service for both leisure and business travellers.

“Now is a great time to book with easyJet. We are excited about our plans at Gatwick for next summer, and we can’t wait to welcome more customers back onboard.”

“easyJet and Gatwick have grown together over the last 20 years and, since that first flight to Barcelona, we have helped millions of passengers go on holiday, visit friends and family or take an important business trip.  The events of the last two years make today’s 20th anniversary of easyJet at Gatwick even more poignant and it feels fantastic that together we can once again offer our passengers the opportunity to enjoy the delights of so many destinations across Europe and beyond.”