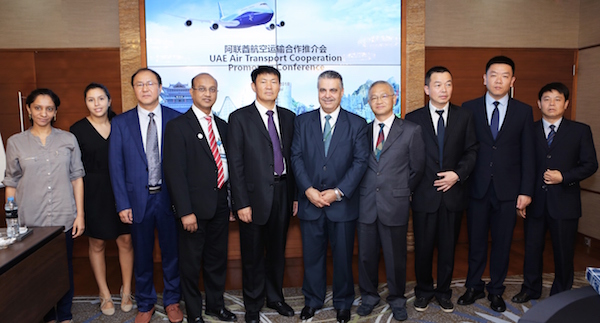 Chinese carrier Uni-top Airlines is planning to operate B747 freighter flight between Kunming in China and Dubai, according to Mr Yang Fan, Vice President of Uni-top Airlines.

Addressing an air transport cooperation promotion conference held by Chinese Yunnan provincial delegation in Kempinski Hotel Mall of Emirates in Dubai, Mr Yang Fan said: “In order to support the development of civil aviation and trade between China and the UAE, Uni-top airlines is planning to operate B747 freighter flight with 3 flights per week between Kunming and Dubai.”

“Chinese President Xi Jinping visited the UAE in July, and the leaders of the two countries unanimously decided to upgrade bilateral relations to a comprehensive strategic partnership. We expect to strengthen joint marketing promotion for airline flights, tourism market and especially air cargo market in order to push the development of bilateral economy and trade, and we also expect to promote abundant green agricultural products with Yunnan plateau characteristics to the UAE for sharing,” he said.

“We had a meeting with Capt. Khalid Humaid Al Ali the Director Air Transport Department of the General Civil Aviation Authority of UAE, and he welcomed more flights between airports in UAE and Yunnan province,” he said.

“I believe that the two sides will fully participate the “Belt and Road” construction, build an air silk way, promote interconnection and intercommunication, play complementary advantages, stimulate trade vitality, foster the cooperation and win-win sails, work together in the same boat, cooperate sincerely, and write a new chapter of friendly air transportation cooperation,” he added.

“Strengthening the tourism, trade and commercial links between China and Dubai is a key strategy for Dubai Airports,” said Khalil Lamrabet, Director – Aviation Business Management, Dubai Airports. “We are honoured and excited to welcome Uni-top Airline’s new service from Kunming in China’s Yunnan province to Dubai World Central (DWC). DWC, which is already in the top 25 airports worldwide for international trade volumes, is ideally suited for this service with state-of-the art facilities and a dedicated, bonded link to Jebel Ali port.”