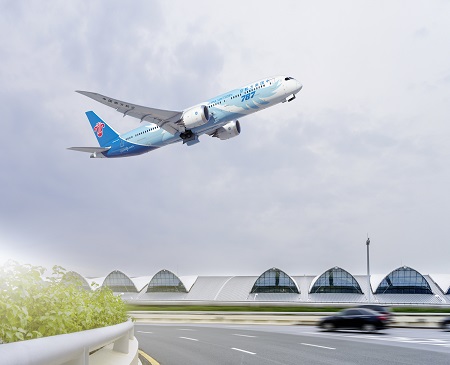 China’s largest carrier by fleet size to operate both variants of Dreamliner family.

“The 787 Dreamliners have helped us to achieve initial success in implementing our internationalization strategy in the past few years and enabled us to make our operation and services more appealing to passengers,” said Tan Wangeng, CEO, China Southern Airlines. “The additional new 787-9s will further increase our capacity and services for our long-haul routes.”

China Southern Airlines, China’s launch customer of the 787, currently operates 10 787-8s. The airplanes have enabled the Guangzhou-based carrier to launch six new non-stop global routes, connecting Guangzhou to London and Rome in Europe, Vancouver in North America, as well as Perth, Auckland and Christchurch in the Oceania area.

“China Southern has been a long-standing Boeing customer and we truly appreciate their confidence in the 787,” said Ihssane Mounir, senior vice president, Northeast Asia Sales, Boeing Commercial Airplanes. “The 787-9 will help the airline achieve a new level of efficiency and profitability.”

The 787-9 complements and extends the super-efficient 787 family. With the fuselage stretched by 6 meters (20 feet) over the 787-8, the 787-9 will fly more passengers and more cargo farther with the same exceptional environmental performance. Like the 787-8, the 787-9 brings the economics of large jets to the middle of the market, with 20 percent less fuel use and 20 percent fewer emissions than similarly sized airplanes.

China’s largest airline by fleet size, China Southern Airlines currently operates 700 aircraft, including Boeing 787, 777, 747, 757 and 737s. By 2020, the airline expects to have a fleet of 1,000 aircraft with passenger traffic surpassing 160 million annually.