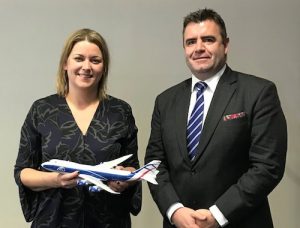 The airline already employs some 200 personnel and operates a fleet of three Boeing 747 freighters, including the new generation 747-8F.

During the meeting, the CargoLogicAir team highlighted how the airline’s growing network is helping UK companies in industries such as oil&gas, pharmaceuticals, aerospace, automotive and high-tech products to boost international trade. CLA is also supporting strong demand for cargo capacity to satisfy fast-growing volumes of e-commerce shipments.

The Minister also heard how CLA played a key role in delivering humanitarian aid from the UK to the Caribbean following Hurricane Irma, highlighting the value of British all-cargo aircraft capacity to meet fast-response deadlines for life-saving relief goods after natural disasters around the world.

CargoLogicAir also took the opportunity to support the position of the government to consider continuing the UK’s longstanding membership in EASA, the European Aviation Safety Agency.

David Kerr commented: “We see it as highly significant that Baroness Sugg was so interested in hearing about the UK freight market and its requirements, as well as the development of CargoLogicAir to support the growth of UK trade. We are very upbeat about the UK’s growth prospects and continue to invest in building a team, fleet and network ready to support a very positive future for British business in the global market. CLA is ready to support government and industry initiatives to bolster trade links through the provision of reliable, high quality air cargo services.”