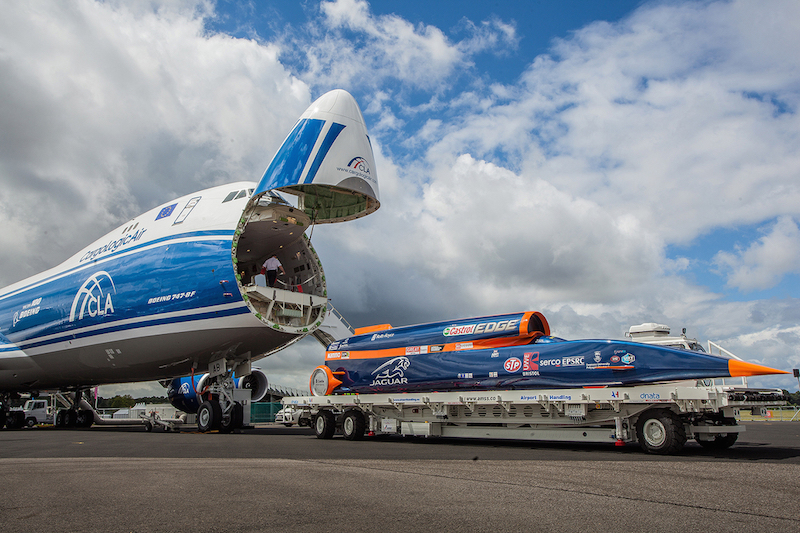 CargoLogicAir, official cargo airline partner of Bloodhound SSC, has congratulated the Bloodhound team on their first public run of the car, which aims to set a new World Land Speed Record and, ultimately, break through the 1,000mph barrier.

Representatives of the British all-cargo airline joined 3,500 spectators at Cornwall Airport Newquay to witness Bloodhound successfully complete its first test to run at 200mph. The event came 20 years after Bloodhound’s driver, Andy Green, set the current land speed record of 763.035mph in the Black Rock desert in the United States.

Driving in public for the first time, Bloodhound completed two runs along Newquay’s 9,000 foot runway, accelerating at a rate of 1.5G to reach 210mph from a standing start in just eight seconds. The team’s success was live-streamed to audiences all over the world. For these runs, Bloodhound was powered by a Rolls-Royce EJ200 jet engine, normally found in a Eurofighter Typhoon and producing the equivalent thrust horsepower of 360 family cars.

The team plans further runs in 2018 at increased speeds before attempting their new world record attempt at Hakskeen Pan in South Africa. Bloodhound will be transported to and from South Africa onboard one of CargoLogicAir’s Boeing 747 freighters.

Dmitry Grishin, CEO of CargoLogicAir, said: “We wish to congratulate the Bloodhound SSC team on another successful step towards making history by setting a new World Land Speed Record. We are proud to be partnering with such an outstanding team of engineering professionals and will be following their progress with keen interest before they fly with CargoLogicAir to South Africa for their world record attempt.”

The runway trials in Newquay came at the end of a month of testing at the airport, where the team has been checking the integration of the EJ200 jet engine as well as the car’s steering, brakes, suspension, data systems and other functions. It has also given the Bloodhound team the opportunity to test operating procedures, safety protocols and to practice radio communications.