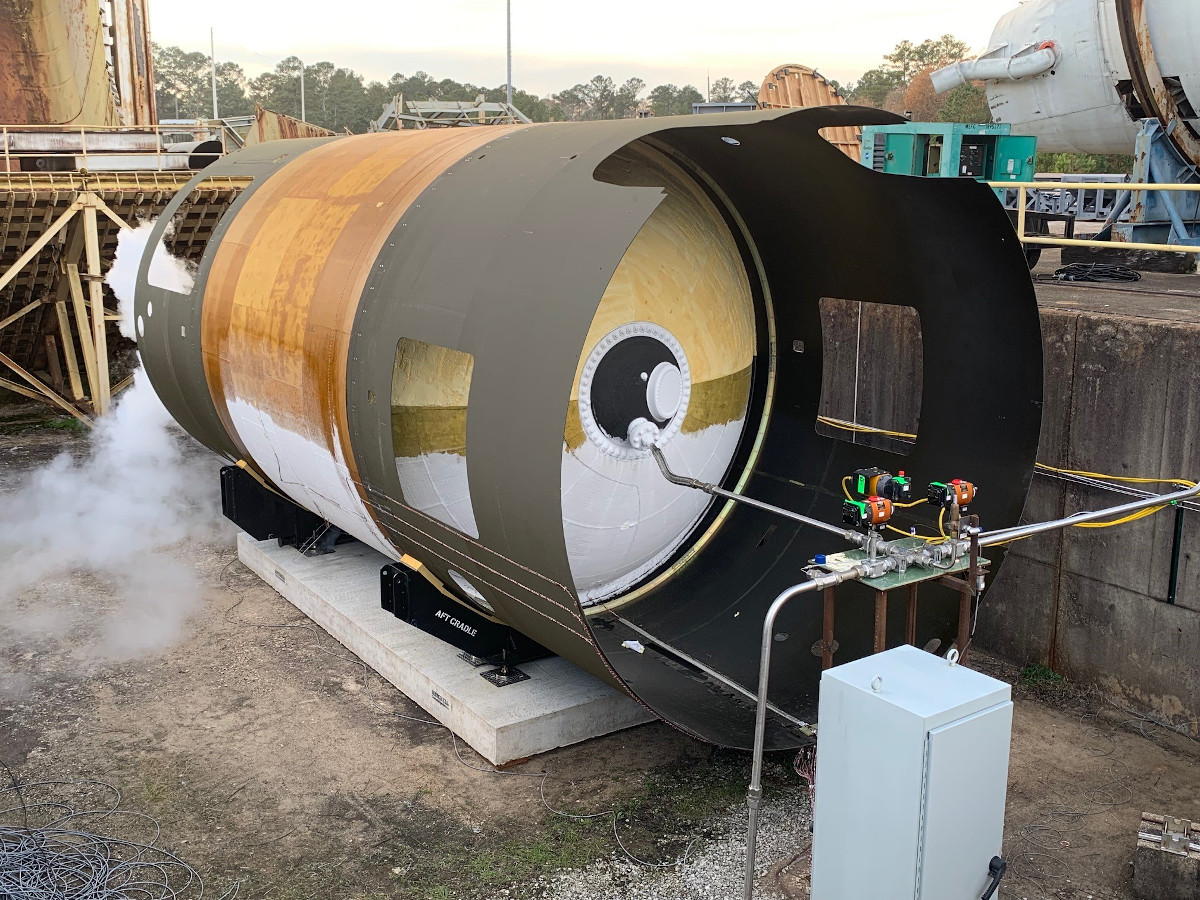 A new type of large, fully-composite, linerless cryogenic fuel tank, designed and manufactured by Boeing [NYSE: BA], passed a critical series of tests at NASA’s Marshall Space Flight Center at the end of 2021. The successful test campaign proves the new technology is mature, safe and ready for use in aerospace vehicles.

The 4.3-meter (14 foot) diameter composite tank is similar in size to the fuel tanks intended for use in the upper stage of NASA’s Space Launch System (SLS) rocket, which is the foundational capability in NASA’s Artemis lunar and deep space human exploration program. If the new composite technology were implemented in evolved versions of the SLS’s Exploration Upper Stage, the weight savings technology could increase payload masses by up to 30 percent.

“Composites are the next major technological advancement for large aerospace cryogenic storage structures,” said Boeing Composite Cryotank Manufacturing Lead Carlos Guzman. “And while they can be challenging to work with, they offer significant advantages over traditional metallic structures. Boeing has the right mix of experience, expertise and resources to continue to advance this technology and bring it to market in a variety of applications across aerospace and aeronautics.”

During the testing, which was funded by DARPA and Boeing, engineers from Boeing and NASA filled the vessel with cryogenic fluid in multiple test cycles, pressurizing the tank to expected operational loads and beyond. In the final test, which intended to push the tank to failure, pressures reached 3.75 times the design requirements without any major structural failure.

“NASA’s support through this testing has been invaluable,” said Boeing Test Program Manager Steve Wanthal. “We were able to use their technical expertise and investments made in the testing infrastructure at the Marshall Space Flight Center to continue to advance this technology, which will ultimately benefit the entire industry.”

Applications for the technology expand past spaceflight. The test which builds upon Boeing’s extensive experience with the safe use of hydrogen in aerospace applications will inform Boeing’s ongoing studies of hydrogen as a potential future energy pathway for commercial aviation. In addition to use in space programs, Boeing has completed five flight demonstration programs with hydrogen.

As a leading global aerospace company, Boeing develops, manufactures and services commercial airplanes, defense products and space systems for customers in more than 150 countries. As a top U.S. exporter, the company leverages the talents of a global supplier base to advance economic opportunity, sustainability and community impact. Boeing’s diverse team is committed to innovating for the future and living the company’s core values of safety, quality and integrity. Learn more at www.boeing.com.