Boeing, as many other industry giants, is getting ready for the Paris Air Show – a “debutante ball” where many of today’s household name planes have had their first waltz with potential courters. This year it might be the turn of 737 MAX family final member – the 737 MAX 10 – to take the spotlight and woo a couple of clients.

The company might have already found a proper courter – Indonesia’s low-cost carrier Lion Air – to play the role of the launch customer. The news was announced in the beginning of the week but the manufacturer is yet to confirm it. Other potential first clients include India’s SpiceJet (which is coincidentally eyeing the long-haul market) and America’s United.

The latest addition to the 737 MAX family would seat around 230 passengers in a single-cabin layout common among LCCs or 189 passengers in two-class capacity. At a length of 43.8 meters (only a modest 1.68 m or two rows longer than the MAX 9), the new variant does not require a thorough re-design, the only major change being the trailinig-link landing gear modification. This means that the model can be fitted with same wing and CFM LEAP 1B engines as the MAX 9. 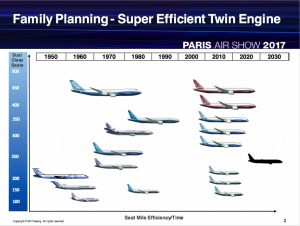 Playing catch-up with the A321neo

With the Airbus A321neo having outsold the 737 MAX 9 variant and amassing 1416 orders, the MAX 10 – that will enter the commercial market by the end of the decade – will certainly be compared to the “neo” more often than Boeing would fancy it.

“We aren’t looking to simply build something on par with the A321neo,” said Randy Tinseth, Boeing VP for marketing. “We’re bringing a better airplane to the market – and that’s our focus.”

Tinseth also claims that 737 MAX 10 will offer the same capacity as the slightly longer Airbus A321neo, but will be 2.8 tons lighter, have lower fuel consumption and slightly greater range.

Of course, not everyone is giddy about the debutante that might actually be several years late to the party. John Leahy, the soon-to-retire sales chief of Airbus has been quoted saying that their US counterpart is suffering from a middle of the market crisis.

“We [Airbus] have now moved into the middle of the market and we dominate it,” Leahy said during a press event at the recent IATA conference in Cancun. “They’re flailing about coming up with idea after idea after idea. They’re constantly creating paper airplanes and going around, saying, ‘don’t buy the A321, there’s something new just over the horizon’. I’ve put up with that for 23 years.”

Nevertheless, Leahy is hopeful about his arch rival to launch the 737 MAX at Le Bourget.

“I hope they do it,” Leahy said in Cancun. “I think it’s a very marginal airplane. I’m reminded of the 767-400 and the 757-300. They’ve done all sorts of things with products where they’ve tried to squeeze a few extra seats and gave up range and performance. They market never accepted any one of those airplanes. I think this would be a good competitive move for them to make.”

Boeing has already confirmed that a 737 MAX 9 flight test airplane alongside the 787-10 Dreamliner will participate in the flying display at the Paris Air Show. With likely appearances of Lockheed’s F-35, Mitsubishi MRJ, Embraer KC-390, and many more, Paris is going to a debutante ball to remember.