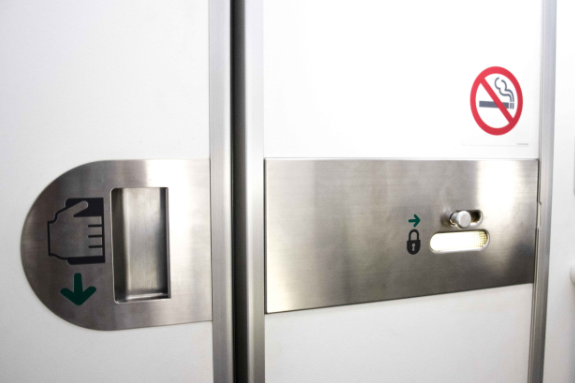 All Nippon Airways (ANA), Japan’s largest and 5-Star airline for eight consecutive years, has partnered with JAMCO Corporation to develop the world’s first hands-free door that allows easy access to lavatories on its aircraft. The innovative door was developed as part of the ANA Care Promise initiative, and will help limit potential vectors for the transmission of pathogens. The first hands-free doors will be introduced to domestic flights starting May 1. 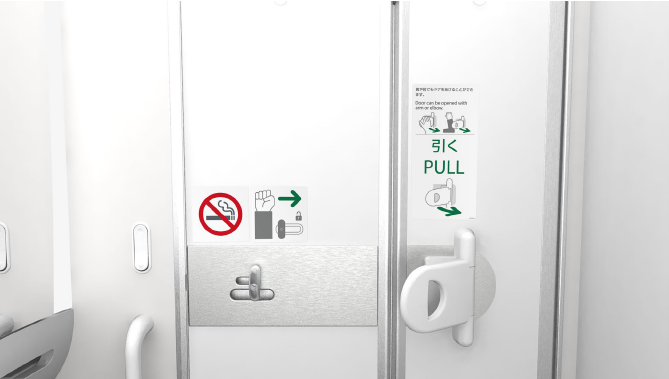 “Guided by the principles of ANA Care Promise, we have continued to invest in the development and implementation of innovative technologies because the health and safety of passengers and our staff is the top priority,” said Shinichi Inoue, Senior Executive Vice President, Customer Experience Management & Planning. “The hands-free lavatory door is the latest example of us putting this principle into practice as we look for ways to make the travel experience safer and more convenient.”

The new lavatory door is equipped with a large inner door locking knob and an additional handle so that passengers can use their elbows to unlock the door. Because the door mechanism is different to those found on other aircraft, signage has been placed near the lavatory to provide operational instructions.

The hands-free lavatory will be installed on 11 Boeing 787-8 aircraft, two Boeing 787-9 aircraft, and eight Boeing 777-200. The initial installation will be for aircrafts serving domestic routes, while ANA hopes to introduce the system to all domestic and international aircraft in the future.

To help mitigate the spread of COVID-19 and other pathogens, ANA has instituted the ANA Care Promise program which goes above and beyond the recommendations from public health officials in order to keep passengers and employees healthy. With such efforts, ANA  is the first airline in Asia and only the fourth in the world to receive the SKYTRAX Airline Safety 5-Star rating which confirms the effectiveness of ANA Care Promise.

About ANA
Following the “Inspiration of Japan” high quality of service, ANA has been awarded the respected 5-Star rating every year since 2013 from SKYTRAX. ANA is the only Japanese airline to win this prestigious designation eight years in a row. Additionally, ANA has been recognized by Air Transport World as “Airline of the Year” three times in the past 10 years – 2007, 2013 and 2018, becoming one of the few airlines winning this prestigious award for multiple times.

ANA was founded in 1952 with two helicopters and has become the largest airline in Japan, as well as one of the most significant airlines in Asia, operating 82 international routes and 118 domestic routes (as of December 2019). ANA offers a unique dual hub model which enables passengers to travel to Tokyo and connect through the two airports in the metropolitan Tokyo, NARITA and HANEDA, to various destinations throughout Japan, and also offers same day connections between various North American, Asian and Chinese cities.

ANA has been a member of Star Alliance since 1999 and has joint venture partnerships with United Airlines, Lufthansa German Airlines, Swiss International Airlines and Austrian Airlines.

In addition to the full service and award-winning record of ANA, the ANA Group’s subsidiary Peach Aviation Limited is the leading LCC in Japan, and has expanded following the integration of Vanilla Air Inc. in late 2019. The ANA Group carried 54.4 million passengers in FY2018, has approximately 43,000 employees and a fleet of 260 aircraft. ANA is a proud launch customer and the biggest operator of the Boeing 787 Dreamliner.

For more information, please refer to the following link.
https://www.ana.co.jp/group/en/