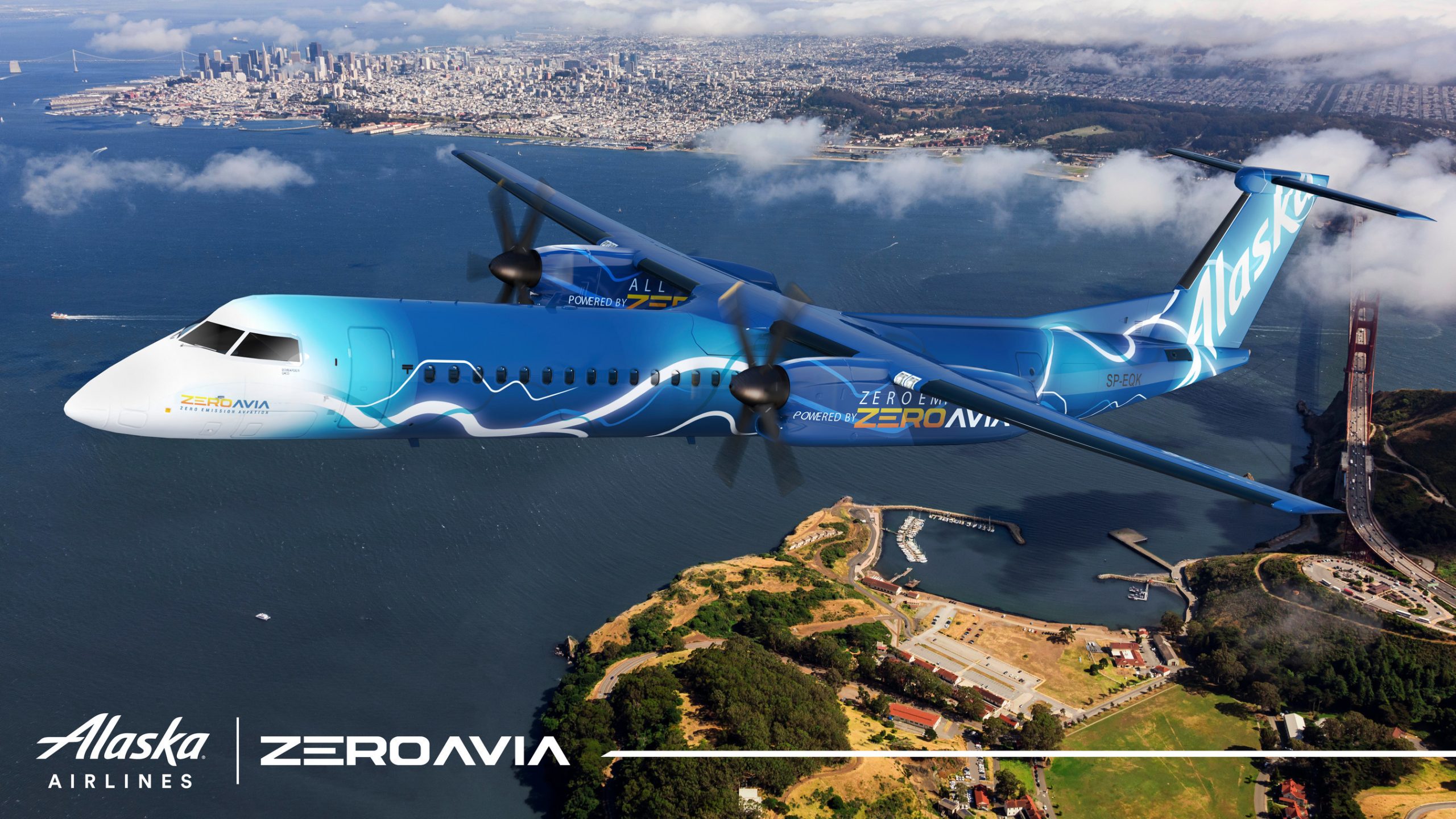 ZeroAvia is gaining altitude as the leader in zero-emission passenger aircraft as it announces a development collaboration with Alaska Air Group, the parent company of Alaska Airlines, for a hydrogen-electric powertrain capable of flying 76-seat regional aircraft in excess of 500 NM. Alaska is also joining the list of top investors for the company, alongside a fellow Seattle-based Amazon Climate Pledge Fund and Bill Gates’s Breakthrough Energy Ventures.

“Alaska is committed to creating a sustainable future for aviation, working on all aspects of  a five-part path toward our goal of net zero by 2040,” said Diana Birkett Rakow, vice president of public affairs and sustainability for Alaska Airlines. “We are honored to partner with ZeroAvia’s innovative and forward-thinking team, to support their progress developing zero-emissions aviation, and to collaborate for real-world hydrogen aviation success.”

Alaska and ZeroAvia engineers will work together to scale the company’s existing powertrain platform to produce the ZA2000, an engine family capable of producing between 2,000 and 5,000 kilowatts of power with a 500-mile range. The partnership will initially deploy ZeroAvia’s hydrogen-electric propulsion technology into a full-size De Havilland Q400 aircraft, previously operated by Alaska Air Group subsidiary Horizon Air Industries, Inc., capable of transporting 76 passengers. ZeroAvia will also work closely with aircraft regulators during this project to ensure the aircraft meets both safety and operational requirements. ZeroAvia will set up a location in the Seattle area to support this initiative.

Alaska has also secured options for up to 50 kits to begin converting its regional aircraft to hydrogen-electric power through ZeroAvia’s zero-emission powertrain, starting with the Q400 aircraft. This pioneering zero-emission aviation rollout will be supported by the ground fuel production and dispensing infrastructure from ZeroAvia and its infrastructure partners, such as Shell. Working to advance novel propulsion is one of the five parts of Alaska’s strategy to achieve net zero.

“The aviation industry is one of the hardest industries to decarbonize; however, with this collaboration, we are one step closer to achieving our goal of making our skies emission-free,” said Val Miftakhov, CEO and founder of ZeroAvia. “We are thrilled to see Alaska taking the lead to implement clean technologies into their operations and look forward to putting boots on the ground with Alaska’s team..”

Recently, ZeroAvia also successfully ground-tested its 600kW powertrain capable of flying airframes 10-20 seats in size 500 miles, is well advanced in preparing a 19-seat aircraft for flight testing at Cotswold Airport in the UK and is moving to full-size prototype manufacturing of its 2,000 kW engine for demonstrations in 2022.

ZeroAvia is a leader in zero-emission aviation, focused on hydrogen-electric aviation solutions to address a variety of markets, initially targeting 500 mile range in 9-19 seat aircraft used for commercial passenger transport, cargo, agriculture, and more. Based in the UK and USA, ZeroAvia has already secured experimental certificates for two prototype aircraft from the CAA and FAA, passed significant flight test milestones, and is on track for commercial operations in 2024 for its 600kW engines, and 2026 for its 2,000-5,000kW engine platform. The company’s expanding UK operations are supported by grants from UK’s Aerospace Technology Institute and Innovate UK, and ZeroAvia is part of the UK Prime Minister’s Jet Zero Council. For more information, please visit ZeroAvia.com and follow @ZeroAvia on Twitter, Instagram, and LinkedIn.

Alaska Airlines and its regional partners serve more than 120 destinations across the United States and to Mexico, Canada and Costa Rica. The airline emphasizes Next-Level Care for its guests, along with providing low fares, award-winning customer service and sustainability efforts. Alaska is a member of oneworld. With the global alliance and the airline’s additional partners, guests can travel to more than 1,000 destinations on more than 20 airlines while earning and redeeming miles on flights to locations around the world. Learn more about Alaska at newsroom.alaskaair.com and blog.alaskaair.com. Alaska Airlines and Horizon Air are subsidiaries of Alaska Air Group .