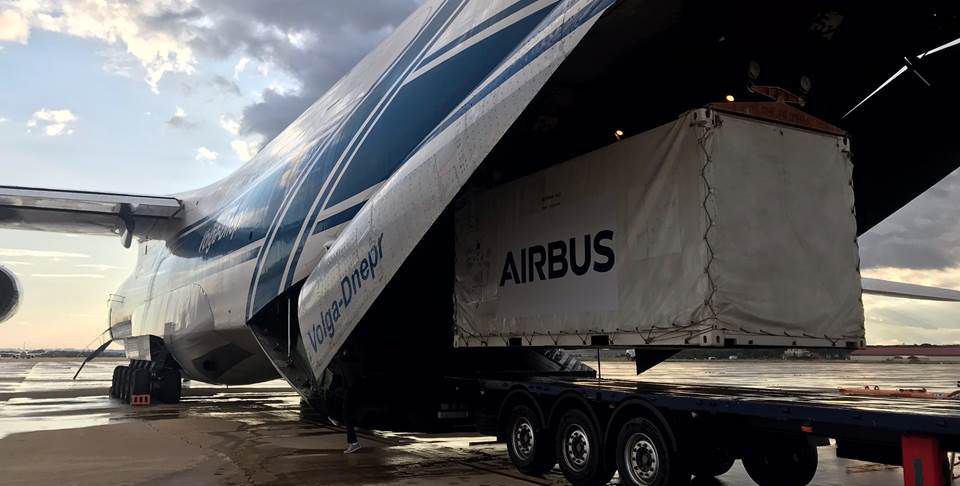 Last night, the Spanish satellite SEOSAT-Ingenio, built by Airbus, was loaded at the Torrejón de Ardóz air base, near Madrid, on board an Antonov 124 cargo plane to fly to the Kourou launch site. SEOSAT-Ingenio shares the flight to Guyana with the French satellite Taranis from CNES.

Once in Kourou, the launch campaign will begin including functional tests, integration on the launcher adapter and encapsulation into the launcher for final inspection. Launch is scheduled for 18 November aboard a Vega launcher. As both SEOSAT-Ingenio and Taranis are destined for similar orbits, at an altitude around 700km, they will ride-share on this launch. A VESPA payload dispenser, produced by Airbus in Madrid for Avio, will enable Vega to accomplish this dual launch.

SEOSAT-Ingenio is the first Spanish satellite with optical technology, developed primarily by the Spanish space industry led by Airbus in Spain as the prime contractor. It will give Spain the capability to capture high resolution satellite images. Imagery will be used for civil and military purposes covering services such as: security, land management, natural resources, border surveillance, agriculture and crisis management for natural disasters. Together with the PAZ satellite, launched in 2018, Spain will have a dual Earth observation system for both optical and radar imagery. This combined data set will produce higher resolution images and better information about our planet to Hisdesat, operating the constellation for the Spanish government.

SEOSAT-Ingenio is a strategic satellite for Spain and is owned by the Ministry of Science and Technology. The Centre for Industrial Technological Development (CDTI) leads the project by delegation and also assumes its cost.