Air Austral, France’s Réunion Island-based airline, has signed a firm order for three A220 aircraft, Airbus’ newest family member. With this order Air Austral becomes the first A220 customer based in the Indian Ocean region. Benefitting from a 20% reduction in fuel burn and CO2 emissions, the A220s will enable Air Austral to reduce its costs and carbon footprint on international routes in the region.

“Air Austral has chosen the A220-300 as part of the renewal of its Medium and Short Haul fleet. These new-generation aircraft will join the airline from the end of 2020 with the aim of harmonising part of its fleet and strengthening its operations,” said Marie-Joseph Malé, Chief Executive Officer of Air Austral. “The economic and operational performance of the A220 opens new possibilities for the development of our regional network from our main base – Réunion Island – in an efficient and rational way. The 132-seat capacity module, which is more flexible, will allow us to increase our frequencies while offering more comfort to our customers and crews,” he added.

“With its unrivalled performance and operational flexibility, the A220 is the perfect aircraft for Air Austral to reinforce routes between Réunion Island and its neighbours in the Indian Ocean, as well as connecting the island further afield,” said Christopher Buckley, Executive Vice-President Commercial – Airbus. “Airlines from all around the world are acknowledging the A220’s economics and it is a great honour that Air Austral will be the first A220 operator in the region.”

The A220 is the only aircraft purpose-built for the 100-150 seat market; it delivers unbeatable fuel efficiency and widebody passenger comfort in a single-aisle aircraft. The A220 brings together state-of-the-art aerodynamics, advanced materials and Pratt & Whitney’s latest-generation PW1500G geared turbofan engines to offer at least a 20% lower fuel burn per seat compared to previous generation aircraft, along with significantly lower emissions and a reduced noise footprint. The A220 offers the performance of larger single-aisle aircraft. 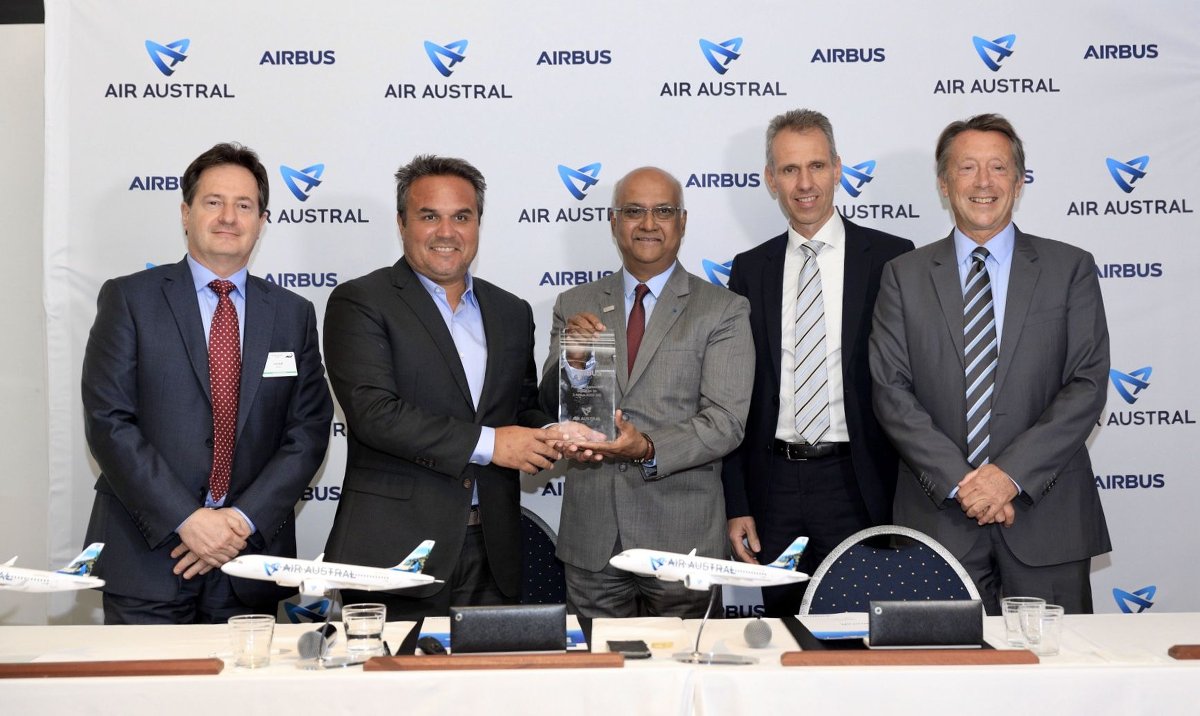 All images courtesy of Airbus