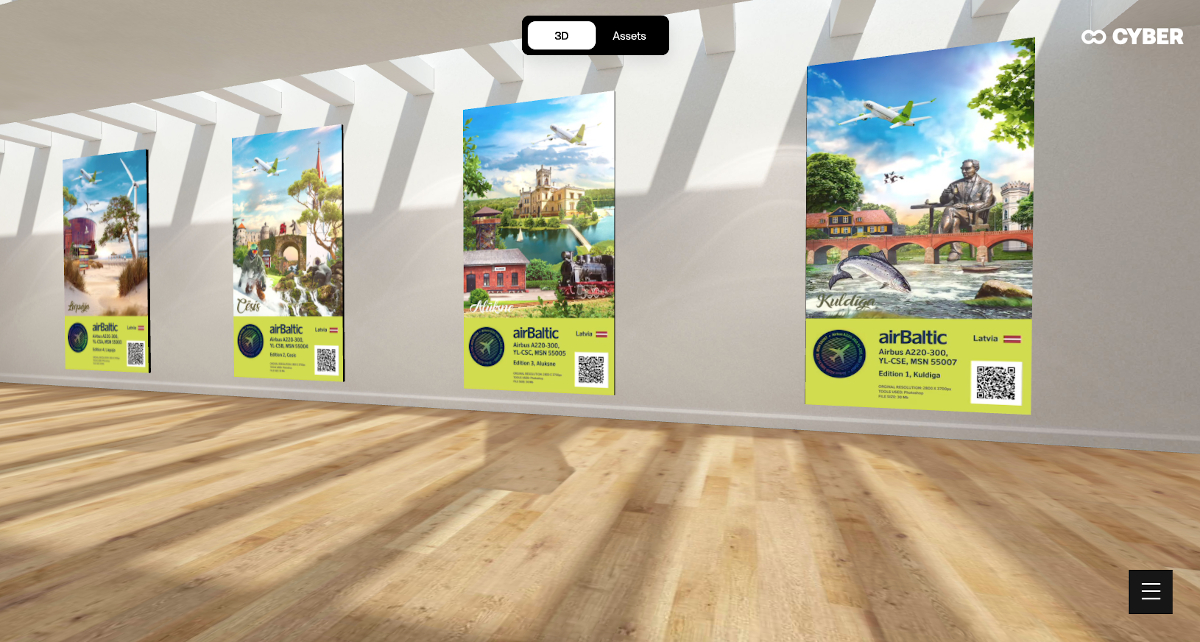 Latvian airline airBaltic has become the first airline globally to show its non-fungible tokens (NFTs) in Metaverse. The 3D gallery of airBaltic NFTs can be found here: https://oncyber.io/airbaltic-city-collection.

On April 14, Latvian airline airBaltic became the world’s first airline to issue non-fungible tokens (NFTs). The airline issued limited collector NFTs, showcasing an individual Airbus A220-300 with its registration as well as a piece of art of Kuldīga, one of the most beloved Latvian cities. Following the first edition airBaltic has issued four more digital art pieces honouring beloved Latvian cities Cēsis, Alūksne, Liepāja, Bauska and Sigulda. 55 NFTs of the first historic release can still be purchased, but the NFTs from following four editions are sold out.

Metaverse is an expansive network of persistent, real-time rendered 3D worlds and simulations.

airBaltic is well known as the airline for innovation among global carriers. In 2014, airBaltic became the world’s first airline to accept Bitcoin payments for its flight tickets. Now, in cooperation with service provider BitPay, airBaltic accepts also other cryptocurrencies like Bitcoin Cash, Ether and Dogecoin among others for bookings made on its website.

airBaltic (Air Baltic Corporation AS) is one of the most punctual airlines in the world connecting the Baltic region with over 70 destinations in Europe, the Middle East, and the CIS. airBaltic is a joint stock company that was established in 1995. Its primary shareholder is the Latvian state, which holds 96.14% of the stock, while Lars Thuesen holds 3.86% through his fully-owned Aircraft Leasing 1 SIA. airBaltic operates 32 Airbus A220-300 aircraft. airBaltic has received numerous international awards for excellence and innovative services. Skytrax has awarded Latvian airline airBaltic a five–star COVID-19 safety rating. In addition, airBaltic is one of the Top twenty airlines for COVID-19 compliance by the safety, product, and COVID-19 rating agency Airlineratings.com. In 2017, the airline received the CAPA Regional Airline of the Year award, while in 2018 and 2019 airBaltic received the ATW Airline Industry Achievement Award as the Market Leader of the Year. In addition, in 2019 airBaltic received the Sector Leadership Award by Airline Business.