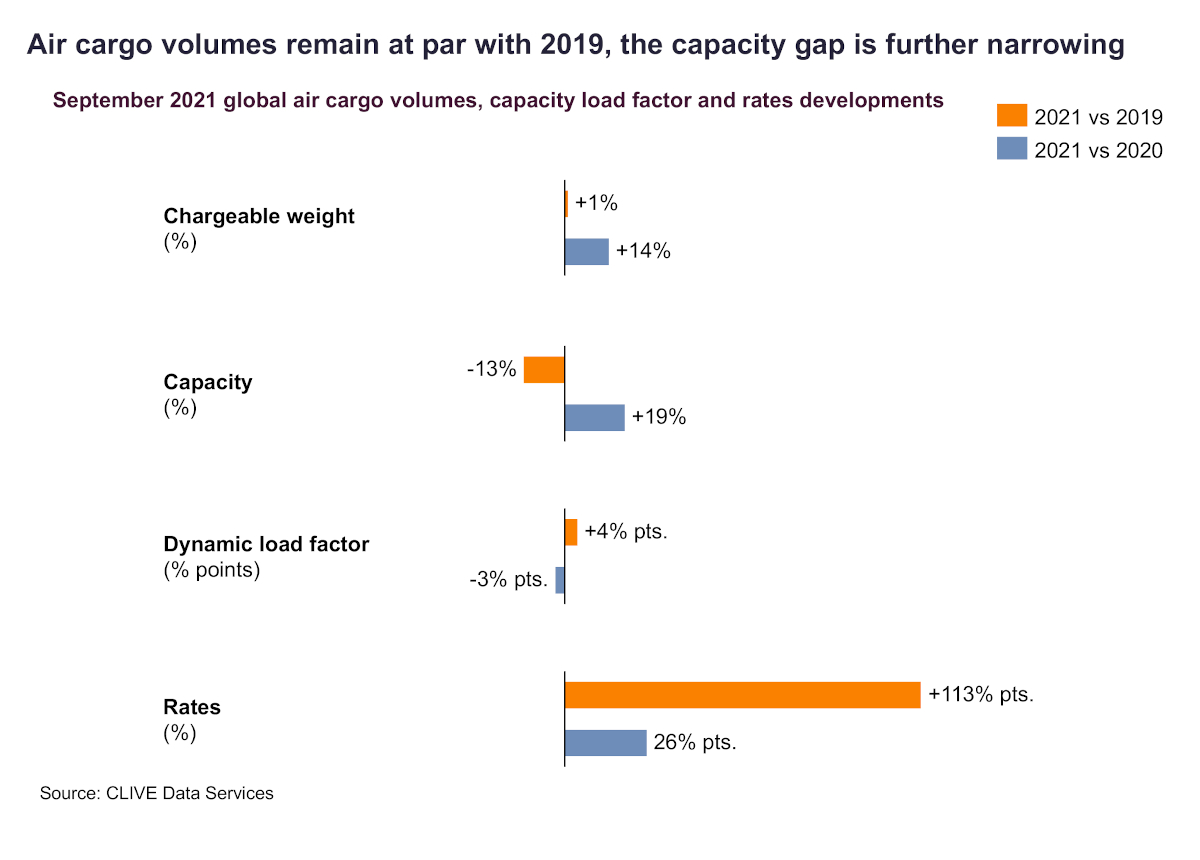 CLIVE’s ‘dynamic loadfactor’ – which measures both the volume and weight perspectives of cargo flown and capacity available to produce a true indicator of airline performance – rose to 68% in the last week of the month, higher than any pre-covid peak season level since CLIVE began sharing data in May 2018.

As in previous months, CLIVE’s latest market intelligence reports air cargo market performance to pre-covid 2019 levels, as well as 2020 year-over-year comparisons, to provide meaningful analyses of the current conditions. Data for September 2021 shows chargeable weight of +1% vs 2019, on a par with recent months, slowly tapering the gap to September 2020 volumes to +14% following the +23% and +19% levels reported in July and August 2021.

Capacity remained constrained at -13% versus the pre-covid level seen in September 2019, while in August it was still -16% versus 2019, although this more reflects the reduction in capacity in 2019 because of the ending of the summer season than an increase in capacity in 2021. Compared to August 2021, global air cargo capacity was more-or-less flat on a like-for-like basis month-over-month.

The dynamic loadfactor for September overall remained at 66% – but saw a strong upward trend towards the end of the month. This growing demand was reflected in continued higher pricing levels, with the average rate in September 2021 following a similar trend to the previous month at more than double the average rates (+113% pts) in 2019. Versus 2020, following the + 15% pts rise in rates in August, September saw a +26% pts increase as demand vs. supply further improved the ‘sellers’ market’, highlighting the strain on the air cargo supply chain.

“This September data shows just the early stages of the typical Q4 surge, but many signals and commentaries seem to suggest that this will not be a ‘typical’ peak season. The recent week-over-week increase in load factor is a significant jump by any standards and shows the pressure on the air cargo supply chain is clearly further heating up. If airlines are micromanaging their capacity right now, they can benefit from it quite substantially,” said Niall van de Wouw, CLIVE’s Managing Director.

He added: “Currently, air cargo capacity is still largely controlled by cargo departments of airlines, and I see no reason why this will change in the immediate term. We might, however, not be too far away from this starting to change as certain lanes traditionally dominated by passenger flights begin to open up again for passenger travel, like the transatlantic. This is obviously extremely important to the long-term health and survival of passenger airlines, but it will also be a bittersweet moment after the heroics of the cargo industry. The role of air cargo within the airline boardroom will likely start to recede and impact the demand vs. supply ratio once again.”

CLIVE’s ‘dynamic load factor’ analysis refreshes the way air cargo capacity usage is traditionally measured to reflect modern day reality. It is based on the fact that airlines’ cargo capacity nearly always ‘cube out’ before they ‘weigh out’ as a result of an aircraft’s higher capacity density (available kgs per cubic meter) than the average density of the goods moved by air. Consequently, CLIVE says, traditional load factors, based only on weight, underestimate how full planes really are, and thus give a distorted picture of how the industry really is performing.

CLIVE’s air cargo industry intelligence consolidates data shared by a representative group of international airlines operating to all corners of the globe. Based on both the volume and weight perspectives of the cargo flown and capacity available, it uses weekly analyses to give the air cargo industry the earliest possible barometer of market performance each month.