AEGEAN announced that on 5th December the signing ceremony of a Memorandum of Understanding with Pratt & Whitney to power up to 62 Airbus A320neo Family Aircraft with GTF™ Engines took place.

The Memorandum of Understanding was signed by Mr. Eftichios Vassilakis, AEGEAN President, Mr. Dimitris Gerogiannis AEGEAN Chief Executive Officer and Mr. Rick Deurloo, Senior Vice President of Sales, Marketing and Customer Support, of Pratt & Whitney, in the presence of His Excellency Geoffrey R. Pyatt,  Ambassador of the United States of America to Greece.

Through the signing of Memorandum of Understanding, AEGEAN expands the existing successful partnership with Pratt & Whitney, which already powers the airline’s fleet of 49 A320ceo family aircraft  with V2500® engines.

The Pratt & Whitney GTF family is the next generation of commercial jet engines. As of today, more than 290 GTF-powered aircraft have been delivered to 32 operators around the world.

GTF™ engine is the most cost-effective and environmentally friendly available option in the market. Since entering into service in early 2016, the GTF engine has demonstrated its promised ability to reduce fuel burn by 16 percent, to reduce NOx emissions by 50 percent to the regulatory standard and to lower the noise footprint by 75 percent.

In the context of the agreement, Pratt & Whitney will also provide AEGEAN with engine maintenance through a long-term service agreement.
Mr. Dimitris Gerogiannis, CEO of AEGEAN, said: “The selection of GTF™ engines opens a new chapter in our long-standing partnership with Pratt & Whitney. Our aircraft will be powered with the most advanced technology engines. This agreement is expected to offer a substantial improvement in our company’s efficiency through significantly reduced fuel consumption and optimization of maintenance costs through the long-term engines maintenance service agreement”.

Mr. Rick Deurloo, Senior Vice President of Sales, Marketing and Customer Support, of Pratt & Whitney, noted: “We couldn’t be more proud celebrating the extension of our long-standing relationship with Aegean, which dates back to the airline’s beginning in 1999. GTF™engine has revolutionized the technology in the aviation industry and will provide Aegean with proven performance and environmental benefits. We are honored to power and support Aegean’s new fleet of A320neo family aircraft ”. 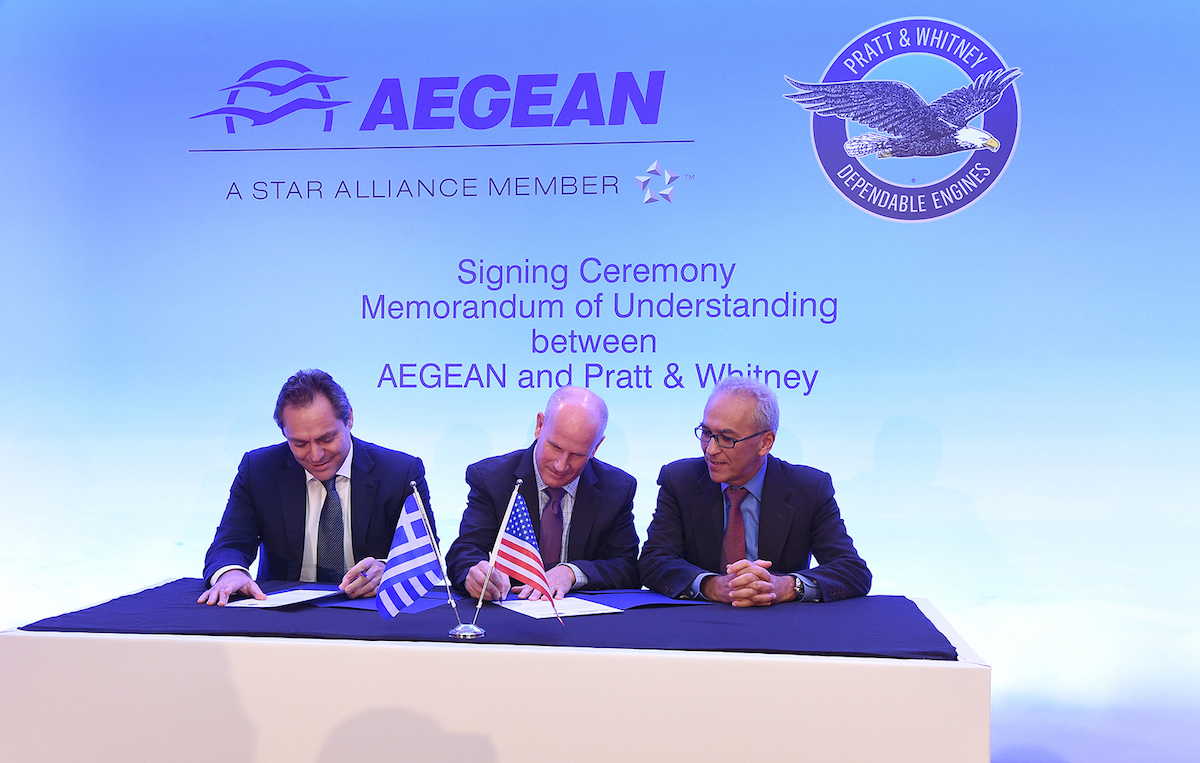