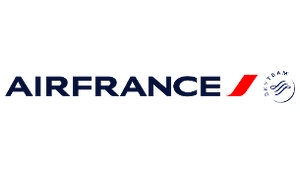 In November 2019, Air France, CHARLATTE AUTONOM and Toulouse-Blagnac airport brought into service an autonomous tractor for transporting baggage between the baggage sorting area and aircraft. The testing in real conditions of this baggage tractor brings us one step closer to creating the smart airport of the future.

With the roll-out of smart, autonomous vehicles, air transport players aim to improve baggage flow performance and ramp safety at airport hubs. By automating traffic flows, operators can focus on decision-making and management actions, which saves time and efficiency when handling aircraft.

A co-innovation between air transport players

The testing of this AT135 baggage tractor developed by the subsidiary of companies Charlatte Manutention and NAVYA, CHARLATTE AUTONOM, is the result of a close collaboration between several recognized air transport players, who have been working together to design the airport of the future.
TCR handles the tractor’s daily maintenance requirements. The autonomous vehicle is supervised by agents from the Groupe 3S who have expertise in ground handling operations. Air France also shares its support and expertise with Toulouse-Blagnac airport by integrating its operations and infrastructure into the tests.

The tasks of the autonomous tractor

Once the passengers’ baggage has reached the baggage sorting area, the autonomous baggage tractor intervenes in the following way –
– An agent from Groupe 3S, an Air France subcontractor, places the baggage in containers connected to the autonomous tractor.
– The baggage tractor is a smart vehicle that moves autonomously around the airport to reach the Air France aircraft. Its destination is pre-programmed via a touchscreen by an agent from the Groupe 3S.
– As it nears the aircraft, the tractor stops and the agent takes control of the vehicle and subsequently loads the baggage in the aircraft hold.
– The vehicle returns to the baggage sorting area taking the same route in the reverse direction.

To carry out its tasks and integrate ramp traffic, the vehicle is equipped with intelligent sensors that enable it to recognize its environment, position itself with great precision, detect obstacles at 360° and make decisions. Thanks to its sensors (Lidar, camera, GPS, odometer) and its autonomous steering software, the vehicle can move around the airport autonomously. The AUTONOM TRACT also communicates with the hub’s traffic signals.

The autonomous electric baggage tractor has been operational at Toulouse-Blagnac airport since 15 November and has been able to navigate the environment autonomously thanks to specific authorizations. 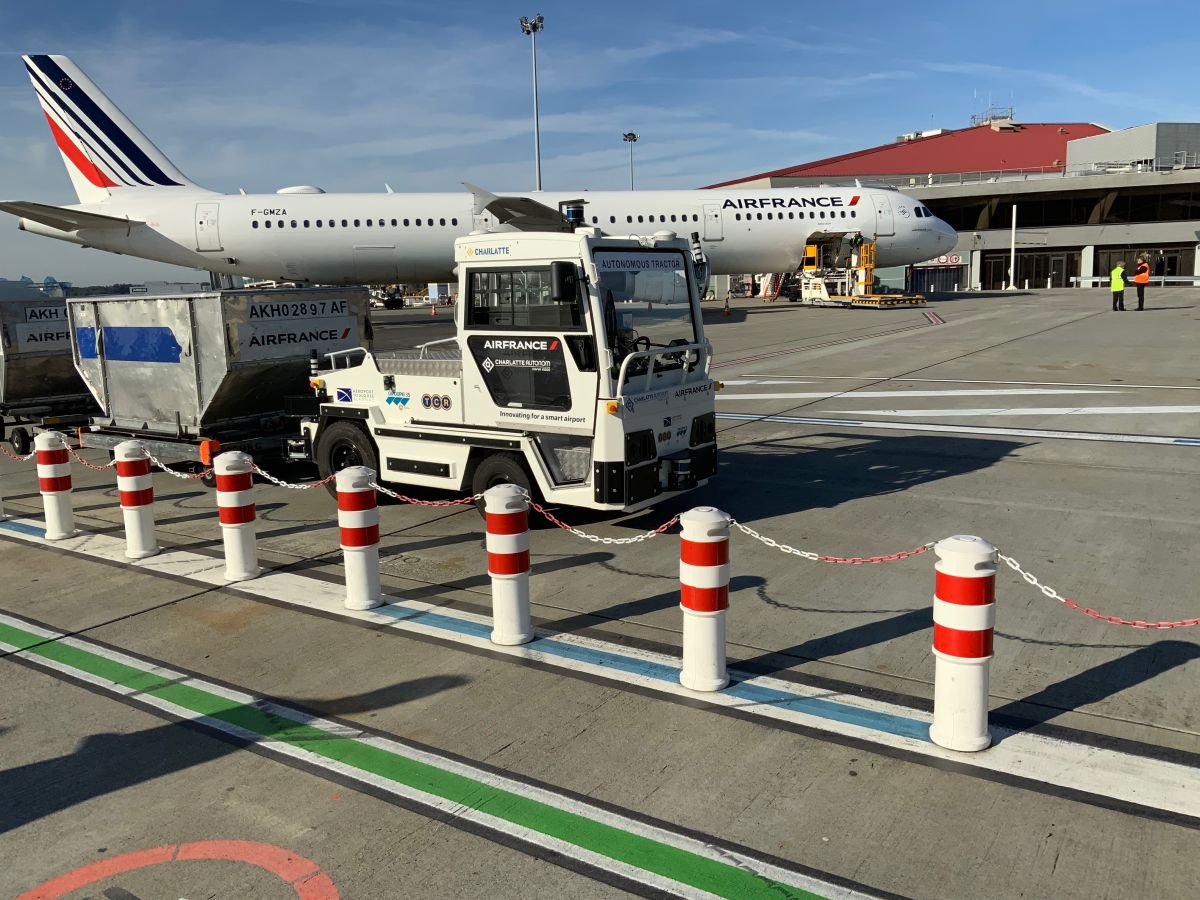 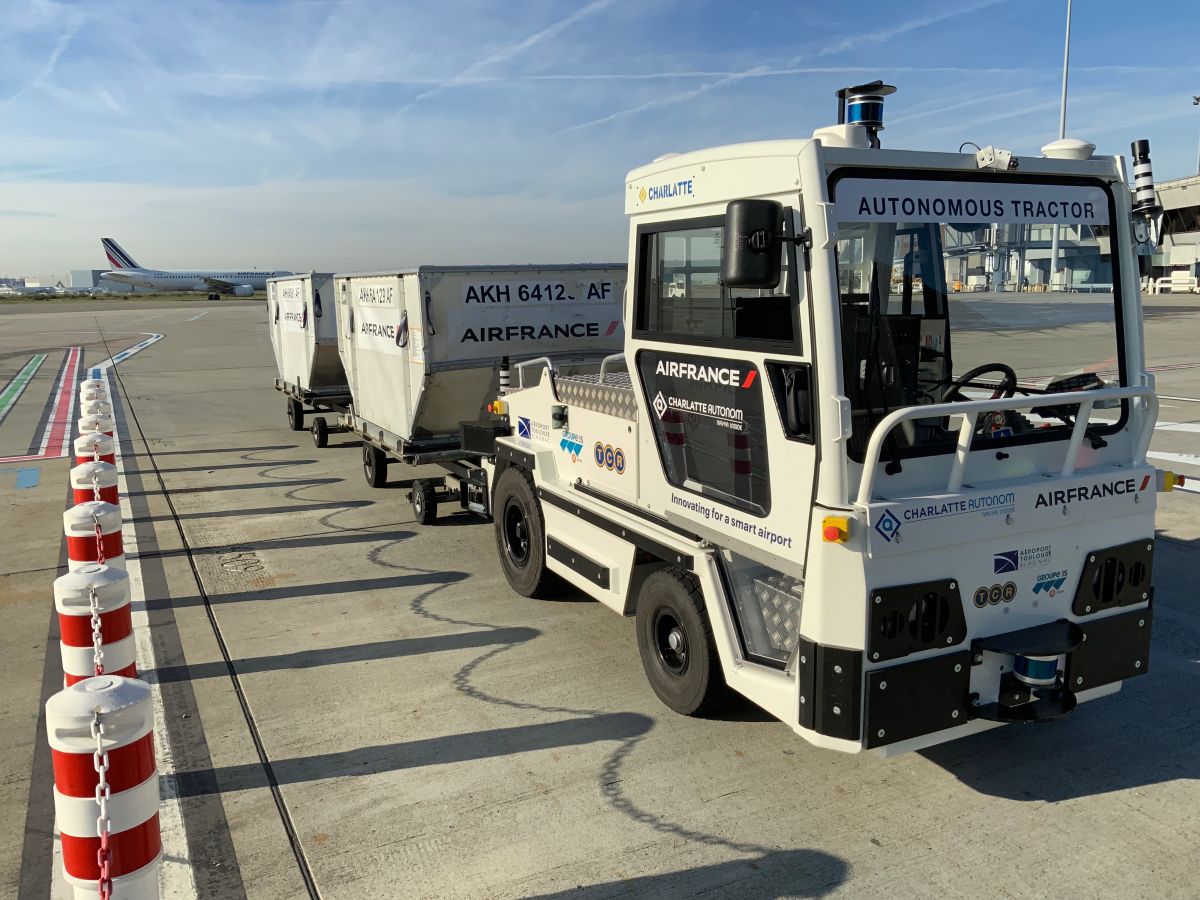 For Vincent Euzeby, head of IT_&_Tech Innovation at Air France, “By facilitating the use of an autonomous baggage tractor and perfectly integrating it into its operational processes, Air France’s ambition is to further optimize its operational performance and improve its customers’ travel experience. This test is the first step to a more widespread roll-out of autonomous vehicles at our airports.”

“We are very proud of this world-first operation highlighting in real conditions the added value of our AT135 autonomous tractor, combining the expertise of Charlatte Manutention and NAVYA. The roll-out on a larger scale of autonomous vehicles should contribute to easing increasingly dense logistics flows”, added Bastien Devaux, CEO of CHARLATTE AUTONOM

“This test is a concrete step to designing the Smart Airport, more innovative, connected and more efficient for our customers. It was only natural that this world first took place at Toulouse airport, the pioneer city of aviation”, added Philippe Crébassa, Chairman of the Executive Board of Toulouse-Blagnac Airport.