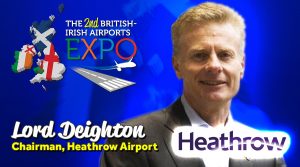 Lord Deighton, who joined Heathrow Airport Ltd in 2016 after leaving his ministerial position at the Treasury where he was responsible for national infrastructure planning, will present the UK-wide procurement and jobs benefits stemming from the £16 billion Heathrow expansion at the official opening of the British-Irish Airports EXPO.

Deighton will also draw heavily on his experience of generating national pride and unity around developments of world importance which he garnered as Chief Executive of the London Organising Committee of the Olympic and Paralympic Games (LOCOG), the organisation responsible for planning the hugely successful £9 billion 2012 Olympics. Lord Deighton will join Birmingham Airport CEO, Paul Kehoe, at the official EXPO Opening, Tour and Keynote Addresses from the EXPO Conference Arena.

To view all the latest news from the British-Irish Airports EXPO 2017 click here.