The Dubai Airshow will be adding new market sectors and increasing the exposure of others when it returns to DWC, Dubai Airshow Site, in November. The addition will include four new sector specific pavilions, Space Pavilion, UAV Summit, Cargo Zone and the return of the Airport Solutions conference, which has been relaunched by F&E Aerospace for 2017.

The Space pavilion will be produced in partnership with the UAE Space Agency, who exhibited for the first time at the 2015 show. Themes for the Space Pavilion Conference will include the Emirates Mars Mission, the Mars 2117 project, the National Space Programmer and Satellites. Under these topics the conference will bring together panels of key industry leaders, who will share knowledge in developing capabilities in the fields of space science, research, artificial intelligence, robotics and advanced space technologies. The National Space Programme will look at genes in space, while the Mars 2117 will address preparing Emiratis for Mars and space exploration, with a view to building the first city in Mars in 100 years.

The global space industry is worth $300 billion, and growing at 8% annually. The UAE’s investments in space technologies have already exceeded AED 20 billion (USD 5.4 billion). The addition of the dedicated pavilion will allow space focussed companies to exhibit together, allowing visitors the opportunity to meet with all manufacturers and service providers in a premium location within the Dubai Airshow hall.

Also new for the 2017 event will be the UAV Summit and pavilion, which will focus on the potential uses of UAVs and address challenges facing the industry in the future. Of particular interest to the defence sector of the aerospace industry, use and abilities of UAVs have been growing exponentially, which presents unique opportunities and additional challenges that the conference will seek to address. Discussions taking place during the two day UAV Summit will include future development and innovation, the opportunities and challenges of civil drone usage, an in-depth perspective on regulations and registrations, and the future of UAVs in the region.

The addition of the Cargo Zone will investigate industry regulations, logistics and support services that are specific to the cargo sector. IATA has forecast an average growth rate of 4.1% per annum with emerging markets and regions predicted to deliver the fastest growth in air cargo volumes over the next five years, led by the Middle East and Africa.

With the world’s leading cargo operator, Emirates SkyCargo, relocating its freighter fleet from Dubai International Airport to Al Maktoum International Airport, this strategically located hub now opens even more doors for business into Europe, Africa and Asia. Dubai Airports Cargo and Logistics head of planning, Youssef Beydoun, will give the opening comments and serve as conference moderator at the Cargo Zone conference, with panel discussions on a wide variety of topics from air cargo safety and security to the vision of e-commerce, facilitation and regulation, among others.

The Airport Solutions conference will return after its debut at the 2015 show, increased in both size and scope for 2017, relaunched by F&E Aerospace as part of the new Airport Solutions Global Series enabling aviation operators to develop a strategy that covers their systems, commercial information, intellectual property and people in addition to aviation activities. Featuring a two-day programme, the conference will offer leading airport developers and suppliers the exclusive opportunity to interface with airports and aviation leaders on the demand side of the growth equation.

“The response to the growth and innovation the 2015 show, such as the Airport Solutions conference, and the inclusion of the space industry was phenomenal,” says Michele van Akelijen, Managing Director of organisers F&E Aerospace. “It is only natural that the show continues to innovate to encompass an even wider range of aerospace markets, remaining the centre of the industry.”

Other features that will be returning to the Dubai Airshow include Gulf Aviation Training Event (GATE) and Futures Day, which will have a new format for 2017. With the increase in features in terms of both conferences and pavilions, the 2017 show is looking on track to broaden its appeal to the aerospace industry, cementing the show’s reputation as an unmissable event in the aerospace calendar. 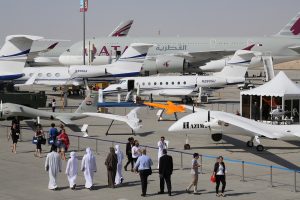