Emirates, Worldwide Partner of Rugby World Cup 2019 (RWC 2019), is proud to announce the arrival of the Webb Ellis Cup in Tokyo. The silver-gilt trophy, presented since the inaugural Rugby World Cup tournament in 1987, was transported on Emirates flight EK318 from Dubai to Tokyo, arriving yesterday to a champion’s welcome.

On touchdown in the host country of Japan, former World Rugby players of the year, Bryan Habana and Shane Williams, stepped out of the Emirates A380 aircraft to present the coveted trophy to Japan’s organising committee. The handover takes place just prior to the 100-day countdown to kick-off of Rugby World Cup 2019 in Japan on 20 September 2019.

To mark the trophy’s arrival, Emirates has announced details of its sponsorship of RWC 2019 in Japan, including the once-in-a-lifetime opportunity for young fans to join the sport’s showcase event as Official Flag Bearers. As part of the RWC 2019 Emirates Flag Bearers campaign, the airline is offering ten fans from Japan, aged 10 to 16 years old, the opportunity to lead teams out onto the pitch, and participate in the pre-kick-off anthem ceremonies for the pool stage matches as well as the quarter-finals, semi-finals and Final match, taking place from 20 September until 2 November 2019 across twelve host cities in Japan. Young rugby enthusiasts can look out for the special competition for an opportunity to become a Flag Bearer for one of the world’s largest sports events. Details will be announced shortly.

In addition to the Flag Bearers from Japan, Emirates will be running similar competitions in international markets to recruit youth to join the matches in Japan, from international markets such as the UK, France, Ireland, Argentina, South Africa and the United Arab Emirates. The airline is also extending this money-can’t-buy opportunity to its loyal customers by inviting members of its frequent flyer programme, Emirates Skywards, to nominate their children in the same age group to become Flag Bearers.

As a Worldwide Partner and in support of the RWC 2019 Volunteer programme, Emirates will be extending special benefits to the 14,000 volunteers selected to provide a range of crucial services before and during the tournament.

The fun and excitement in the lead up to RWC 2019 in Japan will also see the Webb Ellis Cup setting out on a tour of Japan. Emirates is offering rugby fans a chance to win a range of Emirates-branded RWC 2019 merchandise via a #EKSpotTheTrophy contest to be announced shortly.

To help ensure that jet-setting rugby fans do not miss any of the Rugby World Cup 2019 action, Emirates will be screening the competition’s matches live in the air on its dedicated in-flight sports channel, Sport 24, available on the airline’s award-winning in-flight entertainment system, ice. Emirates currently has 175 aircraft equipped with Live TV including all Boeing 777 aircraft with Economy Class customers enjoying the industry’s largest in-seat screens at 13.3 inches, while Emirates’ Business Class screens, at 23 inches and the 32-inch First Class screens remain the industry’s largest for its class.

Emirates will also be screening the matches live on the 55-inch screen at the iconic onboard lounge on select A380 aircraft. Customers travelling in First and Business can join other rugby enthusiasts at the most popular social spot at 40,000 feet and cheer on their favourite teams while enjoying a unique selection of spirits or cocktails. Fans can even stay connected to tournament news and highlights, with Emirates offering passengers up to free 20MB of Wi-Fi data on its aircraft.

Boutros Boutros, Emirates’ Divisional Senior Vice President, Corporate Communications, Marketing and Brand said: “Rugby World Cup is one of the world’s greatest major sporting events and more than 1.8 million fans are expected to attend the tournament in Japan over a six-week period, with over one third comprised of international fans the largest ever number in the tournament’s history. With such a global audience, we see Rugby World Cup 2019 in Japan as a great platform to share the love for rugby and bring communities together.”

“Through our RWC 2019 Emirates Flag Bearers campaign, we are proud to give young rugby enthusiasts an unforgettable experience and a deeper connection to the sport of rugby. This is a part of our greater efforts to encourage fans from Japan and all over the world to come together and celebrate the sport’s centrepiece event,” continued Boutros.

In the sport of rugby, Emirates has a rich heritage and an extensive portfolio of top-class sponsorships. Its long-standing association with World Rugby began when it first sponsored Rugby World Cup 2007 in France as a Tournament Sponsor, before becoming a Worldwide Partner for Rugby World Cup 2011 in New Zealand. Emirates later became the first Worldwide Partner to sign an agreement for both Rugby World Cup 2015 in England and 2019 in Japan. Furthermore, Emirates’ history of supporting global rugby events spans more than 20 years, bringing people and cultures together through a shared passion for the sport.

World Rugby CEO Brett Gosper added: “It is always a special moment when the famous Webb Ellis Cup arrives in the host country ahead of a Rugby World Cup, and today marks a historic moment for rugby as for the first time the tournament will take place in Asia. We thank Worldwide Partner of Rugby World Cup 2019, Emirates, for ensuring the smooth arrival of this precious piece of silverware into Tokyo.”

“We have already seen the inspirational impact this iconic trophy has had on its travels across the globe, especially in emerging rugby nations such as India and Brazil, and we look forward to sharing it with all corners of Japan ahead before arriving at Tokyo Stadium for the kick off of Rugby World Cup 2019 on 20 September,” continued Gosper.

With a firm belief in creating memorable travel experiences and providing world-class hospitality and service on board its flights and across its lounges, Emirates invests heavily in a premium spirits offering that complements its menus to suit all tastes and preferences. As a Worldwide Partner, Emirates will feature top quality wines, including champagne and vintage port, that are also served on board, at its hospitality chalets at Rugby World Cup 2019 matches in Japan.

Rugby fans travelling to Japan on Emirates flights to Tokyo and Osaka can look forward to premium beverages hand-picked by its dedicated wine connoisseurs. Spirits such as Hennessy cognacs are served in all cabins in addition to the exclusive Hennessy Paradis in First Class and, for a limited period on select routes, the rare Hennessy Paradis Impérial. As the number one global partner of Dom Pérignon, Emirates serves Dom Pérignon 2008 exclusively on its flights. Passengers can also enjoy Dalmore King Alexander III, the only single malt Scotch whisky in the world created using a unique six-cask finish in First Class and Jura Superstition in Business Class. 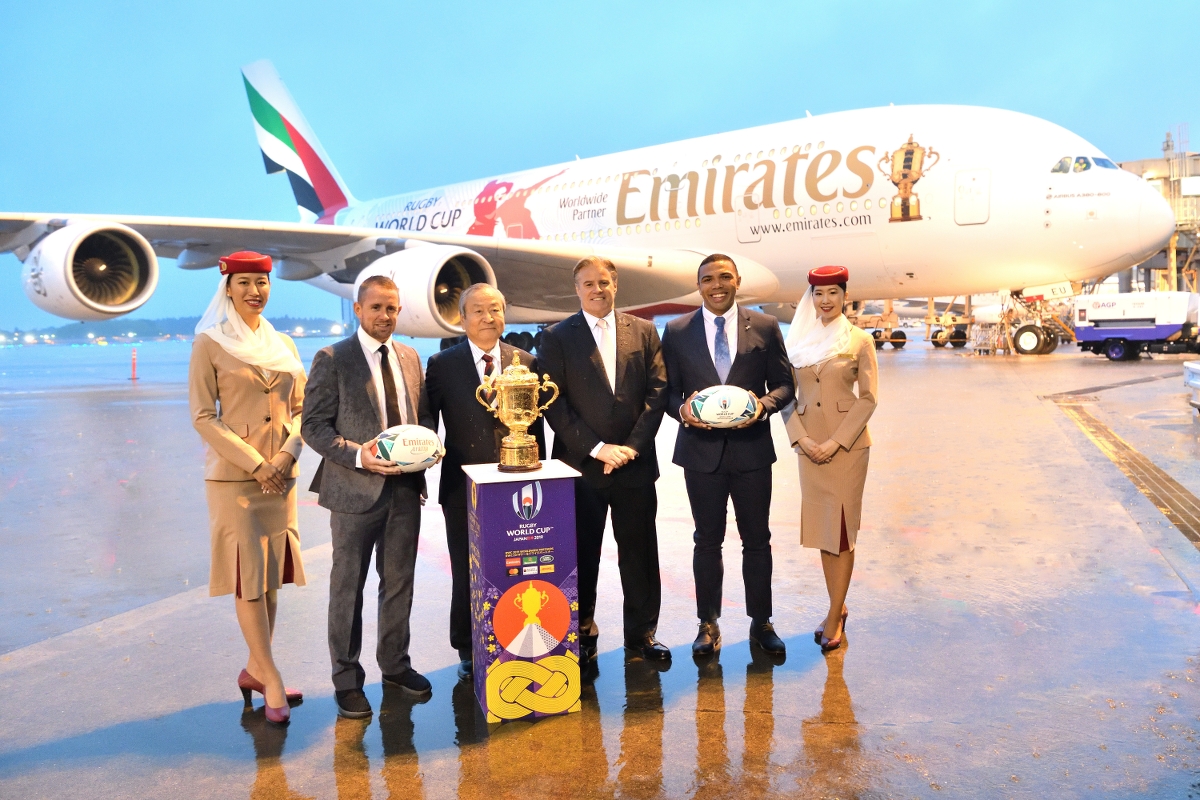 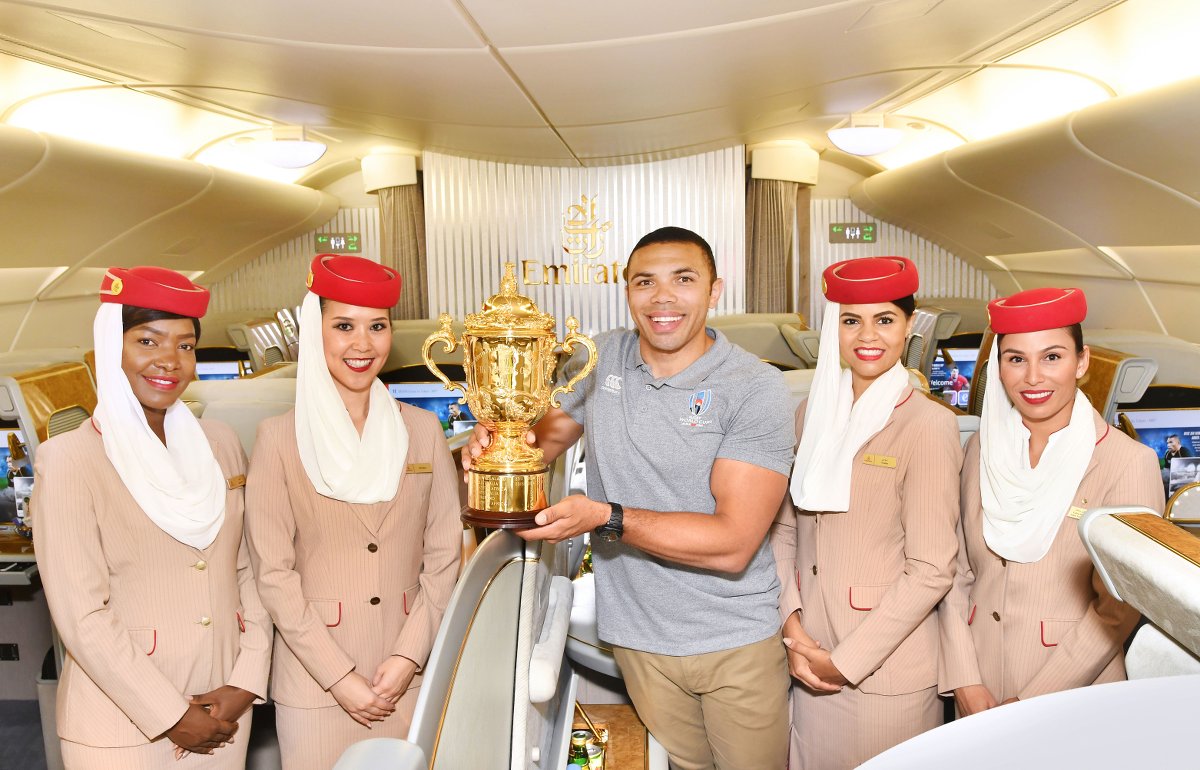 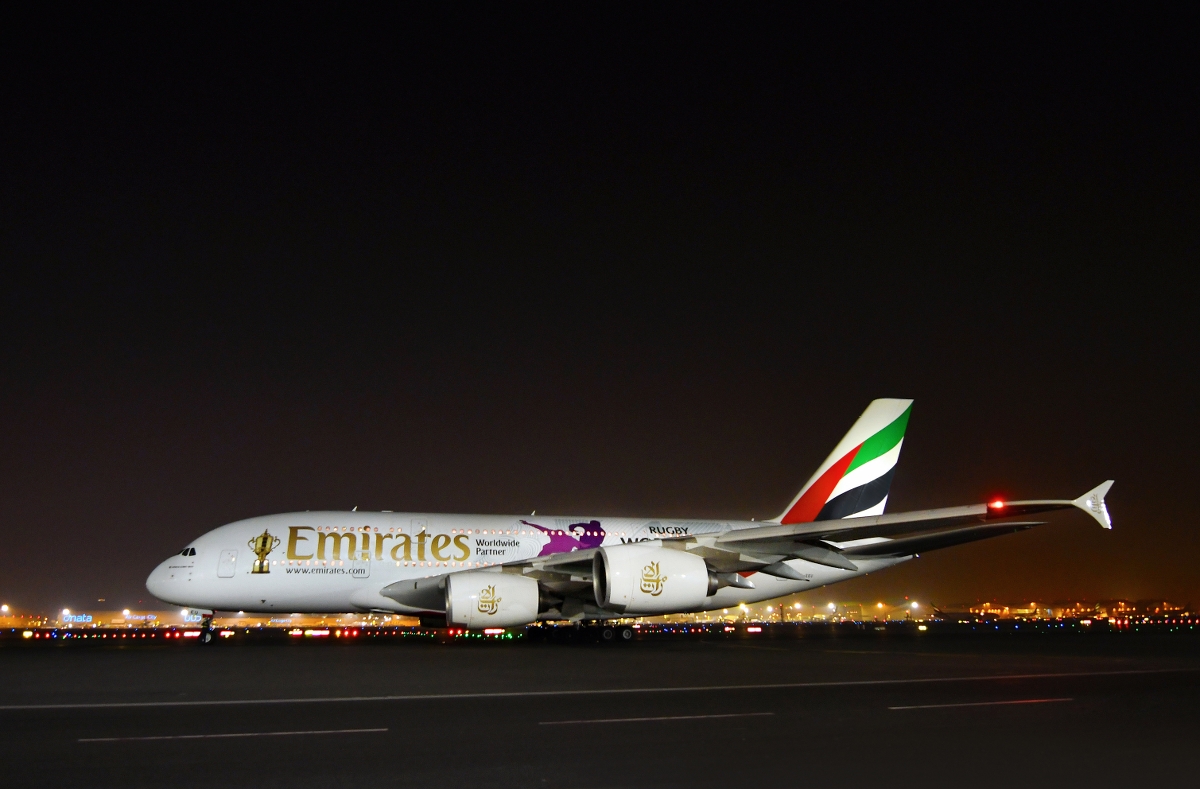