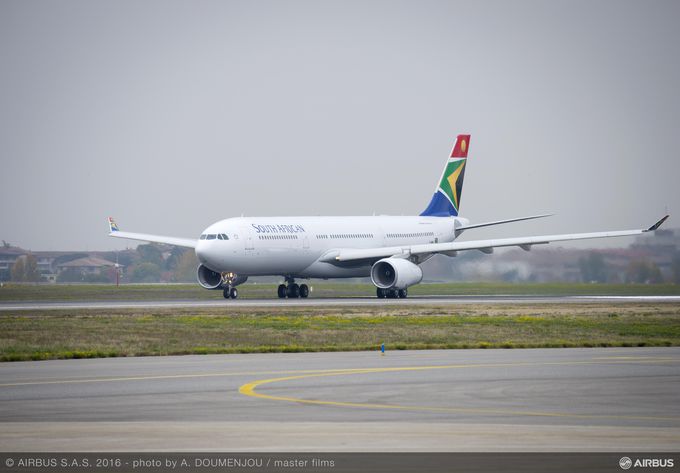 SAA’s A330-300 are configured in a comfortable two-class cabin layout with 46 seats in Business Class and 203 in Economy class seats.  The aircraft will introduce new levels of onboard comfort, including connectivity for SAA’s passengers and enhanced operating efficiencies for the airline.

SAA has selected the latest 242-tonne Maximum Take-Off Weight variant of the A330-300, which incorporates a new aerodynamic packages enabling the aircraft to cover distances of up to 6,350 nautical miles (11,750km) in flights up to 15 hours in duration.  This payload/range capability allows the aircraft to be deployed across SAA’s long-haul, intra-Africa and peak domestic routes.

The A330-300s share the same cockpit configuration, operating philosophy and procedures with SAA’s existing fleet of Airbus widebody jetliners.  This high degree of commonality across the fleet is fundamental to achieving low operating, maintenance and training costs.

The A330 Family, which spans 250 to 300 seats, has attracted over 1,630 orders, with over 1,300 aircraft delivered to more than 100 operators worldwide, including SAA.  The A330 is one of the world’s most efficient aircraft with best-in-class operating economics and average on-time dispatch reliability above 99 percent.