With the start of the first demonstrations in June 2019, the SESAR Joint Undertaking Gulf of Finland (GOF) U-space project in Estonia and Finland is soon entering the next important phase. Seven advanced drone operational scenarios including both manned and unmanned aircraft in shared airspace demonstrate many of the most attractive use cases, relying on U-space services to be safe as well as cost effective with the aim to accelerate the realisation of a shared U-space in Europe, starting with low-level airspace. The very first demonstration – urban drone fleet operations with police intervention – will already take place in Helsinki on 4 June 2019.

After months of preparation, the SESAR GOF U-space project is soon entering the next phase with the start of the first demonstrations in June 2019. Urban drone fleet operations with Police intervention will kick off the demo series in Helsinki, Finland, on 4 June. This is followed by a long-distance multisensory inspection flights in forestry in Asikkala, Finland, on 6 June and drones, model flyers, and manned aviation will be sharing airspace in Pyhtää, Finland, on 11 June. The trials will continue in Estonia, where on 14 June, urban drone operations are demonstrated in controlled airspace in Tallinn, followed by powerline inspection in Läänemaa rural areas on 26 June.

In August 2019, the GOF U-space demonstrations will be continued with maritime search and rescue exercise with the border guard on 13 August in Hiiumaa, Estonia, and on 22 August, international parcel delivery with drones over the Gulf of Finland will take place between Torbacka, Finland and Muraste, Estonia. The demonstration series will be completed by an urban Volocopter air taxi flight from the Vantaa international airport to Helsinki on 29 August 2019. These trials will be open to qualified visitors. 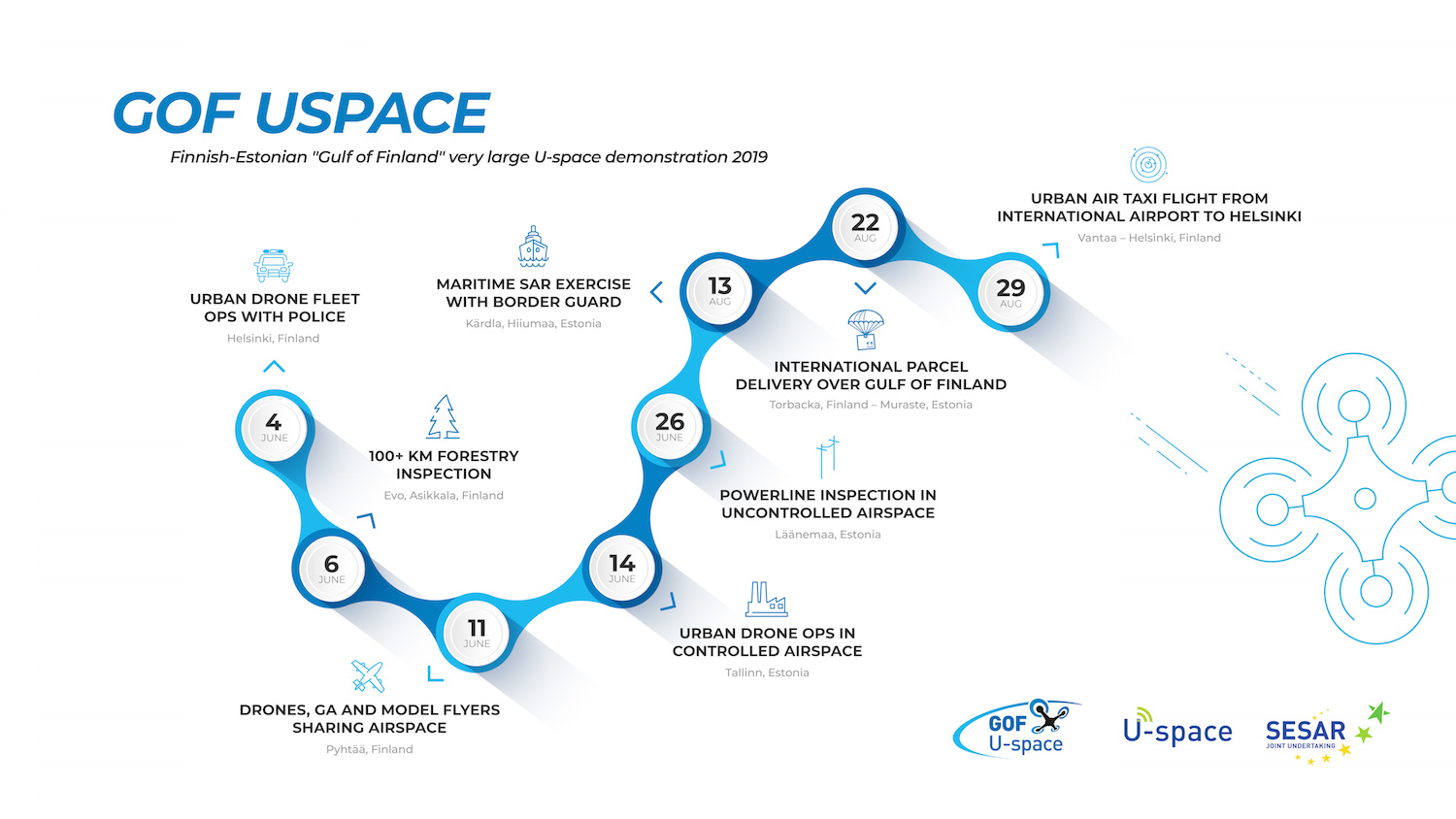 The GOF U-space project with a broad consortium of 19 members demonstrates that Europe is on course with its implementation of U-space, an initiative that aims to ensure safe and secure drone traffic management, taking into account the rapid growth in the use of drones. The GOF concept enables shared situational awareness for all aviation stakeholders. The success of the project is based on deep Air Traffic Management (ATM) experience of all consortium members, including three world-leading UTM (Unmanned Traffic Management) technology vendors and two Air Navigation Services Providers, developing interoperability and data-sharing solutions which are aligned with SESAR’s overall U-space architecture. Please find further information in this Press Release.