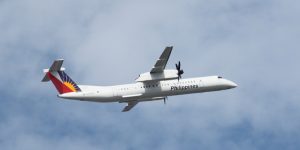 Based on the list price of the Q400 aircraft, the firm order is valued at approximately US $165 million and could increase to US $401 million, should Philippine Airlines exercise all its purchase rights.

“With the lowest seat-mile costs in the regional aircraft market, the extra-capacity, two-class Q400 aircraft will offer Philippine Airlines significant opportunities to differentiate itself competitively,” said Fred Cromer, President, Bombardier Commercial Aircraft. “The Q400 aircraft is the ideal solution for the airline as it develops its domestic operations network from secondary hubs and increases intra-island connectivity.”

“As we strive to become a top-rated airline, the Q Series family of aircraft has enabled us to develop our business model into one which efficiently meets our domestic route requirements while providing our passengers with a full service onboard experience”, said Jaime J Bautista, President and Chief Operating Officer, Philippine Airlines. “We are proud of our collaboration with Bombardier and welcome the first modern and innovatively configured two-class, 86-seat Q400 aircraft to our growing fleet.”

The five firm-ordered Q400 aircraft are expected to be delivered throughout 2017.

Thanks to its combination of turboprop attributes, jet-like features, industry-leading passenger experience and environmental footprint, the Q400 aircraft is exceptionally versatile and can be adapted to a variety of business models. By offering a 30 per cent reduction in fuel burn over the jets it often replaces, the Q400 aircraft radically reduces carbon emissions and increases cost efficiency. Its high-speed cruise — 160 km/h faster than conventional turboprops — places the aircraft’s flight time within minutes of jet schedules, at the same seat cost as larger single-aisle jets. Its large propellers operate at a lower RPM, generating more power with less noise and making it a friendly option for city centres.

The Q400 aircraft family includes over 60 owners and operators in almost 40 countries. The worldwide fleet has logged more than 6.9 million flight hours and has transported more than 429 million passengers. Long recognized as a high-value asset by operators, the Q400 aircraft is now also attracting growing interest from the leasing community.

Bombardier has recorded firm orders for a total of 571 Q400 aircraft.